HIGH The judgement videos. Every one of them.

“Don’t worry too much about the story.”

This instruction is given at the end of Senran Kagura: Bon Appetit‘s intro, and rarely has a piece of advice been so useful. The plot — a cooking contest where sexy ninja vie to win a magic scroll that grants wishes — is complete nonsense. The characters even point this out time and again, reinforcing the idea that Full Course should not be judged based on its plot… as if that was ever going to happen.

Senran Kagura: Bon Appetit! Full Course is a rhythm game in the DDR mold. Best played with a controller, the cooking competitions are three-stage events timed to last the length of a single song. At the beginning, a dish is announced, and by matching button inputs, the player will ensure that their character keeps to the cooking beat, making the largest and most delicious dish possible.

The gameplay has a good grasp of rhythm basics — there are two tracks, with buttons and D-Pad directions sliding in from the right towards the ‘perfect’ zone at the far left. The three levels of difficulty also do a fantastic job of keeping the game accessible to all skill levels. On the lowest, it’s just about keeping an eye on one or two notes at a time. Normal expects players to be able to keep up with the beat while watching the symbols, and expert takes the button count up from six to eight and adds a huge number of extra presses, ensuring that only the truly nimble-fingered will survive. 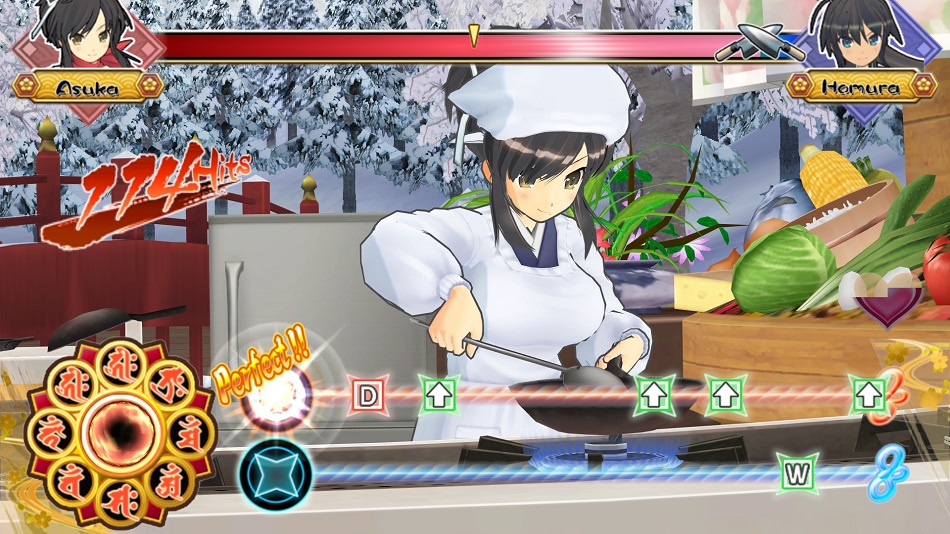 The biggest challenge, though, is the animation that plays along with the song. Intended to distract players from the beat lines, the video is salacious footage of various female ninjas cooking while employing some of the most over-the-top breast-bouncing physics around.

Full Course is never shy about playing up the cheesecake — each of the three segments of a song are judged, and whichever character loses will have the clothes ripped off of her body. If the player wins all three rounds, they’re treated to a masterwork of playful objectification wherein their opponent is stripped naked and presented as a dessert, with the only form of censorship being some artfully-placed whipped cream and fruit.

In addition to solid rhythm gameplay, Bon Appetit has plenty of bells and whistles, offering a dressing room to doll up the characters in thousands of possible costume combinations they can create by unlocking outfits through gameplay. The story, while largely superfluous, is far more entertaining and well-written than it needs to be, managing humor, wit and self-awareness without risk of offending anyone. This is the rare case of a piece actually managing to wink at its own sexism while also reveling in it.

Yes, this is a rhythm game about sexy ninjas cook-fighting until one of them ends up naked. It’s ridiculous and it’s perverse, but it’s not ashamed of itself — this is bold and playful erotica that doesn’t skimp on the gameplay just because it skimps on the clothing. Rating: 8 out of 10

Disclosures: This game is developed by Meteorise  and published by XSEED. It is currently available on PC, Vita. This copy of the game was obtained via publisher and reviewed on the PC. Approximately 6 hours of play were devoted to the single-player mode, and the game was completed.

Parents: According to the ESRB, this game is rated Mature, and contains sexual themes, nudity, and language. It’s naked woman fighting each other via cooking. No, don’t let your children near it. Are you crazy? Don’t even let them know the game exists. Yes, the ‘naughty bits’ are always covered, but still.

Deaf & Hard of Hearing Gamers: It’s a rhythm game, so you’re going to have trouble. You can still time the button presses well enough visually, but the beat helps a lot with the timing.

Colorblind Modes: There are no colorblind modes available in the options, and this could create some problems since the game color-codes the buttons which need to be pressed based on Xbox buttons – BYGR. It also color-codes the D-Pad directions according to their association with the buttons. You’ll still be able to read the labels, but it’s going to be an issue.