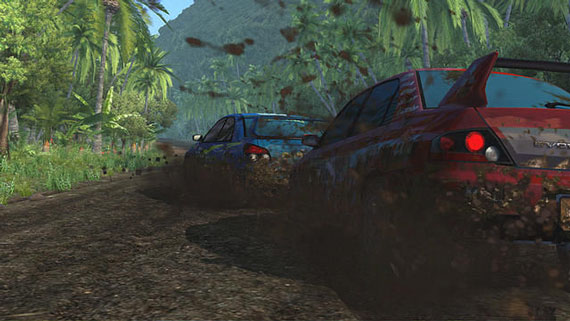 Good evening all, welcome to the Demo Critic, where I, the titular critic, judge videogames based on the small portions that their developers and publishers see fit to release over Xbox Live Marketplace. Today's subject? Sega Rally.

Sega Rally's demo served a valuable purpose beyond just giving me a chance to try the game out. It reminded me that the arcade sim racer genre still existed. Back in the heyday of arcades, people lined up for literally minutes to sit in a comfortable molded plastic chair and drive a few laps around a Daytona track. Hovering between simulation and arcade gameplay, the arcade sim racer provides an air of veracity, free from nitro boosts and automatic weaponry, without ever asking the player to tweak a gear ratio or alter tire pressure. Once a popular genre, the arcade sim racer has fallen out of favor of late, mostly because console gamers expect something more from their games than the ability to circle a track a few times. They want depth, either whether it's painstaking detail of Gran Tourismo or homicidal exhuberance of Burnout.

There's nothing particularly wrong with the Sega Rally demo. The driving controls feel right, and the two tracks available are pretty enough. I especially enjoyed the lack of a time limit, as the game allowed me to retry the races as many times as my fancy saw fit. Another nice touch was the way my navigator called out each upcoming turn, and the unobtrusive graphic that accompanied the information, in case I was hard of hearing. I know I've criticized the focus people put on graphics, but I doubt it would be possible for anyone to not enjoy watching layer after layer of grime spatter all over my car's chassis as I slid across dirt and mud.

The problem with Sega Rally's demo, though, is that it doesn't manage to make any case for its existence. While I'm sure there will be plenty of cars and tracks available, I can't imagine there be ingenough to overcome the dull repetition of the gameplay. The only grace I can imagine saving this game is if, somehow, the multiplayer mode manages to become an international sensation. Sadly, the demo only offered single player racing, which goes a long way to explaining how unsatisfying it is. After all, it was never fun playing Daytona against the computer, either.

I agree with you, i think in this time and age of gaming games like these are showing a lack of challenge. Gamers indeed want more

Multiplayer could do it some good