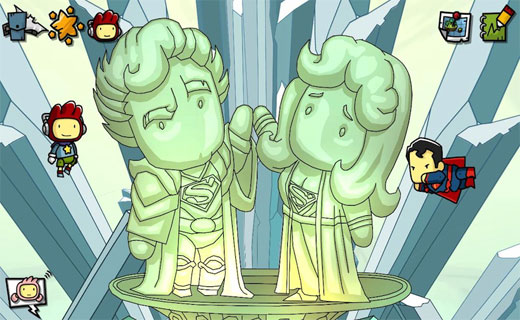 HIGH Is that over 30 different Batmen?

LOW Spending 20 minutes at the end trying to figure out what word the game wants me to type.

WTF Where have you gone, Mr. Tawny?

Scribblenauts Unmasked offers players a bold premise—any DC comics character they can name can be summoned into the game’s world to interact with Maxwell, the series's main character. Whenever Maxwell is faced with a obstacle to overcome or a problem to solve, he can simply invite a famous hero or villain to help out! This sounds like a thrilling idea, but it becomes immediately apparent that the developers have absolutely no idea how to use these characters within the framework of a Scribblenauts game. When called, these heroes and villains aren't much good at anything but punching one another, and as such, Unmasked puts a huge focus on combat. Unfortunately, the game is completely incapable of delivering this combat in a satisfying manner.

The game's plot kicks off when Maxwell and his sister Lily attempt to determine which superhero is the best. They use a magic notebook to create Gotham City and go there. Suddenly trapped in a world of comic book characters, Maxwell must battle his evil doppleganger and a host of supervillains in order to foil a plot to conquer the multiverse! In each of the game's 13 levels, Maxwell will find a situation in which a DC hero requires help defeating one of their main villains. These quests are set up in the traditional Scribblenauts fashion, and broken down into around four simple situations that have to be solved by making an item or character appear by typing any word the player can think of. Is someone hungry? Write ‘sandwich’. Can’t clear that jump? Type ‘jetpack’.

In these sections the main 'puzzle game' aspect of Unmasked works best, as the quests' relatively linear construction nudges the player towards what they should write without making it painfully obvious. With just over a dozen missions in the game, Unmasked would have been criminally short without some means of padding out the running time. The padding the developers chose was making the player unlock new locations by spending points accrued from random tasks. It's these tasks that bring it all crashing down.

Where Scribblenauts Unlimited had nearly 40 areas with at least one quest and a handful of single-item-solution tasks that were crafted for the environment they took place in, Unmasked claims unlimited replayability with randomized tasks that refresh every time the player enters an area. Unfortunately, the tasks are seemingly drawn from a common pool, with only the characters changing based on the location. As a result of this design, everything feels interchangeable, repetitive, and unimportant. Whether the game of musical chairs involves Batman's supporting cast or that of the Green Lantern, it's the exact same musical chairs. I played Unmasked for just a few hours, and on seven different occasions a vampire standing in front of a mirror asked me to show her what she looked like. The fact that nearly half of these quests involve a villain showing up and attacking Maxwell just heightens the repetitiveness of the experience.

This brings me to the game's combat, which as I mentioned earlier, is terrible. There's really no way to sugar-coat this. Every time the player is asked to fight (which is often) it leads a boring, confusing disaster. Every fight proceeds the same way: a villain shows up and starts attacking Maxwell, who can either generate a weapon to use himself, or he can call in reinforcements. Neither is a good option. Fighting involves trying to click on erratically-moving papercraft sprites as they fire unerringly accurate weapons at Maxwell. Calling for help just adds another erratic sprite to the mix, flitting about throwing punches or using beams to slowly sap health from the opponents until none remains. A huge part of what makes this all so terrible is that little work has gone into balancing the characters based on their powers. Yes, Superman is invulnerable, but he doesn't do much more damage than anyone else when punching foes. Get Aquaman into a fight underwater and he won't call fish to aid him, which is basically all he's known for. There's no nuance or entertaining visuals to the fighting, it's just the digital equivalent of a child mashing action figures into one another until they get bored and dub one the winner.

Worse than the combat is the 'bonus mode', in which 5th dimensional imp Mr. Mxyzptlk will offer to double a level's scores provided the player can operate within a set of restrictions. This ought to have been a clever way of asking gamers to think outside the box and challenge their creativity, but the game (again) completely drops the ball since many of the restrictions make completing tasks impossible. How is only using female super heroes going to get a key out of an unbreakable cage when I can't ask them to pick things up or give them to me? How can I possibly accomplish anything if no matter what I type, a random object appears?

Scribblenauts Unmasked has a mildly diverting quest mode, but everything else about it is so sloppily constructed as to be borderline unplayable. That being said, it holds a lot of value as a repository of DC knowledge for anyone with a passing interest in comic book history. I managed to get some measure of enjoyment playing 'stump the game' as I typed in various obscure heroes and villains to see just how deep its roster went. It would have been nice if the main game had managed to capture some of this simple fun, but any title where the most entertainment is gleaned by having players randomly type words into a parser can be largely considered a failure. Rating: 5 out of 10


Disclosures: This game was obtained via publisher and reviewed on the PC. Approximately 5 hours of play was devoted to single-player modes.

Parents: According to the ESRB, this game contains comic mischief, cartoon violence. Go for it— harmless cartoon violence, normally salacious costumes are rendered inoffensive by the papercraft art style, naughty words aren't recognized by the parser… Even Will Magnus doesn't smoke a pipe in this world. A totally acceptable game for even younger kiddies with an appreciation for DC.

Deaf & Hard of Hearing: You will be super —no audio cues and all mission briefings are in text! The only drawback? The opening and ending cinematics don't have subtitles.