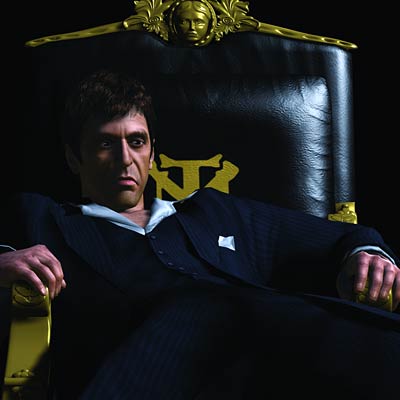 Right off the bat, Scarface does something smart by establishing that it isn't going to be a simple adaptation or an attempt to retell the film in game form. No, Scarface: The World is Yours is more of a concept piece, one that dares to ask the question, 'What if Tony Montana, rather than being a mercurial borderline sociopath on a seriocomic journey to self-destruction, were a videogame character?' Well, obviously he'd be able to walk over a health pack to seal up bullet wounds and replace lost blood, making the film's climactic shootout entirely more survivable than it otherwise might have seemed. And as Tony escapes from his mansion into the night, a status screen shows up, and all of his accomplishments are stripped away, leaving him a 'Level 1' crime boss. It's almost as if the developers are saying 'Yes, we all know it's a videogame, so please just relax and enjoy the ride.' Luckily, the ride they've provided is, in fact, fairly enjoyable.

A third person driver/shooter in the Grand Theft Auto mold, Scarface picks up the story where the film (hadn't quite) left off, with a humbled Tony Montana returning to Miami and rebuilding his empire one drug deal at a time. This is accomplished through fairly standard videogame means. Driving around to pick up and deliver things, shooting rival drug dealers to death, and generally just being a poor citizen.

Despite the stellar lineup of voice actors acquired for the game, and the fact that quite a bit of money was obviously paid to obtain Al Pacino's likeness for the main character, the game is extremely light on story. There's no plot to speak of beyond the simple revenge story, and precious few characters to meet over the course of the game. As part of 'taking back Miami', Tony has to convince the owners of various businesses to act as his drug-selling fronts, which is accomplished by completing a scripted mission. After these missions are finished those characters are never seen again, though. While Tony can, at any time, engage in side-missions to increase his bankroll and reputation, these missions are all completely plotless driving and murder exercises that don't add to the game's story at all. On the upside, though, the story is extremely well written, and does an excellent job of matching the film's tone and sense of humor, without ever sinking into the easy route of self-parody.

Two of the game's larger flaws are its brevity and the repetitiveness of its structure. Each of Miami's four districts is 'taken back' by first completing the four missions that unlock legitimate business 'fronts' for purchase, followed by a full-on assault on the enemy's drug distribution hub. Beyond a quick jaunt to the Caribbean to meet drug suppliers and an endgame shootout that can only be described as sadistically difficult, the game is only twenty missions long. Heck, players can't even wander around blowing people away, because the game won't let Tony murder innocent civilians, and there are fairly severe in-game consequences to going on any other kind of shooting spree.

The game's biggest problem, though, is the way the developers elected to stretch out the playing time. All 'fronts' are gained by not just completing a mission, but actually purchasing the business, which invariably costs far more than the player can earn playing the main or side missions. No, the only way to earn that kind of money is to play drug dealing missions, which are needlessly complex. First Tony is forced to perform a random generic mission to meet a drug dealer, then play a minigame to buy the drugs, then safely return the drugs to their warehouse, then drive around to every single front he owns to collect the cash. Doing this just once can take up to twenty mintues, and before the game was done I was forced to deal drugs nearly a dozen times. It's fun once or twice, but by the fifth time I found myself driving the same route to the same fronts to collect cash it was getting very old. Eventually I started to wonder, if I was the head of a drug empire, couldn't I be paying someone to do all this stuff for me?

So that's what's wrong with the game—what does it get right? Basically everything else. The driving controls are stellar, and the shooting mechanic is among the best I've ever seen in the genre. Since Tony is invariably fighting dozens of foes single-handedly, the game gives him a couple of advantages. First, targeting bad guys is a breeze. Press a button and Tony locks onto the nearest enemy, and aims at their chest. A simple flick of the right thumbstick will switch the aim to the closest enemy in that direction, while slowly moving the thumbstick allows Tony to fine tune his aim within the lock-on, targeting his opponents' head, arms, and legs. I was impressed by how well the shooting worked, whether I was in a running gun battle with five guys in an alley, or blasting away at a speedboat, trying to target the driver.

Perhaps the biggest difference between this and a normal GTA-style game is the fact that there are concrete penalties to causing large amounts of mayhem. For example, if Tony wreaks too much public havoc, the police begin trying to catch him, and he can only avoid them by escaping both the area where he committed the crime, and the cars tailing him. If he doesn't escape within a certain amount of time, the cops pull out all the stops, and the chase becomes inescapable, ending only with Tony's death. While this death doesn't end the game, it does strip Tony of all the drugs and cash he was carrying, so if Tony plays a mission too recklessly, he can find himself going completely unrewarded at the end of it. All of this conspires to force the player into a more careful and strategic style of play than the genre normally calls for. To me it was a breath of fresh air, but it might anger those looking for the splatter.

Scarface proves once again that old adage that everybody other than Rockstar understands game mechanics better than Rockstar, so while it may not satisfy as an overall gaming experience, there's never a moment that playing it feels like anything other than a pleasure. The racing, shooting, even the hyper-gory chainsaw massacring, it's all fun as heck while it's going on, even if it isn't in service to any kind of a greater whole. Despite the huge amount of money obviously spent licensing and producing Scarface, in the end, it's nothing more than an acceptable title. Better written and designed than most, but too short and shallow to stand apart from the crowd. Rating: 6.5 out of 10

What I found more impressive than its police system (which, frankly, I found rather annoying) was that it broke away from the usual structure of the GTA games and their clones. In all of the GTAs I’ve played and spinoffs and wannabes too, your character, despite their freedom of movement and action, functions as little more than a glorified errand boy for the real power players. You may be “moving up” in the criminal ranks, but you’re pretty nearly always doing things for someone. And little are the rewards of the operations. Oh, in later GTAs you can purchase property,… Read more »

Actually you can make comments toward people in San Andreas, although you can’t have more conversations outside of a comment and a response.