I Want to Play a Game. A Professor Layton Game. 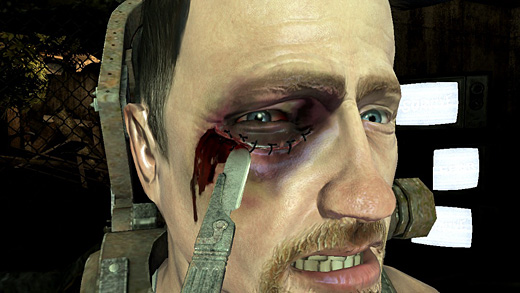 HIGH The opening sequence effectively captures the spirit of the films.

LOW Why am I killing people with Nailbats? This isn't Condemned 3.

WTF There is glass on the floor. The dead people have shoes. I can't take them because…?

There is one narratively interesting thing about Saw II: Flesh and Blood

—a single bit of the game that actually manages to recreate the tense, time-sensitive decision-making that the most harrowing segments of the films are built around.

In the first few minutes of play, the player is offered a choice—struggle against awkward controls and a restrictive timeline to survive a test, or go against every instinct that every video game they've ever played has instilled in them and remain passive while a set of crushing walls reduces them to a bloody pulp. The game's developers are asking the player to actually play the role of a character in a Saw movie, making an impossible moral choice in the face of imminent death. It's a wonderful sequence, and notable primarily for making Saw II one of those odd games that peaks in the first half hour and then drags on for another six.

A sequel to last year's Saw, this sequel picks up almost exactly where the last game left off, in the apartment where Detective Tapp killed himself. After a quick introduction to the main character (Tapp's son) and the various people he'll have to rescue from deathtraps over the game's running time, the player is knocked unconscious by a man in a pig mask and dragged to one of the dozens of preposterously trap-filled buildings that evil mastermind Jigsaw has set up all over the city.

As is to be expected from a game developed in the 10 months since the last title proved to be financially viable, Saw II is largely a rehash of the first game, running the player through a decrepit maze, asking them to solve simple logic and memory puzzles to save themselves and others from Jigsaw's perils. There are improvements on display, however—although "improve" might be the wrong word, since the developers have simply removed or toned down the first game's utterly broken content and offered nothing new to replace them.

Featuring 50% less unbelievably bad combat is certainly a step in the right direction, but even that means that there's still some measure of combat so incredibly out-of-place that I can't fathom how anyone thought it was a good idea to include it. I often find myself defending quicktime events (QTE) sequences as being a necessary mechanic, a way to allow the player to feel they're taking part in actions that are too complex for a two-joystick controller (or human reflexes) to accurately simulate. Then there are QTE sequences like the ones in Saw II—awkwardly timed disasters replacing the simple "block and swing" combat that every other title manages to incorporate as actual, controllable gameplay. 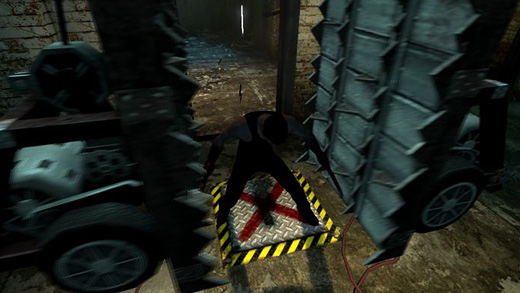 This brings me to the other half of the formula—the puzzles that the player is required to solve as they work their way through Jigsaw's maze. They're all designed competently enough, generally asking the player to observe details in the environment in order to figure out the combination to a series of padlocks. There are low points to the puzzles, like fields of televisions that the player has to walk across, only stepping on certain images, and high points, like the perspective puzzles in which the player has to stand on a certain spot and try to see how random swatches of colour painted on various surfaces turn into numbers when viewed from just the right angle. The puzzles and minigames are fun and effectively serve the purpose of stretching out the playtime, but the game makes the mistake of using them where they profoundly don't belong.

Unlocking a door? Sure, I don't mind rewiring a circuit box to take care of this. But now I'm being asked to keep someone from dying. This should require action a little more intense than trying to press buttons until all the lights on a board have been shut off. Seriously—there's a scene late in the game where a woman's feet are shackled to an elevator that will tear her in two if I don't… solve simple math problems! Then I've got to keep someone from being burned alive by… playing the home version of Classic Concentration!

This simplistic design in what should be setpiece sequences underlines the biggest problem that Saw II has—it fundamentally doesn't do what it needs to in order to work as a Saw game. By removing all choice and moral dimension from the "tests" and turning them into simple timed puzzles, all gravity has been stripped from the situations.

In the most video gamey note of all (not to mention where it diverges furthest from the series), failure isn't an option. Even though the main character's life isn't on the line, if any of the trapped characters die in their deathtrap, the game immediately ends and the player is forced to keep retrying the puzzle until they get it right. When the entire point of the movie series is the way it puts people into terrible situations and asks them to make impossible choices, removing all decision-making from the proceedings seems like a pretty critical error. Heck, there's even a scene where I was forced to save the life of someone who I knew full well was planning to kill me if I let him live.

Even the one choice of consequence that the player is allowed to make, the wonderful moment that starts the game, has a critical flaw that undercuts its effectiveness when the game is considered as a whole. Because the ending the game's main character receives is determined by a choice made by a different character five hours earlier, it means that, essentially, the main character has no agency in deciding his fate, which (again) undercuts the point of the entire plot. Of course, that's something the films do as well, so maybe what I'm thinking of as bad writing is actually just faithful adaptation.

is certainly a huge improvement of the first game in the series, but by no means is it perfect, or even especially good. There's a genuinely solid idea underlying the whole experience, though, and if the series continues into further installments, I hope the developers toss out the more generic elements and challenge themselves to continue down the path this title started on. There's an interesting game to be made about posing thorny moral questions to players and then letting them see the violent consequences of their decisions, but while Saw II isn't that game, Saw III or IV could easily be. Rating: 5.5 out of 10.

Disclosures: This game was obtained via rental and reviewed on the Xbox 360. Approximately 10 hours of play was devoted to single-player modes (completed 2 times).

Parents: According to the ESRB, this game contains blood and gore, drug reference, intense violence, sexual themes, strong language.What are you even doing reading this part? You already know not to get this game for your children. It's based on the Saw movies, and involves people being stabbed, shot, burned, electrocuted, and fed into giant meat grinders. Under no circumstances should any children ever come near this game.

Deaf & Hard of Hearing: The game is subtitled, so you won't be missing out on any of the story—but there are a few audio cues that are going to cause some problems for the hearing impaired. The puzzles themselves are entirely sight-based, but a few of them have strict time limits that are only indicated by a beeping sound—if you can't hear it, there's no way to know how close your chest is to exploding, which can make those puzzles far more difficult.

Is anyone else seeing the ads at the bottom of the review?