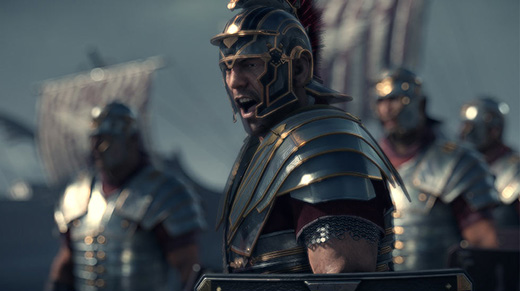 HIGH Nailing a double execution and watching Marius flit back and forth, gutting two men simultaneously.

WTF Is this a shot-for-shot parody of Saving Private Ryan, only with British as Nazis?

dares to ask the question 'what if all of Rome's Imperial age took place over the course of a simple three-act revenge story?'

In their bizarre alternative to the past, Nero lived long enough to sire two sons, one of whom is an emperor from a hundred years into his future. Not only does the game feature British barbarians attacking Rome itself sometime in the first century, but they manage to do it using Hannibal's elephants, presumably conjured through the mists of time via druidic magic. It's as if, when setting out to make a game about Rome, the developers simply threw everything they thought they remembered at a wall, and then grabbed the bits and pieces that could be shoehorned into a narrative.

Luckily, this complete mess of a story is used as the frame for a technically excellent third-person brawler that owes more than a small debt to the muscles, blood, and slow-mo aesthetic of 300 and Spartacus.

Ryse tells the story of Marius, a Centurion who fights in Nero's war to keep the British from rebelling. The vast majority of this fighting is done through a hand-to-hand combat system that has players fighting up to six foes at once by carefully managing a three-button fighting system. No fancy skill trees or multiple weapons here; all the player ever has to do is strike, break blocks, or parry at just the right moment and the day will be won.

The system seems a little basic at first, but Ryse effectively evokes the visceral impact of combat, making each button press feel like a grievous strike. What it lacks in variety it makes up for in the satisfying results of a combo well-done, which comes in the form of the game's dozens of 'executions'. Tap the trigger and suddenly the game slows down as Marius slides inside the opponent's guard and, more often than not, slices off one of their arms before filleting them like a trout.

The executions also function as an interesting buffing mechanic, as players can decide at any time-even during the animation-what their reward for a well-executed limb-severing will be, from health bonuses to extra experience for the kill. At its core this mechanic is essentially a QTE-players have to tap a button corresponding with the colour that the enemy flashes, but the visuals are so gruesomely satisfying, and the game slips back and forth so seamlessly from combat to scripted executions, that it's difficult to hold it against the developers.

What's considerably easier to hold against the developers is the lack of variety in the foes that the player fights over the course of the game.

Years ago, in my review of Dead to Rights 2, I complained about the paltry selection of foes -it was impossible to get through a gunfight without killing the same guy four or five times over. Ryse suffers from the exact same problem, only here it's pronounced to the point of being completely inexcusable. I can't understand how the developers could think that in a game as stunningly gorgeous as Ryse that players wouldn't notice that the incredibly detailed enemy models were repeating ad infinitum-or could imagine that they wouldn't care. This is flat-out inexplicable when one considers that in the game's multiplayer mode the player can choose between dozens of slightly different helmets, swords, and shields to customize their fights. Couldn't a little bit of that customization have worked its way over to the enemies as well? 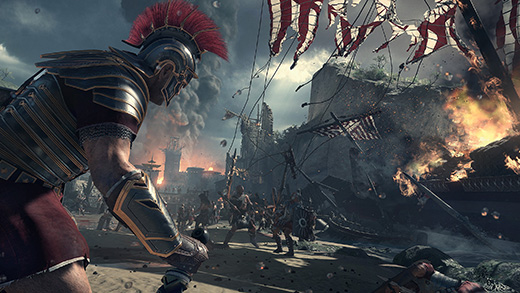 The game is also on the short side. I was able to zip through the story in just six hours, and that was with a considerable number of deaths and watching all of the cut-scenes.

Occasional experiments with other gameplay modes vary wildly in quality-moving and fighting archers as a phalanx is thrilling, while operating a gun turret is shoddy and frustrating, especially due to the fact that the hordes of enemies that rush the player all look exactly the same.

The story, despite its utter lack of educational value, is completely serviceable, with competent writing elevated by some legitimately great vocal performances. As one might expect, both the Britons and the Romans share an accent.

Multiplayer does a good job of padding out some of the game's shortcomings, almost.

Two players can co-op their way through a series of Colosseum encounters, battling catapults and hordes of savages representing famous foes from Rome's history. Giving players a more free-form opportunity to engage in some of the game's excellent combat was a good choice, and the scenarios have enough variation in appearance and mission requirements that they offer a good reason to keep coming back. A small number of them can even be played solo for anyone looking to practice their skills.

There are two issues with the multi, however. The first is that the mode doesn't exactly work at the moment. I had to quit a few online games because an enemy didn't register as 'killed', so the next wave of foes never spawned. Without any timer to kick things off, my partner and I could theoretically have remained there indefinitely. The solo mode has a pretty big flaw as well-every time a mission is completed, the button to restart or switch maps doesn't work, and the player is forced to quit out of multiplayer and restart the 60-second loading sequence.

These are minor bugs that will no doubt be patched out soon enough-far more troubling is the way the game's multiplayer mode has been excessively monetized.

The only way to get new equipment (and thereby speed character advancement) is to collect gold and buy 'booster packs' which randomly drop items. The problem is that so little gold is awarded at the end of each successful battle that getting a shot at a decent item will take at least five missions. Of course, if the player is willing, they could always just buy some of that gold straight from Microsoft, which is exactly what the game is hoping they'll do. The result is a slower, less interesting game for those only willing to pay sixty dollars for the experience.

Ryse has great combat and a decent plot, but the repetitive foes and frustrating multiplayer severely damage the overall package. During my one and a half trips through the game (so far) I haven't tired of slicing enemies to pieces, so the brute physicality of the swordfighting is successful. On the other hand, much of the surrounding elements are shoddy. If Ryse were a longer game full of interesting foes that deserved to be brutally chopped to pieces, it could have been great. Instead, it has to settle for being almost there. Rating: 7 out of 10


Disclosures: This game was obtained via retail store and reviewed on the Xbox One. Approximately 8 hours of play was devoted to single-player modes (completed 1 times) and 3 hours of play in multiplayer modes.

Parents: According to the ESRB, this game contains blood and gore, intense violence, strong language, sexual content, partial nudity. You shouldn't let your children play this game. It's just wall-to-wall violence and foul language. There's no drinking or drugs, but plenty of corpses left out to hang in fields to serve as warning for the faint of heart. There are a number of women whose costumes leave them essentially naked. While the player, for some reason, can't behead people in the game, there are no shortage of severed heads lying around the levels.  Just keep kids far away.

Deaf & Hard of Hearing: I don't think you'll have too much trouble. Audio cues are useful during fights, but not vital to playing the game, and all important dialogue is subtitled. Mission objectives are also clearly marked on screen.

Not criticizing your review, just curious: what is Gamecritics’ position on considering multiplayer as part of a review? Here it is cited as damaging the overall package, but some games it doesn’t get considered at all (Uncharted 3 brouhaha comes to mind).