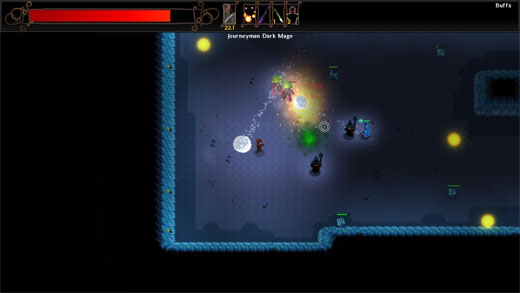 HIGH Finally getting the ability to craft a level three spell!

LOW Having that spell turn out to be a useless rock shield.

WTF That enemy is healing faster than I can damage him. How did this wind up in the game?

The keyboard-and-mouse top-down shooter is a strange duck. Created as a stopgap solution to allow players to approximate twin-stick arcade shooters before the DualShock and its successors, this control system offered an interesting compromise—movement would be far less smooth than in arcades, but aiming would far more precise.

After choosing from between 20 different character classes and the same number of races, players are turned loose into a dungeon that they're determined to reach the bottom of, for not entirely clear reasons. As they kill the enemies that swarm through every room, runes will occasionally fall from corpses—these runes are the key resource required for the game's weapon-building mechanic.

Runes can be immediately turned into low-level spells, used to strengthen an existing spell which uses the same rune as a component, or saved to combine into a more complex and powerful spell later. With ten different elemental runes able to be assembled (up to three at a time) in any combination, there are nearly 300 possible spells in the game. I managed to construct about a and hundred or so, running the gamut from deadly projectiles to powerful shields and a wide variety of temporary buffs. Whether players want to stay far from their foes and toss them around with blasts of pressured air, or to get up close and fry them with electricity, there are powers and attacks for every possible gameplay style… provided, of course, the player wants to spend more than a dozen hours unlocking decent spells through trial-and-error.

While the premise of make-your-own-spell sounds great on paper, the devs have made Runers into the one of the most newcomer-hostile roguelikes I've ever encountered. All but one of the ten starting spells are terrible and will barely get players past the first level. Obviously they want players to craft better abilities, but even if players find some runes early on, they can't just be combined into a new spell. Players have to 'learn' new spells by finding a 'combiner' on certain powerful enemies, and only by employing that single-use item can they find out what mixing runes creates. On the upside, once players know the recipe for a spell, they can construct it (with the resources) immediately on subsequent playthroughs.

Further increasing the problems I had with the game's design, only a handful of the two-rune combo spells are effective, and it's far too difficult to find the 'triple combiner' necessary to build one of the over 200 three-rune spells. Since these combiners are so incredibly rare, players are more likely find one by beating the first boss on level three before they'll collect the requirements to craft one on their own. It wasn't until I'd played the game for fifteen hours that I finally managed to experiment my way into a useful 3-rune spell that made the game playable, and I can't imagine many non-reviewers willing to put up with that kind of frustration.

Honestly, Runers is one of the most poorly-balanced games I've ever played. Even on the easiest difficulty level it's crushingly difficult, but not in ways that skill and practice can allow players to overcome. Every one of the combat arenas is packed full of enemies that charge at the player full-speed, ready to do huge damage. No thought at all has been given to placing restrictions on random enemy placement, and I lost count of the number of times I entered a room only to find myself already surrounded by a pack of enemies.

If I happened to have entered the room with full health there was a good chance I'd be able to cast a few spells and fight my way clear, but most of the time I'd just die immediately. The combat arenas that make up most of the dungeons can't be escaped until every enemy within is dead, so stumbling in a room with powerful enemies means a quick—and massively unfair—game over. In an even more egregious mistake, some of the 'powered-up' enemies can heal themselves faster than low-level spells can damage them. A few times I found myself forced to quit a run because I was stuck in a room with a functionally unkillable foe.

The aesthetics of Runers don't do it any favors, either. The environments and enemies are the definition of Generic Fantasy Setting. Giant rats and evil wizards come in a variety of shades, and thieves/ninjas/zombies are built with so few pixels that it was hard to tell them apart if I didn't go into the game's settings and turn on the names that float underneath them. There's even an evil Moai head in there, presumably because that's the one unusual thing that shows up a lot in other video games. Only the bosses showed any signs of creativity or interesting design, but since I only ever saw five of them, I can't even call that a high point.

Runers has an interesting crafting mechanic and a truly staggering number of weapons, but beyond that, there's just nothing much to recommend. Maybe if the developers made new spells a little easier to earn, players would be encouraged to keep coming back and trying new things. Sadly, the unlocking curve is so incredibly long that I can't imagine many people going to the trouble. I can't fathom why Runers's developers made a game with so much content, but then turned around and guarded it so jealously.

Honestly, once I'd unlocked all of the two-rune spells and looked down the barrel of another hundred hours of diminishing returns, it became clear that the people behind Runers weren't particularly interested in having me finish their game. So I didn't. Rating: 4.5 out of 10


Disclosures: This game was obtained via publisher and reviewed on the PC. Approximately 25 hours of play was devoted to single-player modes, and the game was not completed.

Parents: The game is not rated by the ESRB, but it contains blood and violence. It's a frustrating game, but not one you need to protect your children from. The violence is all low-pixel and cartoony, safe for most players. There is some satanic imagery in the game, so if you're sensitive about that, you may want to take a look at some screenshots before letting your kids try it.