War Without End, But In A Good Way 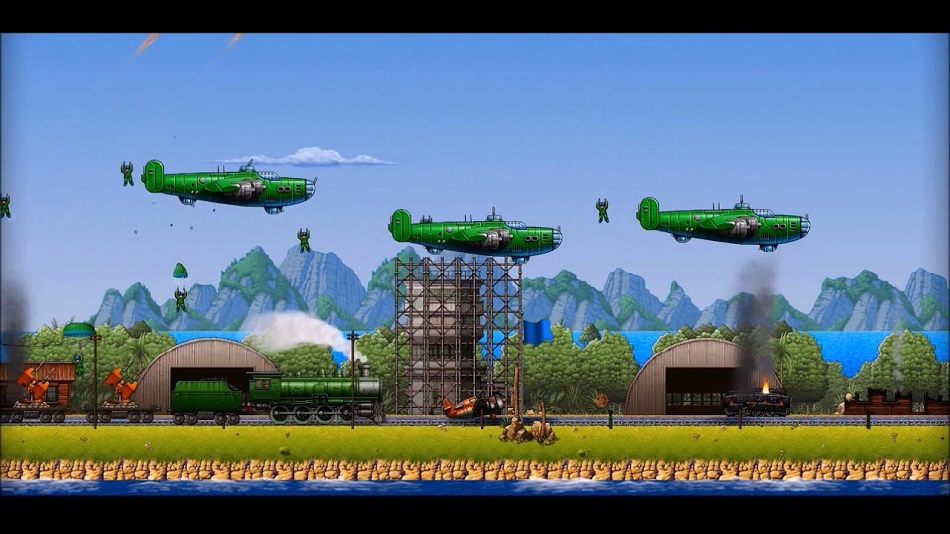 HIGH Pulling off a perfect carrier landing under heavy fire.

LOW Escort missions? In an arcade game? Are you crazy?

If nothing else, roguelike game design elements have made quarter-munching gameplay design relevant again.

Back in the days of arcades, games were built around cruel difficulty spikes – ideally dropped just far enough into a run that players felt like they were getting the hang of things, and if they just put one additional quarter in, they’d surely get past the hump. And they would. Of course they’d slam into the next wall, and the cycle would continue.

Once players had games on home systems, they began to see just how contrived and unfair this design was, and their attention turned to richer experiences with difficulty curves designed around player enjoyment, rather than player exploitation.

Of course, the rise of roguelike elements iterated on the concept of starting from scratch, and after this, all of the old arcade types were back – the twin-stick shooters, the 2.5D brawlers, the horizontal bullet hells, and more. The difference was that instead of spending quarters to get past tough sections, players could now improve their chances by spending time. Every failed attempt would have the chance to unlock new modes, characters, and weapons, and all of this encourages players to improve their skills, while giving them perks to help them along. This formula has revitalized any number of genres, and there’s no better example of this than Rogue Aces.

A 2D arcade flight game that can trace its pedigree all the way back to 1984’s Sopwith, Rogue Aces puts players in charge of a WWII-style plane and has them attack a series of islands, wiping them clean of enemy troops and buildings, and then seizing them to make way for an invading force. It’s pure combat and nothing but, with the player’s heavily-armed plane capable of strafing, bombing, and rocketing just about anything into oblivion.

Rogue Aces impresses most with its well-structured play. The goal of the campaign is to complete a hundred missions with just one life and three planes. Most players will not complete this on their first attempt. 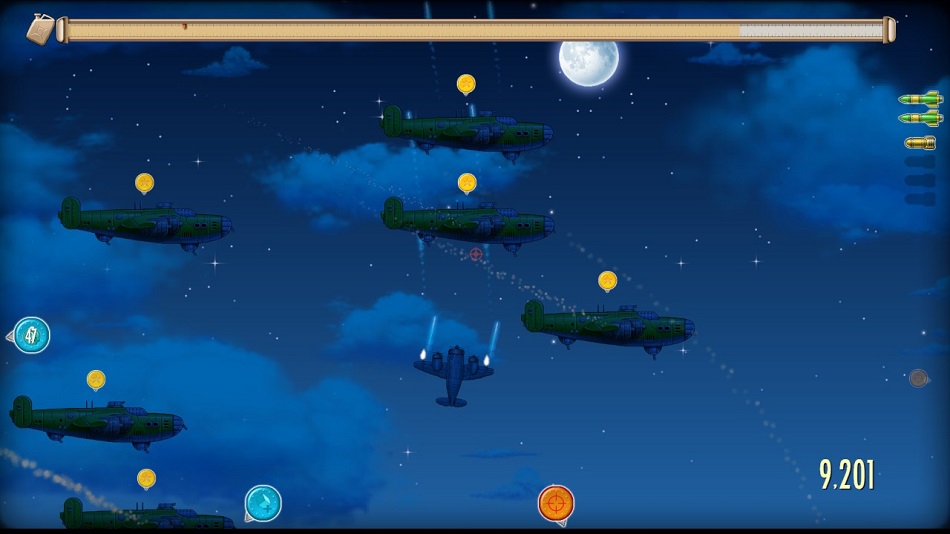 Sitting on the runway or aircraft carrier, the player is told to blow up a particular facility or destroy a certain number of enemy units. Once they’ve accomplished that, they can return to base for their next assignment. The interesting thing is that they’re not required to do so – while not an open-world experience, the player is free to keep flying as long as they can survive. It’s a subtle way of constantly encouraging players to push to the edge of their comfort level, and then exploring a little further than might otherwise seem safe.

Even if the player doesn’t make it back from one of these sorties (they ran out of planes, didn’t eject in time, or wound up captured by the enemy) every achievement will be tallied up as experience, and next time they start a game they’ll begin with a better-equipped plane.

Apart from the campaign there are plenty of modes available to unlock, each one offering a completely different type of challenge. Frontline is a strategy mode that has players charting a course through a series of islands on their way to the enemy headquarters. Bomber Defense has them taking control of multiple cannons, blasting away at bogeys that swarm in from the edge of the screen. The standout, though, is Rogue Ace, which feels like both a reward and the ultimate challenge — the player is given a fully-upgraded plane and a single life in which to do as much damage as-possible to an impossibly hardened island.

While the curve of the starting clunky, slow plane gradually transforming into a bird of prey is excellent, Rogue Aces does falter a few times in its design.

As is so often the case, the camera is just a little too close to the action. Because the islands are randomly generated, imposing cliffs can appear from out of nowhere at almost any moment, and at full speed, players will only have a split second to properly react or find themselves with an immediate game over. Moving the camera back about 20% or offering a mini-map would have gone a long way to solving this problem.

The only other issue is landing, which I found to be the most difficult part of the game by far. Players have to manage approaching airstrips at just the right angle, altitude, and speed, or risk crashing for another immediate game over – it’s a strange dose of brutal realism in what is otherwise a pure arcade experience. The tutorial doesn’t bother to teach even the basics of landing, and while it’s possible to simply tap a button to auto-land every time, doing so comes at a steep point penalty.

Rogue Aces is a true accomplishment, a game that updates a formula from the very earliest days of home computing and makes it feel vital and engaging. While it may not be easy, it’s accessible to all levels of players, and goes to prove that there’s seemingly no classic genre of videogame that a few roguelike elements can’t improve. Rating: 7.5 out of 10

Disclosures: This game is developed by Infinite State Games and published by Curve Digital. It is currently available on PS4, Vita, and Switch. This copy of the game was obtained via publisher and reviewed on the PS4. Approximately 10 hours of play were devoted to the single-player mode, and the game was completed.  There are no multiplayer modes.

Parents: According to the ESRB, this game is rated E10+ and contains Fantasy Violence. Well, it’s not that fantastic. This is a game about WWII-styled planes and tanks blowing up, so the fact that there are people inside getting killed won’t be difficult to imagine. It’s actually rather explicit when players strafe enemy soldiers on the ground or shoot paratroopers out of the air. So not as harmless as the ESRB would have you believe.

Deaf & Hard of Hearing Gamers: I played most of the game with the sound off, and noticed no problems or missed cues. It’s fully accessible. 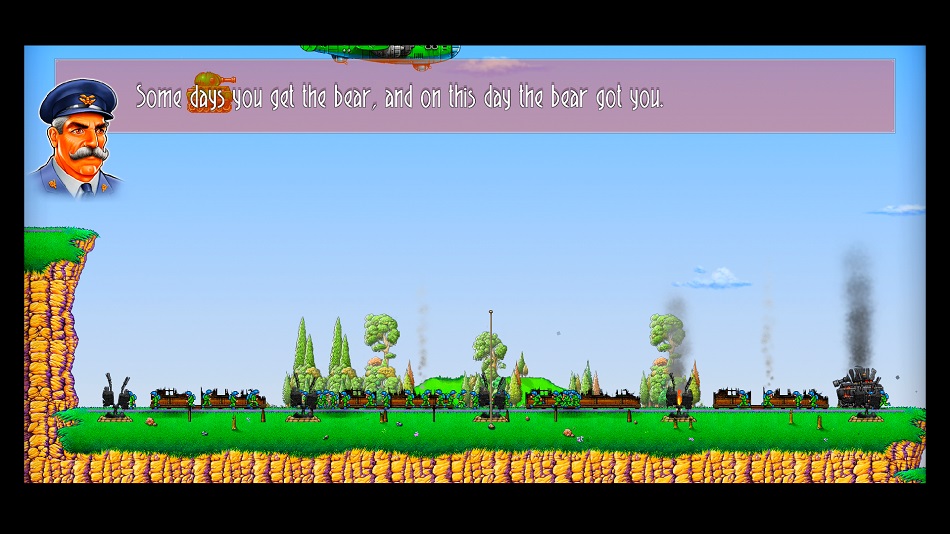 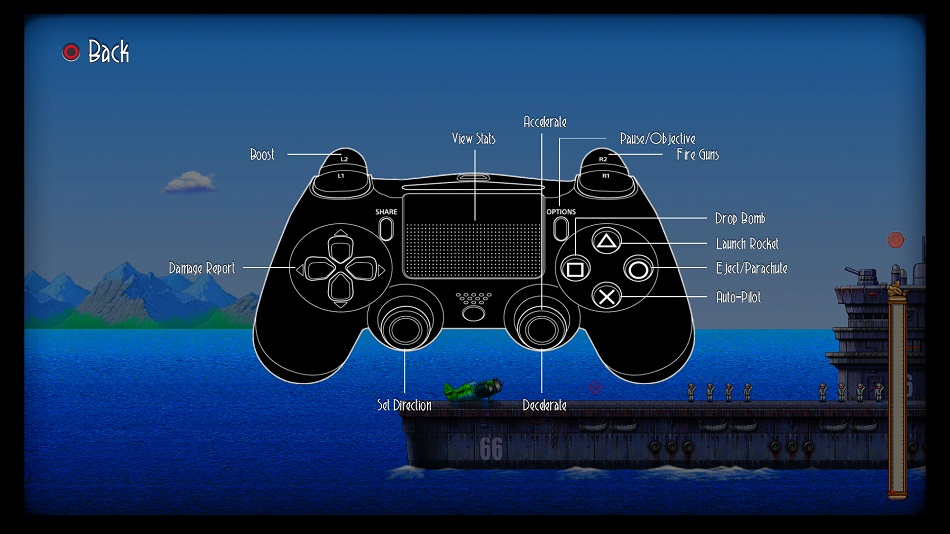