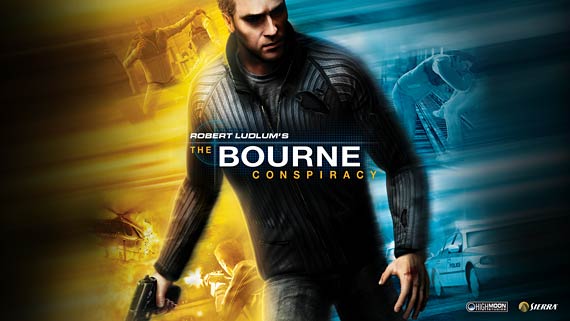 I can't believe this game was developed by High Moon Studios. A few years back I reviewed the game Darkwatch, and I was extremely hard on its flaws. So hard, in fact, that one of the developers was nice enough to write me a letter accusing me of being so unfair on the game that it bordered on unprofessional. I explained to the developer that I stood by my review, and that Darkwatch's main problem was that when it wasn't being inexcusably mediocre, it was incredibly stupid. After our correspondence ended, I proceeded to not think about High Moon Studios until I saw their logo show up at the beginning of The Bourne Conspiracy.

Two levels in I stopped the game, went back to the Xbox Dashboard and reloaded to make sure I'd seen what I thought I saw. Yes, it was made by the same people who made Darkwatch. What did I learn? That while a development studio's previous work can usually be a good predictor of their performance in the future, just because some developers turned out a terrible game doesn't mean that they won't turn around and make a fantastic one the next time out.

A third person shooting/fighting hybrid, The Bourne Conspiracy attempts to capture the raw, intense action of the film The Bourne Identity, edit out any vestigial story segments, and then stretch it all out to around eight hours in length. Well, I assume that's what they were attempting to do, because it's exactly what they accomplished. TBC offers hours and hours of unparalleled combat, with none of the film's deep characterization or careful plotting. The only thing that puzzled me about the game was the title. Despite the 'Conspiracy' moniker, which suggests either an original title or overall look at the series, the game follows the first movie's plot pretty closely, changed wherever necessary to allow for additional fistfights, with three extra 'flashback' action sequences included to pad out the running time.

The game seems to exist for a single reason (beyond leveraging the Bourne IP for additional cross-platform revenue opportunities, of course), and that's the recreate the films' celebrated hand-to-hand combat scenes with as much believable physicality as possible. Not only does the game succeed in this respect, but it actually manages to improve on the films, offering far more impressive and satisfying hand to hand combat than the movies offered. Partially this achievement is due to the added identification factor of being involved in the fight, but mostly it's because the necessity of being able to control the character forces the camera to follow the action closely and clearly, allowing the player to actually see what's going on in the fights. This is a sharp contrast to the films' technique, which involved shaking the camera so vigorously that the viewer was only able to tell for sure which of the combatants was Matt Damon after the other one had been beaten to death. 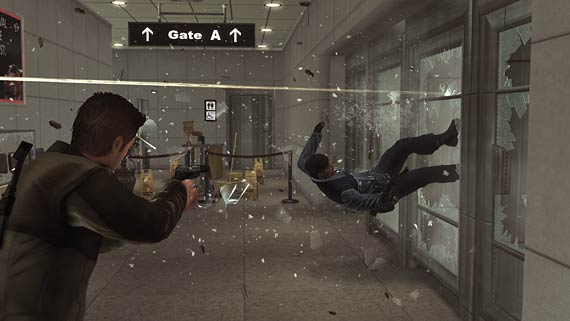 TBC could be used as a teaching tool for anyone wanting to learn how to make a brawling game both realistic and relevant in modern videogames. Despite the fact that players have just two attack buttons and eight basic combos, the fights manage to be interesting and fresh for the entire length of the game. How? Through brilliant use of the environment. In addition to punching and kicking, the player can also use 'takedowns', quick flurries of violence that incapacitate normal enemies and severely damage bosses. These takedowns are context-dependent, so Bourne will automatically smash his opponent against the nearest piece of convenient scenery. This ensures that even if the takedowns themselves are being drawn from a fairly limited set of animations, they never get old, since they always seem to grow organically out of the fight. That's especially true in the boss fights, since each one takes place in a veritable playground of sharp or easily broken objects. Even the big fight from Bourne Identity makes an appearance, including the famously wince-inducing pen stabbing.

The shooting system is almost as well-designed, featuring a well-implemented cover system, and the ability to do 'shooting takedowns', which allows players uncomfortable with aiming to use a minigame to kill distant foes. The source material's driving sequence isn't as well-represented, however, as the game devotes one of its levels entirely to a sequence that makes driving at high-speeds against traffic through the narrow alleys of Paris seem almost dull. The floaty car handling and physics I can handle, and have almost come to expect from third-person action games that try to do driving sequences. What's less forgivable is just how long the sequence goes on. Speaking as a fan of scripted action driving sequences, I can say without qualification that there's a time limit to them. After a certain length, all the sharp turns start to look the same, and jamming on the handbrake just starts to get dull. At around ten minutes, the sequence goes on about three times longer than the breaking point. Luckily, there's just a single driving sequence in the game, so it doesn't detract much from the overall experience.

While the action did fantastically well, the film's story didn't survive the transfer into videogame unscathed. Or un-brutalized, actually. That is to say, the game seems to miss the point of the film entirely, in that far from being an off-the-books assassin before he lost his memory, Bourne seems to have been some kind of an amazing action hero. 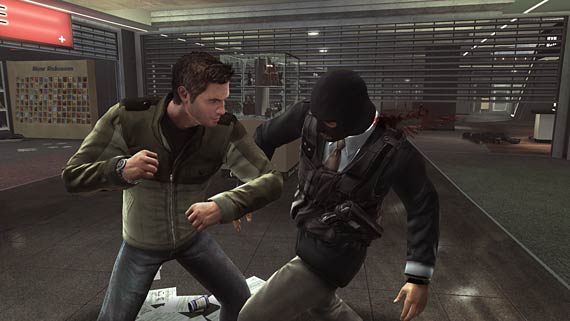 In addition to featuring the Bourne Identity's plot almost in its entirety, the game offers three 'flashback' missions, which show a pre-amnesia Bourne off on his early adventures. While the Bourne of the films was an off-the-books 'ghost' who executed people who threatened the CIA's (or just his handlers') interests, the game's version of the character was more of a kung-fu gunfighter, the man to send when upwards of fifty terrorists needed to be beaten and shot to death by a single hardcore individual. I'm sure the changes to the story were required to make everything more palatable to general audiences (after all, who would want to play a game as the bad guy?) but it really hurts the story. The villains' motivation is based on the idea that they can't risk Bourne revealing all the secrets he's learned as a government murderer. What exactly are they afraid he'll talk about in the game? All the times he saved the world from nuclear proliferation through voluminous ass-kicking?

Of course, since this game represents a move to an entirely different medium, a few story changes are going to be necessary, but it's sad to see all meaning stripped from the proceedings. It's not as if the game can claim to be its own version of the Bourne story, separate and unrelated to the film. While the film made huge departures from the novel (keeping only the basic premise and a couple of scenes), the game clearly attempts to recreate the film at every opportunity, going so far as to use the film's dialogue, locations, fight choreography, and music. It's only in the game's failure to obtain likeness rights to anyone in the cast (except Franke Potente) that keeps it from flat out being the Bourne Identity game. This makes the changes in plot all the more noticeable, and the game suffers because of it, removing an interesting tale about just how much the people tasked with protecting us can be trusted with the power it takes to do so, and replacing it with an action-game boilerplate that would feel at home in a new Syphon Filter title.

Even as I was enjoying the game's top-notch action, I couldn't help but be disappointed that the developers weren't doing more with the franchise's dramatic possibilities. The huge gap between the game's storytelling and the film's is no more apparent than in the final fate of The Professor, one of the assassins dispatched to kill Bourne. In the film, after a tense game of cat-and-mouse through the French countryside, Bourne manages to shoot The Professor, and then, in a quiet scene set in a cold field, the men talk, and reach a kind of understanding as one of them bleeds to death in the snow. In the game, the two men have a fistfight in a burning barn. That's kind of the game in a nutshell. Really fantastic, satisfying, over-the-top action, but nothing else to speak of. I suppose that's enough of an accomplishment to warrant me recommending the game, but comparing the game's story to the film's, I can't help but think how nice it would be if we were living in a world where it wasn't.