According to ESRB, this game contains

: Blood, Mild Language, Use of Alcohol and Tobacco, Violence 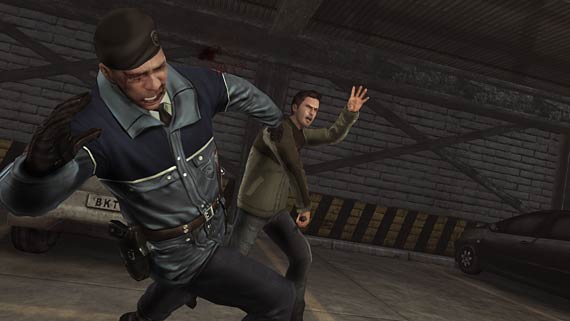 Parents should be okay with their teens playing the game. Other than the removal of the morally complex shading, there's literally nothing more objectionable in the game than it was in the film. If you're fine with them seeing the level of violence, drinking, and smoking in the movie, then the game's cool too.

Fans of the films will probably like to check this one out, since it does a great job of recreating the action they loved in a playable form. Of course, if they liked the films for their complex and morally gray view of the world of espionage, the game won't be too appealing, as all of that has been removed.

XBL Achievement hogs will be impressed with Bourne, as it has the best achievement tracking system I've ever seen. A section of the menu is devoted to listing all of the game's achievements, the criteria for unlocking them, and the player's progress towards doing so. It should serve as an example to everyone making an Xbox 360 game.

Deaf and Hard of Hearing gamers will have a little trouble. In addition to the standard shooting game issue of not being clued in to offscreen gunfire until the bullets start hitting, a sound effect plays in fistfights just before quick-timer events pop up, which means you're going to have to be a little quicker on the trigger than the average gamer. On the upside, dialogue is subtitled, so at least you won't be missing out on the plot.