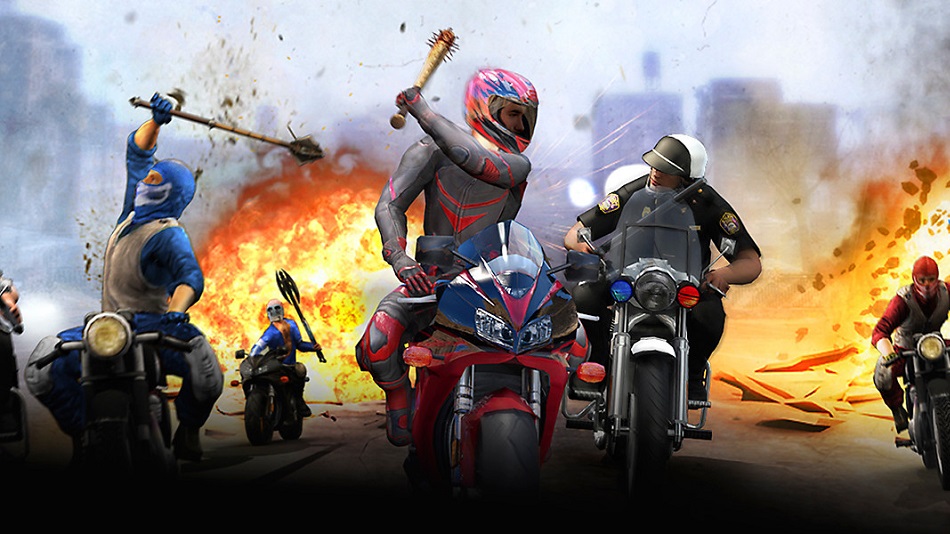 HIGH Beheading two bikers at once, then watching their bodies fly into a ravine.

WTF The bonus map is a Nintendo lawsuit waiting to happen.

Road Redemption wields nostalgia like a weapon against its player, offering them an imagined past wrapped up in a mostly-modern package. The developers’ single goal seems to be recreating the feeling of playing 1991’s Road Rash, back when that was a game actually worth playing. Despite stumbling on many, many fronts, they’ve accomplished that goal.

Using a roguelite structure that’s fairly unusual in the racing genre, Road Redemption put players in the role of a member of the Jackal motorcycle club, out to kill an assassin with a $15 million dollar bounty on his head. The journey takes the player through three different areas full of increasingly-armored riders who are all just as interested in the prize, and all capable of ending a run with just a few swipes of their baseball bats.

While it’s technically a racing game – two of the five modes are about tearing down one of fifteen different tracks – the racing mechanics are tuned in service of the motorcycle-based combat. Other than one unlockable super-bike, all of Redemption‘s rides have the same basic speed and acceleration stats, which reinforces the core gameplay loop: Nitro boost up to a clump of enemies, kill to earn more nitro, and repeat until the finish line is crossed. This works incredibly well in the multiplayer mode as well, where up to four players can find themselves caught in a huddle, parrying and slashing at each other until heads go flying.

The gameplay is simple and repetitive, but the visceral thrill makes it endlessly replayable. Players can attack left or right with melee weapons, grapple or kick to push enemies off the road, shoot bikers ahead and drop bombs to kill those behind. It’s a surprisingly deep system with upgradeable equipment, various kinds of enemy armor that must be countered with specific weapons, and plenty of opportunity to use the environment — at a hundred miles an hour, any stationary object becomes a lethal weapon. 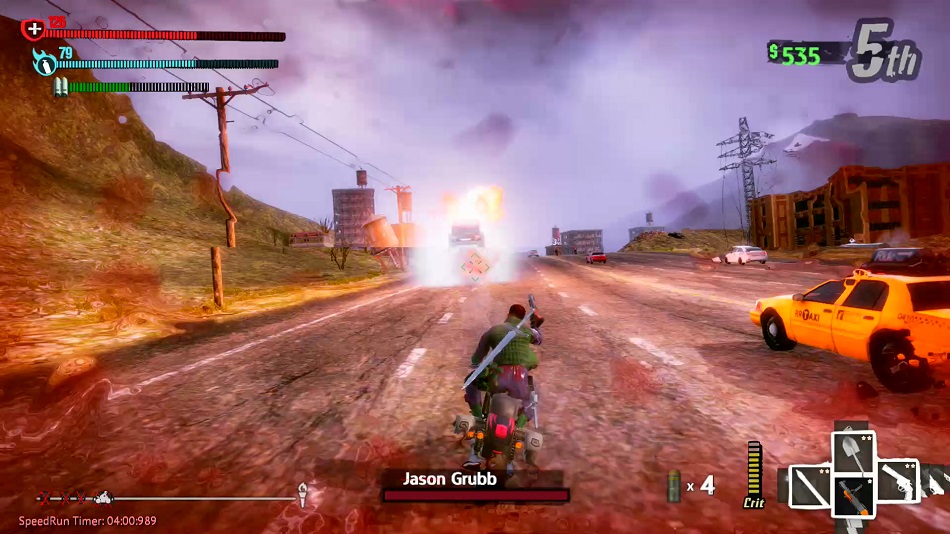 Campaign runs are randomized to a certain extent. Players always race on the same maps in the same zones, but the order may be shuffled a little, and the mode is always a surprise. Not that there’s a huge practical difference between taking out enemies and beating them in a race – dead guys finish last, after all. In classic roguelite fashion, playing earns experience that can be used to skip levels and give the player a stronger starting build.

There are a wide variety of unlockable characters, each one different enough that they’ll force the player to change their approach in meaningful, interesting ways. The headless horseman, for example, can only heal and earn nitro by decapitating enemies, but actually using that nitro hurts him, which forces the player into reckless aggression. Santa, on the other hand, literally cannot hurt other riders – he can bonk them with a candy cane to earn nitro, but they won’t be harmed. Players will have to learn perfect defense if they want to succeed with him.

Road Redemption would be a nearly perfect expression of its goals if it weren’t for a few glaring flaws. The first is how excessively the AI players cheat at racing. A good portion of the game is spent driving into oncoming traffic, and while that’s understandably hazardous for the player, AI riders are immune to head-on impacts. Unless the player is actively engaged in combat with them, they have the magical ability to skirt out of the way of any crash instantaneously. I can understand pulling some tricks to keep the AI in competition, but it’s hard to express how dispiriting it is to watch while a biker firing his machinegun backwards teleports out of the way just before a car would have disassembled him on a molecular level.

Even more frustrating are Redemption‘s near-constant crashes — the software kind, not the motorcycle kind. I averaged about one crash-to-PS4 menu for every three runs I made. This frustration was exacerbated by the complete lack of an auto-save system. Technically it’s possible to ‘continue’ a crashed campaign at the level where the blue screen came up, but the game doesn’t remember what perks players had unlocked or even what rider they were using, so basically they’re just starting the campaign over a few levels in. The ‘campaign+’ mode which features fully randomized levels, doesn’t even offer that – a crash there is a complete write-off.

When it’s not crashing, Road Redemption offers perfect bite-sized pieces of vehicular mayhem. It’s loud and bloody and raw, and the dated graphics only increase the grit and messiness. With a few fixes, this could be an all-time classic of the genre, rather than the deeply flawed romp that it is. Rating: 6.5 out of 10

Disclosures: This game is developed by EQ Games and Pixel Dash Studios and published by Tripwire Interactive. It is currently available on PS4 and PC. Two copies of this game were reviewed, a PC version obtained by paid download, and a PS4 version sent by the publisher. Approximately 60 hours of play were devoted to the single-player mode, and the game was completed innumerable times. 3 hours of play were spent in multiplayer modes.

Parents: According to the ESRB, this game is rated M and contains Violence, Blood and Gore, Drug References, and Strong Language. Just looking at any given screenshot will yet you know this is wholly inappropriate for children or even younger teens. Beyond that, however, there’s plenty of swearing, and between levels, players can heal injuries by abusing prescription opiods!

Deaf & Hard of Hearing Gamers: I played almost all of the game on mute, and never encountered any problems at all. The limited dialogue in the game is all subtitled. It’s fully accessible. 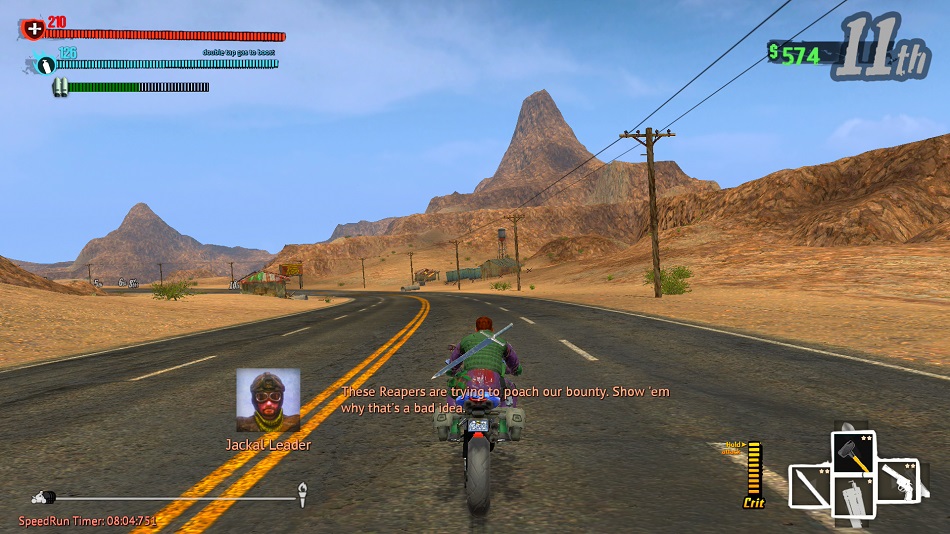 Remappable Controls: No, this game’s controls are not remappable. There is no control diagram. Thumbsticks are used to move and aim the camera, with face buttons for physical attacks, and triggers used for controlling speed and ranged attacks.

Just started playing this on the Xbox One, and I am happy to say that the crashes, so far, are not present in this iteration. Everything else, from the bite-sized delight, to the annoying death-defying the AI does is still in place.