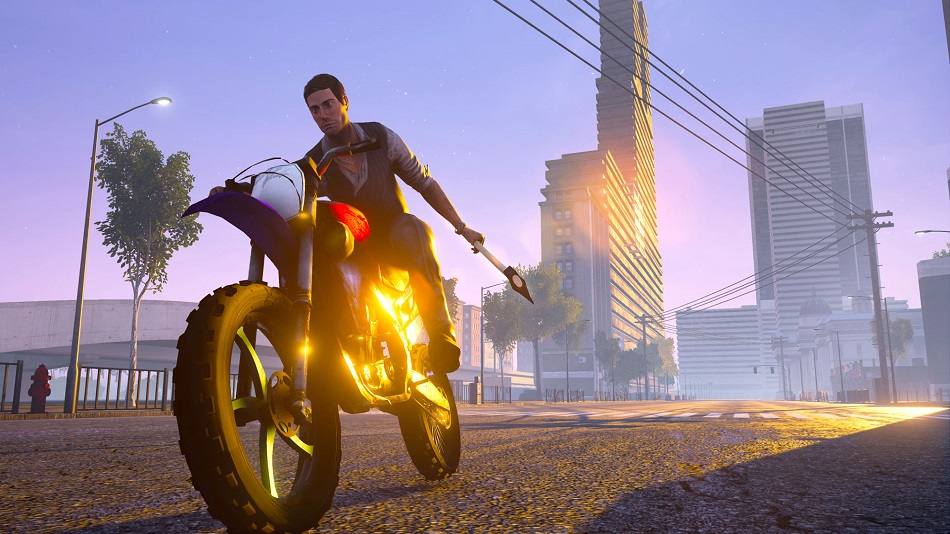 WTF That’s quite a Schwarzenegger impression one of the mission-givers is doing!

I suspect – and there’s ample evidence supporting my theory – that this is not a finished product.

Despite being shipped to stores and made available as as digital download on all major platforms, it’s clearly not the full project that the developers intended to make. I’m not simply addressing bugs here – of which there are many – but other, rather obvious impressions. To my eye, large sections of content have been left unfinished.

Road Rage tells the story of Ashen, a major city left to founder in the aftermath of an economic collapse. The citizens have been separated by economic class, with each area of town walled off by huge concrete dividers. For reasons that are never adequately explained, everything is now run by ruthless motorcycle gangs who race one another when they’re not murdering people with clubs and chainsaws. The player takes on the role of a biker who wants race their way to a better life, or possibly use their racing skills to defeat the Illuminati. It’s never entirely clear.

Right away, Road Rage gets into trouble with its very premise. There’s an open world city to explore, but there’s no content other than the missions. No sidequests, no activities, no challenges, just a single collectible to find in each of the seven regions. What’s the point of having an open world if there’s no reason to explore it? Once the player has completed each of the story missions for a region, they can unlock replayable missions set in the same area, but because they’re essentially rehashes of the story missions, there’s no real reason for a player to get into them unless they’re desperate to grind cash to improve their motorcycles and buy new weapons. Neither of which is particularly necessary.

This brings me to the central flaw that dwarfs all of the game’s other issues – it’s a motorcycle game about racing in a dense urban area.

Motorcycles aren’t great at turning, but all of the races require lots of turns. In order to survive, players have to focus on keeping their speed as low as possible so that they don’t slam into walls every time they take a corner. As such, the city design essentially renders bike upgrading moot. Yes, the player can spend thousands of dollars upgrading their bike’s various attributes, beefing up its acceleration and top speed, but all that will accomplish is to ensure that they slam into walls along with the AI bikers. 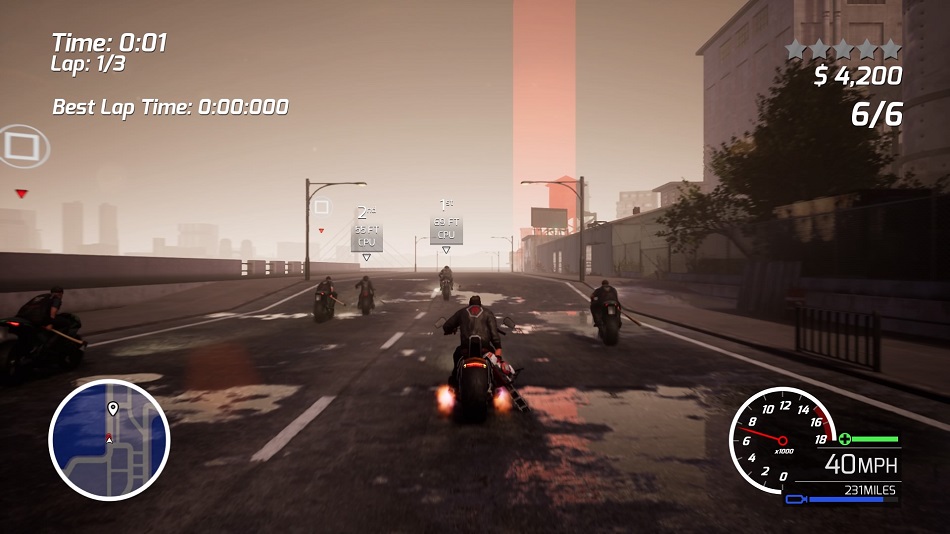 Hilariously, players don’t need to be particularly skilled to win races in Road Rage – the AI players focus on speed above all else, and will crash any time they get more than a hundred meters of open road before a turn. It’s like a tortoise and hare situation, if the hare’s problem was that he sprinted so quickly that he kept running headfirst into trees.

The combat system, which should be one of Road Rage‘s main attractions, is obviously unfinished, and this is made clear by the apparently last-minute decision to abandon a ‘health point’ system.

On-screen there’s a health bar letting players know how much health their rider has. Motorcycles have upgrades that can increase this number, but it means nothing. Hitting any enemy with any weapon a single time knocks them off their bike, which counts as a takedown. Likewise, a single hit form an AI player’s weapon also takes the player down. Bikers respawn just seconds later, of course, but there’s absolutely no depth to the system, and weapon choice is a strictly cosmetic question, rather than a strategic one.

The combat itself is fundamentally broken as well. When a biker is taken down, one of three things happens – their bike keeps going straight, it falls over away from the player, or it falls towards the player. If it falls towards the player, it immediately causes a crash. There’s almost no way to prevent this, meaning that every time the player smacks an opponent, there’s a roughly one in three chance they’ll wipe out as well. Those aren’t fantastic odds.

Mission design is largely unfinished, easily sussed by the way mission briefings have little (or nothing) to do with the actions the player is asked to perform within those missions. For example, I was tasked with making seven deliveries in five minutes, planting bombs on trucks, or retrieving files, but when the missions started, they were all be simple point-to-point races. The story mode also suggests robust gameplay features that the developers never managed to implement, and it’s kind of embarrassing to watch the failure in real time.

Even when missions are similar to the description, there’s always something missing. Briefings for Assassination missions will tell me to take down three to seven members of an evil gang, but every time the mission starts, I’ll be asked to kill just two people in two and a half minutes. The last mission of the game is supposedly about the main character taking down the head of an evil conspiracy responsible for all social ills, but the objective is to drive from one end of the map to the other in three minutes. I don’t have the slightest idea what one thing has to do with the other.

Road Rage isn’t half the game that it wants to be, and it’s hard to understand how it was released in its current state. There are plenty of places where I was able to drive through level geometry and out into a blank void, causing a crash. Likewise, I frequently found myself clipping off of courses into walled-off areas, and because the developers neglected to include a method for resetting my bike onto the track, I’d be forced to restart. Racing superbikes in a crowded city with narrow streets is a terrible concept to build a game around, and Road Rage marries that terrible concept with awful execution to create something that’s far less than the sum of its questionable parts. Rating: 3.5 out of 10

Disclosures: This game is developed by Team 6 and published by Maximum Games. It is currently available on PC, XBO, and PS4. This copy of the game was obtained via publisher and reviewed on the PS4. Approximately  8 hours of play were devoted  to the single-player mode, and the game was completed.  1 hour of play was spent in multiplayer modes.

Parents: According to the ESRB, this game is rated M and contains Strong Language, Suggestive Themes, and Violence .  In the game’s text-based mission briefings, profanity is censored, but the voice actors say the profanity. This puzzles me, because there’s plenty of swearing in the game, but it’s as if someone was squeamish about typing it out. While the violence – people being hit with chainsaws while riding motorcycles – is plentiful, it’s all bloodless and free from consequence, which is kind of upsetting, actually.

Deaf & Hard of Hearing Gamers: I played the vast majority of the game on mute and noticed no problems whatsoever. All story sections are subtitled or presented as text. It’s fully accessible.