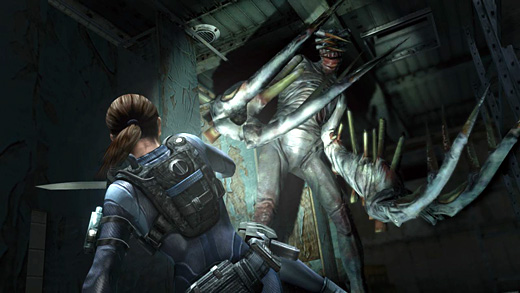 LOW Endlessly respawning goons that back up one of the bosses.

WTF Why would I ever play a higher-level mission if I can't use the weapons I win there?

In making the leap from the 3DS to consoles, Resident Evil: Revelations

had to clear one big hurdle:

Does it offer enough content to justify a promotion to the big screen?

While there are plenty of worthwhile handheld games, it's rare to see one with the scope necessary to deserve a full-priced console release. In my opinion, the improved graphics are certainly up to snuff, but everything else falls well short of the mark.

Set prior to the events of Resident Evil 5, Revelations puts Jill Valentine and a host of other playable characters aboard an infected cruise ship, and tasks them with uncovering the truth behind a terrible biohazard attack a year earlier.

Right off the bat that's two strikes against the game—historically, Resident Evil (RE) games set on cruise ships have been disasters, and the prequel framework ensures that the plot can't be important to the series's overall story since none of the new characters, locations, and viruses in Revelations were mentioned in any other installments. Add to that the fact that the story is a jumbled mess of twists, reversals and hidden identities, and that's three strikes before gameplay mechanics are taken into account.

"Old-school" is probably the kindest way to describe Revelations's level and gameplay design. While the controls mostly hew to Resident Evil 4's layout, nearly all of the game's areas are so cramped that Jill's new abilities to sidestep and move while firing are almost never useful. After playing Resident Evil 6 (RE6) and its dynamic mix of free movement, fist-fighting and gunplay, going back to the classic formula of "run to one end of the room, do a 180, shoot, repeat" is a disappointment.

The lack of a "sprint" button is also puzzling—Jill can only walk slowly or jog at a decent pace. There are plenty of free buttons on the controller—why not let the player put a little space between themselves and the various creatures desperate to gut them with gristle-based buzzsaws?

Also, the less said about the "dodge" feature, the better. Supposedly the player can tap a button to slide away from any physical attack, but good luck trying to figure out when to do the tapping. The game doesn't offer an on-screen prompt, and trying to suss out where the "dodge frames" are can get frustrating fast when a few attacks are one-hit-kills. Why not put a dodge prompt on screen? For that matter, why not let players dodge whenever they feel like it? 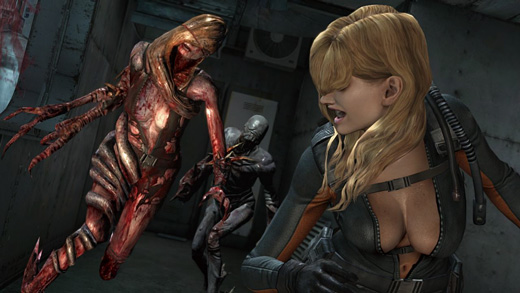 Another puzzling addition to the game's mechanics is a "scanner" that can be turned on at any time to examine the surroundings a little more closely—it's not unlike ZombiU's gamepad, only with none of the functionality.

Other than a couple of plot-based interactions, the scanner serves just two functions—the first is that when the player scans enough enemies with it, they're rewarded with a green healing herb. I have no idea why. The second is infuriating: in previous RE games, ammo would be left scattered around levels to be picked up as needed. Here, it's still scattered around levels, only now it's invisible! The player is forced to put the game on hold to scan each room, and then must "tag" items—only after doing this are the bullets collectible. I have no idea how this mechanic felt on a handheld system, but here it feels like a giant waste of time.

Despite all these troubles, Revelations has a couple of saving graces, like the enemy design. While nowhere near as impressive as the J'Avo, this game's "Oozes" are captivating in their loathesomeness. These fleshy abominations manage to sell the idea of humans crudely twisted into undersea-themed monsters. There's also enough enemy variety to keep surprising players for the entire six-hour running time, and the boss fights do a great job of working with the control scheme's limitations. Things are challenging, but fair—none of the monsters sprint around the map, taking advantage of Jill's limited movement.

The quality of foes also props up the game's other great feature, the co-op "Raid" mode. In this mode, the storyline is broken up into sixteen bite-sized pieces, allowing single players or teams of two to shoot their way through various locales without worrying about cut-scenes.

Completing Raid levels earns the player money, guns, and experience points, which adds a little bit of depth to the mode… but it also creates a problem. Where the "Mercenaries" modes of other RE titles simply hand the player some guns and let them go wild, the developers of Revelations decided to add a "loot" mechanic, forcing players to redo the same brief levels over and over again, hoping for decent weapon drops. Worse, these weapons will be useless just five levels later, due to the incredibly steep strength curve of the enemies. Some of the entertainment value of dropping in and out with a friend is sucked away when the player has to worry if their guns will even hurt higher-level foes.

After RE6, the style of gameplay in Resident Evil: Revelations

feels incredibly outdated. In fairness it's not entirely the game's fault since it was originally released on the 3DS before RE6, but this version is coming out more than half a year afterwards, and suffers by the comparison. With stiff controls, an inconsequential plot, and utterly tacked-on mechanics that add nothing but confusion, Revelations is a perfect example of what RE looks like at its worst. The developers had a full year to get this game ready for consoles and bring it up to the level of current RE titles. Instead of doing that, they shifted the graphics from 3D to HD. What a waste. Rating: 5.5 out of 10.


Disclosures: This game was obtained via publisher and reviewed on the Xbox 360. Approximately 10 hours of play was devoted to single-player modes (completed one time) and three hours of play in multiplayer modes.

Parents: According to the ESRB, this game contains blood and gore, intense violence, language. You shouldn't let your children play this game. It's just wall-to-wall violence and incredibly salacious costumes that somehow managed to slip by the ESRB without comment. In addition to the brutal violence the player witnesses firsthand, the story is also incredibly bleak, filled with terrorism, mass-murder, and some genuinely creepy text pieces. So please, restrict this one to older teens and up.

Deaf & Hard of Hearing: There are going to be problems. Big problems. A lot of the enemies have audio cues that warn you of their arrival, and the punishment for not knowing they're on their way is severe damage. There's even an occasionally-invisible monster whose footsteps you have to listen for. Dialogue is subtitled, so you won't miss any story, but that doesn't make up for the kind of hassle the beasts are going to be giving you, since there's no accompanying visual cues letting you know which direction they're coming from.

I agree with most of your review, which is pretty amazing for gamecritics, but I have to mention the only actual problem with the game: No zombies. The game is a definite step back in the right direction for the franchise, but they need to shed the endless T-viruses and just stick with the original T and G, and then make a game based on that. Raid mode is basically Diablo 3, except it’s fun. There really is no downside to this game, sure there are some campy and bad characters, some frustrating elements in the game and one endless… Read more »