Welcome to the World of Shooting Gallery Horror 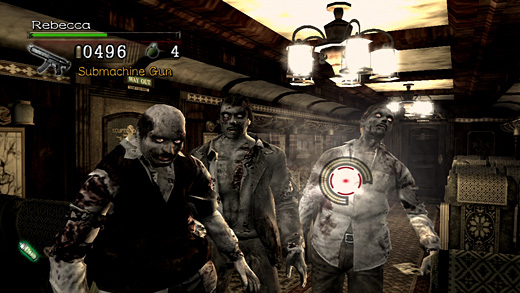 WTF It is impossible to decapitate a zombie with a shotgun. Make of that what you will.

I don't own a PlayStation Move controller. It's probably best to get that out of the way right now, seeing as this is PlayStation 3 (PS3) port of a Wii game, which carries with it the implication that PlayStation's port of the Wii's controllers would be the optimal way of playing it. I'm not alone in passing over the PS Move, however, and Capcom isn't marketing these titles solely to Move owners, so I think it's worth posing the question: How viable an option is it, really, for someone to play the Resident Evil: Chronicles HD Collection with a standard PS3 controller?

The collection is made up of two Wii titles: Umbrella Chronicles (built out of repurposed assets from the remake of the original Resident Evil, Resident Evil 0, and Outbreak File 1) and Darkside Chronicles, which rebuilt the worlds of Resident Evil 2 and Code Veronica while also offering some backstory to Resident Evil 4's characters.

The graphics have made the transition to PS3 incredibly well. While they may not be at a detail players expect from modern PS3 titles, to my eye they definitely appeared crisper and more attractive than when I played the Wii versions on the same large widescreen television. The only drawback to the upgrade in resolution is that it really throws the low-polygon count of the Outbreak levels into sharp relief. These were always the worst-looking areas in the games—understandable, as they started life as real-time 3D environments from a PS2 game, and the amount of work it would have taken to modernize these levels would have doubtless moved this title well beyond the resources of a team working on a simple port.

The gameplay content of the titles has been left unchanged, meaning that Umbrella Chronicles is still a considerably worse game than Darkside Chronicles. All of its flaws—spastic camera movement, weirdly difficult headshots, partially tying weapon upgrades to the player's ability to find secret files hidden inside furniture—have been preserved, making it quite a mixed bag. How they left in the "instant death if failed" QTEs is baffling to me—those are bad at the best of times. Imagine asking two different players to immediately press different buttons simultaneously to avoid being kicked back to the last checkpoint—that's just sadistic.

There are definitely thrills to be found in pouring lead into the giant spiders and hunters that leap around the Spencer Mansion, but it's no surprise that the only level that really works in the whole game is the Russian research facility—an area built specifically to have a rail shooter set inside of it. While players can enjoy the nostalgia of creeping through the abandoned lounge or dodging a Neptune, it's impossible to overlook the fact that these locations weren't ever intended to have this kind of a game take place in them. 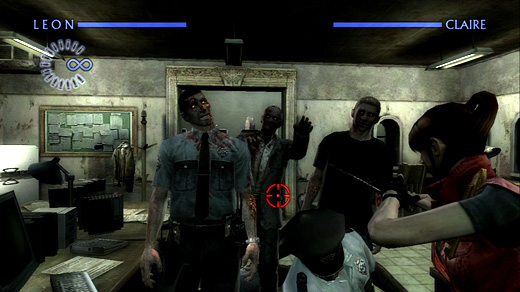 Darkside Chronicles maintains all of the improvements it had over Umbrella Chronicles, from making headshots far easier to pull off, to the way liberties have been taken with the geography of various locations to increase their playability. The Racoon City Police Department (RCPD) headquarters is less claustrophobic now, and there is considerably more breathing room inside the Umbrella research facility. None of the changes hurt the game's tone, or make it feel any less like a faithful recreation of some of Resident Evil's finest moments.

Darkside Chronicles' most impressive achievement is that it really does feel like playing the entire plot of Resident Evil 2 and Code Veronica with all the puzzles and item management stripped out, something that Umbrella Chronicles never managed. It's amazing to see how well Resident Evil 2 works as a focused action story with all the fat trimmed away.

Code Veronica, on the other hand, preserves that game's terribly-designed map, forcing players to do nearly as much backtracking as the original required. This has the side effect of creating levels far longer than one would expect to find in a rail shooter. I completed one section of Code Veronica in just under half an hour, and was told that I'd earned an "S" ranking. How long would a "D" performance have taken me?

As for the controller, it functioned both far worse and far better than I'd anticipated it would. The camera in both games seem to have two modes—whenever the character is moving it shakes violently, and whenever they're standing still it maintains a tight focus on one enemy, switching whenever the lead enemy is killed.

Compensating for the shaky camera movement was far easier with a Wii (and I assume Move) controller than it is with a thumbstick, which can make shooting bonus enemies while in transit for a high level rating nearly impossible. Whenever the characters stop moving and the camera locks in on one foe, this quirk actually notably lowers the game's difficulty for those using thumbsticks, even without the optional aim-assist, since it's quite easy to simply park their reticle near the middle of the screen, and let the camera essentially do the most of the aiming for them. Obviously this isn't the way the game was meant to be played, but from a difficulty standpoint, the standard controller actually proves nearly as capable as the Wii had been in making the game playable. The only consistent drawback is that most of the game's "hidden files" only appear when players are on the move, and they're far harder to grab with a thumbstick-controlled cursor.

The Resident Evil: Chronicles HD Collection proves a faithful translations of one of the more interesting footnotes in the Resident Evil canon, and at least the Darkside Chronicles half of it remains a solidly-realized rail shooter—and one that's accessible even for people without the Move controller. I can't help but feel that it's a missed opportunity for developers to go back and fix problems in the original product, though. It's not like Umbrella Chronicles is such an important piece of culture that it must stand inviolate, and I can't be the only player who would like it to be something short of impossible to blast a Crimson Head's skull to pieces. How I loathe those things. Rating: 7.0 out of 10.


Disclosures: This game was obtained via publisher and reviewed on the PS3. Approximately 14 hours of play was spread between single and multiplayer modes. The games were completed.

Parents: According to the ESRB, this game contains blood and gore, intense violence, language. While there's nothing salacious about the game, and the language isn't especially strong, the unending barrage of horror-themed violence makes these Resident Evil game a little more extreme than other entries in the franchise, and you should take that into consideration before letting your younger teens play it.

Deaf & Hard of Hearing: You won't have any trouble with this one—because the game is in charge of the camera you can be sure that it'll always be pointing towards the next enemy you need to shoot. Dialogue is used to highlight the importance of a few enemies' weak points, but it's all subtitled, so you won't miss a thing.