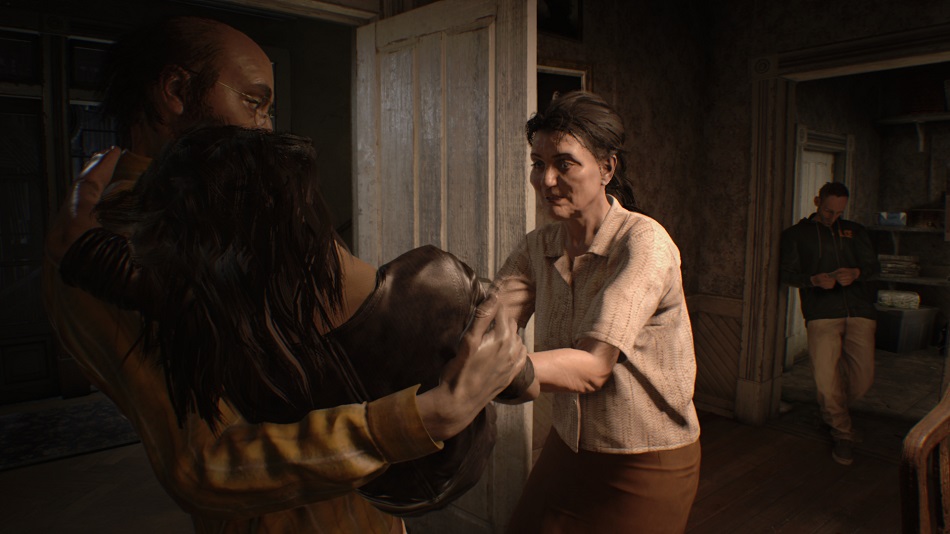 HIGH The final stage of 21.

WTF The playful hats all of the enemies wear in Jack’s 55th Birthday.

Resident Evil 7‘s Banned Footage: Vol. 2 was released earlier this year. The main game was one of the most successful PSVR titles, and Capcom hasn’t disappointed with the DLC. The first burst of extra content was generally excellent, expanding on the campaign in interesting ways. Would it be possible for the developers to continue their streak of quality with a second round of add-ons?

The answer is hell yes. 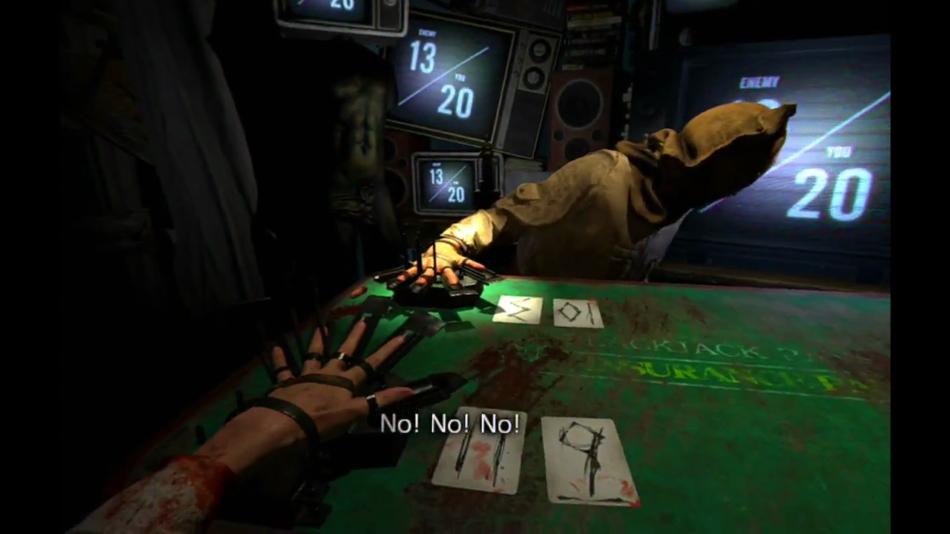 Clancy really can’t catch a break. When he’s not fighting waves of monsters, being forced to eat garbage, or taking part in a truly unsettling birthday celebration, Lucas makes him play a brutal game of chance!

21 has players strapped to a table and forced to compete against a man with a bag on his head. The game is blackjack, with two twists. The first, there’s only one of each card numbered from 1-11, which makes card counting a snap. The second, players are issued ‘trump cards’ that can be played at almost any time, letting them draw specific cards, mess with their opponent’s hand, or even increase the bet. Naturally, this brings me to what’s at stake – each player has one hand trapped in a mechanism equipped with five miniature guillotines – lose a hand, lose a finger. It’s a deeply upsetting image, especially in VR, where severed fingers come bouncing towards the player, spewing blood everywhere.

In addition to training players for the attached ‘survival’ mode, in which they’re forced to fight foe after foe with an expanded variety of trump cards, the main 21 game acts as an extremely upsetting short story, giving the player yet another glimpse of Lucas’ sadism, while putting them in the unenviable position of having to save their own life at the expense of another’s. It’s troubling stuff, and probably the most intense VR experience of the Banned Footage tapes.

Another short story, this one takes players back to the night when the horror began, when the Bakers transformed from an isolated, slightly weird family into the monsters that the player meets in the main game. Told from Zoe’s point of view, the game is a classic first-person horror experience, with the player forced to run, hide, peek around doorways, and try to keep from freaking out as they flee from their suddenly-hostile family armed only with their wits.

Daughters is a great experience – partially because it’s interesting to see the Baker house before corruption took hold and transformed it into a trash-strewn hellhole, but mostly because the environment is so perfectly designed for hide-and-seek gameplay. The game’s action is set around the main house, and its warren of interconnecting rooms full of furniture just tall enough to duck behind makes for a wonderful horror playground. I won’t get into the details of the story itself, but there are some light puzzle elements, and multiple endings, both of them offering a satisfying prequel to the events of the main game, and humanizing all but one of the game’s characters. 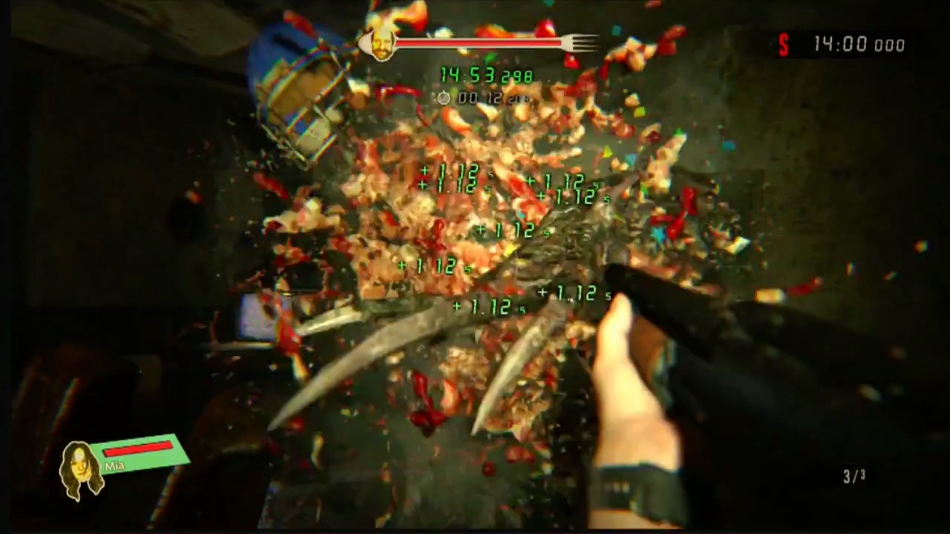 It’s another non-VR mode! Like Ethan Must Die, Jack’s 55th Birthday remixes some of the game’s locations into an entirely new experience – this one a scavenger hunt crossed with a combo-building shooting gallery. In each of three stages, Jack is seated at a table, demanding food – it’s up to the player to search said food out by sprinting from room to room, picking up dishes to bring back, and killing monsters to stop the game’s clock – since they’re be graded on how much time is left when they’ve managed to fill Jack up.

There’s only three levels, but each of them are exceedingly well laid-out, with food and bonus weapons tucked away in every corner of the stages – arranged in such a way as to create a ‘perfect line’ for players interested in optimizing their play and earning some of the game’ rewards. The rewards demonstrate just how much thought has gone into this bonus mode’s mechanics – perks can help players beat levels faster, but each one of them takes up space in their inventory, space that they’ll need to lug food back to Jack. Items increase strength but lower defense, or make guns deadlier but slow the player down. Deadly special weapons make the enemies a breeze to defeat, but players won’t earn as much of a time-stop bonus for killing them. The developers have crafted a bonus mode that’s incredibly malleable and able to be attempted any way the player wants.

Jack’s 55th Birthday is another standout mode – a faced-paced combo-based experience full of zany music and monsters wearing funny hats. It’s also extremely replayable – there are only three stages, but the game includes two versions of each, with meaningful changes in the harder return trips. Once again, the developers have demonstrated a remarkable ability to change what RE7 is and how it plays on a fundamental level. This is every bit as impressive as the rest of the game’s content, but it feels completely fresh and unique, just going to show what a stellar product Capcom has released.

Disclosures: This game is developed and published by Capcom. It is currently available on XBO, PS4, PSVR, and PC. This copy of the game was obtained via publisher and reviewed on PS4, both with PSVR and without. Approximately 5 hours of play were devoted to the single-player mode – 2 hours in PSVR, 3 hours standard – the content was completed.  There are no multiplayer modes.