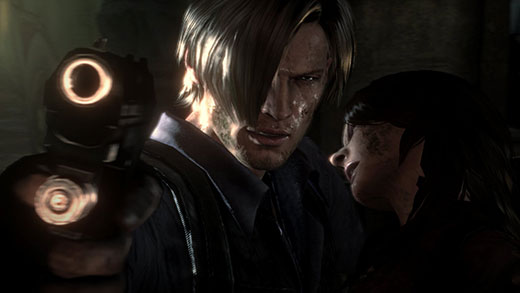 HIGH 'No Mercy' mode blazing away on a console at 60FPS.

LOW The campaigns still aren't listed in the correct order.

WTF I just found out only the last section of each chapter is required. Huge timesaver on the third time through.

It may be surprising, but this is the third time I've reviewed Resident Evil 6. I stand by each of my write-ups, but it's important to note that I've liked each one less than the last.

The original was as thrilling a horror/action game as has ever been produced, with its revolutionary-for-the-series gameplay hampered by poor documentation and fundamentally misunderstanding the role of regenerating health.

RE6 for the PC added the incredible 'No Mercy' mode. It turned the original's fairly bland Mercenaries mode into the best version of it that a RE has ever offered, yet it neglected to repair any of the original game's flaws.

Now Capcom has released Resident Evil 6 for a third time, and their negligence has reached inexcusable levels. How has this game still not been fixed? How many games get three bites at the apple without ever managing to sink their teeth in? The most galling aspect of Capcom's failure to correct their work is how small the changes would need to be. They don't even have to look hard for inspiration, since there are a thousand over-the-shoulder third-person shooters that get the basics correct.

For example, if the player is meant to constantly engage in intense combat, give them regenerating health or constant life pickups. RE6 offers neither. If the player needs to carry around an arsenal, let them have a separate ammo supply for each gun, rather than forcing them to fiddle with a tiny inventory screen when they're fighting hordes of mutants.

Earlier REs meant for players to carefully creep their way through crumbling research facilities, judiciously managing limited ammo and health. RE6 is a game meant to be consumed in huge bites, torn apart and wolfed down as the player charges across three continents, killing thousands of genetically-engineered footsoldiers. The developers' refusal to let it be what it is what keeps their work from reaching greatness. Resident Evil 6 is so close to bursting out of survival horror and becoming a top-tier action title, but the developers just won't shed the most limiting aspects of the previous installments.

Perhaps the most baffling issue with RE6HD is that despite the fact that it's a three-years-later rerelease of the PC version, it actually features less content than the copy I have on Steam.

That version offered four playable characters from Left 4 Dead as well as a few of that game's enemies as a way of spicing up the Mercenaries mini-game. They're not present in this addition, and no new characters have been added to make up for their absence. I would have expected to see Sheeva, Wesker, and maybe even Krauser show up as possible playable characters, but they're nowhere to be found.

Even stranger is the lack of retro costumes: Capcom offered special models based on RE2 for players who took part in competitions and events at residentevil.net. Considering that this game seems to use the exact same code as RE6PC, those costumes are presumably on the disk. But, if they are, there's no clear way to unlock them. The RE website (currently still running these competitions for previous gen/Steam players) has no idea that RE6 is available for PS4 or XB1.

Focusing on what it still offers, RE6's gameplay is as smooth and satisfying as ever, with point-perfect shooting and strategic hand-to-hand options blending perfectly to create great combat flow. The multiplayer modes (previously purchased separately, but included now) are also great, offering a wide array of ways to play, from siege and co-op modes, to the ever-popular ‘agent hunt' where players take control of enemies in other people's games, trying their best to stymie their progress.

In a nice addition, Capcom has included a 'suggested mode' where the game suggests a particular multiplayer mode to participate in, theoretically simplifying matchmaking by ensuring that everyone's trying to play the same thing at the same time. While I wasn't always in the mood to play what the AI wanted me to, it was great at getting me into games quickly, and with a minimum amount of time spent waiting around.

Resident Evil 6 isn't any worse than it was when I reviewed it for the PC three years ago. There are highs and lows to the design, but it's a fundamentally solid action title with a few terrible design decisions that make it harder to get into than it should be. Anyone who missed it or only played it on last-gen consoles should give it a chance—as a budget release, it offers more value for money than almost any game I've come across. It still fails to live up to its potential, though, and Capcom's steadfast refusal to fix its problems after all these years means that I can't give it the pass that I would have if they'd at least put in a token effort. Rating: 6 out of 10

Disclosures: This game was obtained via publisher and reviewed on the PS4. Approximately 15 hours of play was devoted to single-player modes (completed 1 time) and 4 hours of play in multiplayer modes.

Parents: According to the ESRB, this game contains blood and gore, intense violence, nudity, strong language, suggestive themes. Don't let your kids near this one. Boozing, drugs, omnipresent brutal violence. It's just extreme and nasty from beginning to end, with depictions of torture, execution, and mass-murder. Just in case that wasn't enough for you, one of the bosses is a naked woman. She may be as smooth as a Barbie doll, but she's still every bit as sexualized as you'd expect a nude woman boss to be. Hell, one of the villains is partially motivated by a clearly sexual obsession with another character. This is all bordering on AO territory. Take the M-for-Mature seriously, please.

Deaf & Hard of Hearing: You're going to have some trouble. The camera is very close to the action at all times, so it's hard to get decent situational awareness going without the ability to hear the monsters sneaking up on you. There's no clue about where an attack is coming from until you're actually being attacked, so you're going to have some trouble with the higher difficulty levels. Consider playing co-op, so you'll have someone to watch your back. All cut-scene dialogue is subtitled, but in game comments aren't—you'll miss colour, but no content.

Dan, I think that you and I are the only two people on this earth that really enjoyed this game. Ssssshhhhhh… it will be our little secret.