Prepare for a flood… of zombies! 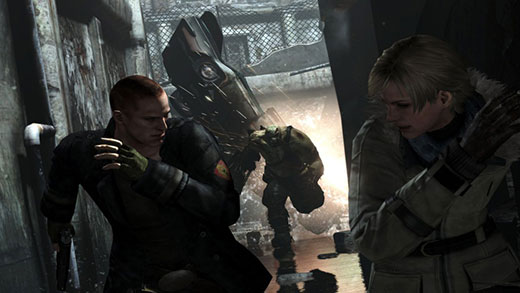 HIGH Throwing a grenade into a crowd of 40 zombies and watching the pieces fly.

LOW They fixed almost nothing!

WTF I still don't understand how or why Ada Wong is white now.

With unpolished gunplay and a legendarily terrible tutorial, Resident Evil 6

buried all of its considerable strengths behind an impenetrable wall of user-unfriendliness. Now that it's gotten a second bite at the apple, both through an extensive update for console versions and a release on the PC, it's time to consider how successful the changes have been.

In my review of Resident Evil 6, I lamented the game's unwillingness to explain its entirely new set of mechanics. How to fight hand-to-hand, how to manage herbs, how to use skills, even what order to play the game's chapters in: all were total mysteries to first-time players.

None of that has changed.

The tutorial is still woefully inadequate when it comes to giving instruction on the game's systems, players are still free to run the story backwards, enemies still don't drop health, and the developers don't bother letting players pause the game to fiddle with their settings in single player mode. I don't know if it's a lack of time and resources or an obliviousness to the game's shortcomings, but Resident Evil 6 for the PC steadfastly refuses to repair almost anything that was wrong with the original.

There are a few bright spots, however. A chapter system has broken up the game's hour-plus acts into more manageable twenty-odd minute chunks that can be dropped into or out of at will. Beyond that tweak, the only changes that RE6PC has to offer are technical ones.

If played on a computer with the recommended specs, all of the console version's occasional choppiness is gone, and the already-gorgeous game looks even more beautiful. Far more importantly than visual tweaks is the new gameplay mode opened up by the technological improvements of PCs – The Mercenaries: No Mercy.

Mindful of console limitations, RE6's developers were careful to ensure that their game never featured more than a handful of enemies in a given encounter, lest the framerate start to stutter. The whole game was built to take place in claustrophobic areas so that players would never notice how few enemies were attacking at any given time. No Mercy removes all of those restrictions and throws players into Mercenaries maps with twice as many enemies attacking in groups much, much larger than the original version.

Hordes of zombies or J'avo are on the players at all times, and guns are far more powerful in this mode by default, with just a few bullets being fatal to anything but boss monsters. The action is fast and overwhelming, with one or two players constantly having to move and shoot to keep from being trapped and swarmed. The only drawback to this great new mode is that it still has to be played with characters whose layouts were put together with the original Mercenaries in mind, meaning that sniper characters are at a huge disadvantage since their weapons fire too slowly to be effective against the onslaught.

remains a flawed game that's hard to get into, but with the technical improvements on PC and the new No Mercy mode, it provides more reasons for players to struggle their way past its mistakes to discover its delights. Perhaps it's still too experimental and difficult than the sixth entry in a series ought to be, but despite everything, RE6 offers top-tier cinematic action and series-high storytelling. For fans who've yet to try it, the PC version is the right choice.  Rating: 8 out of 10


Disclosures: This game was obtained via publisher and reviewed on the PC. Approximately 20 hours of play was devoted to single-player modes (completed 1 time) and 15 hours of play in multiplayer modes.

Parents: According to the ESRB, this game contains blood and gore, intense violence, nudity, strong language, suggestive themes. Boozing, drugs, omnipresent brutal violence. It's just extreme and nasty from beginning to end, with depictions of torture, execution, and mass-murder. Just in case that wasn't enough for you, one of the bosses is a naked woman. She may be as smooth as a Barbie doll, but she's still every bit as sexualized as you'd assume expect a nude woman boss to be. Hell, one of the villains is partially motivated by a clearly sexual obsession with another character. This is all bordering on AO territory. Take the M-for-Mature seriously, please.

Deaf & Hard of Hearing: You're going to have some trouble. The camera is very close to the action at all times, so it's hard to get decent situational awareness going without the ability to hear the monsters sneaking up on you. There's no clue about where an attack is coming from until you're actually being attacked, so you're going to have some trouble with the higher difficulty levels. Consider playing co-op, so you'll have someone to watch your back. All cutscene dialogue is subtitled, but in game comments aren't – you'll miss colour, but no content.