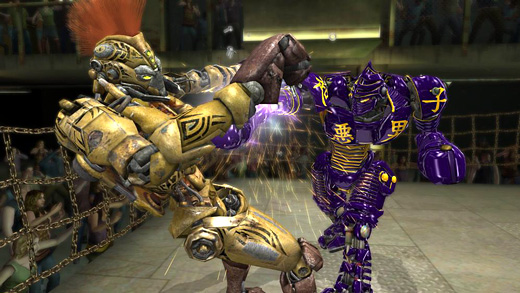 HIGH Decapitating an enemy with a flurry of punches.

LOW Success in the game is hidden behind a paywall.

WTF I have to pay real money to change my robot's colour? Seriously?

I enjoyed the film Real Steel. After seeing it, I figured why not try the tie-in game? My expectations were fairly low, but I think quite reasonable. I imagined a basic story mode playing as Atom, and the opportunity to use the various other robots from the film in local and online multiplayer. However, Real Steel

isn't a video game—it's a scam, and perhaps the first boxing game to require paid DLC in order to make the game playable.

Real Steel is a competent example of game design so long as it stays within the ring. The simple 4-button punching mechanics keep the flow of combat moving along at a brisk pace, as players have to deal with genre-standard health and stamina bars. Beyond blocking, the defensive controls are a little wonky, with swaying and dodging being frustratingly inconsistent—a training mode would have gone a long way towards letting players know which moves to use in which situations.

While the actual combat is good enough, everything that surrounds it is flat-out terrible.

Players take on the role of a robot "manager." Starting with a basic model, they're supposed to fight their way up through the underground fighting circuit until they win their spot on the WRB circuit. A pretty standard setup, except for one thing: the player is expected to invest their own money in order to accomplish the task. At the beginning of the game the player is assigned a robot with basic parts, and tasked with improving it until it's good enough to take the title. This premise would be fair enough, if everything in the game wasn't incredibly expensive, and all the matches didn't offer such paltry rewards.

Any part of the robot costs the entire proceeds of a match to upgrade a single time. Or it would, if players didn't have to also pay the cost of repairing their robot after every match—a price that can often reach half the purse in early stages of the game! It wasn't unusual to fight three or four matches before being able to afford a new arm, fist, or combo. That's three or four fights against the same robot, by the way—each successive robot is so massively overpowered that fighting them without extensive upgrades is a suicide mission. The terrible design removes skill from the equation entirely. Even the most practiced robot boxer in the world is going to get hit a number of times in every fight, and when an absurdly strong opponent needs just two hits for a KO, that fight becomes flat-out unwinnable.

Of course, requiring players to grind for hours on end for even small improvements in gameplay isn't an accident. Like extortionists, the developers have created a situation that's incredibly uncomfortable unless they're paid additional money.

Can't afford any parts for a robot? For six real dollars, the game will add a million virtual dollars to the player's account. Robot parts can also be bought piecemeal (although why would anyone?) for 2-3 dollars each. For players who want to skip the whole "building and leveling up" portion of the game, the developers offer pre-made robots, all for the bargain price of TEN DOLLARS EACH. I say "bargain" because buying the individual parts that make up those robots can run over 20!

To be clear—making the game playable literally doubles the price, and trying to buy the individual parts that make up the great robots could easily run into hundreds of real dollars.

All of this has the effect of completely unbalancing multiplayer, creating two classes of competitor—ones who merely played the game as it was presented to them (recognizable by their unpainted robots), and those who bought cheat codes (recognizable by having 5x as many hitpoints as normal fighters, and the ability to KO with three punches). The game's matching system doesn't pair people up based on the relative strength of their robots, so in 90% of my fights I found myself a featherweight in the ring with super-heavyweights. Sure, I'm scrappy and I can dodge well, but what does that mean when a single punch can take my head clean off?

actually was free-to-play, I suppose many of these problems could be overlooked. At least when not money is required up front, players go in fully understanding that they're going to have to choose between endless grinding or ponying up cash to keep the game moving forwards. However, Real Steel doesn't warn players that it's just a mechanism to extract ever-increasing amounts of money from them. By keeping everything good about the game locked away until players cough up the dough, Real Steel can be dismissed as terrible. In a more just universe, it would be the subject of a class-action lawsuit rather than merely a scathing review. Rating: 1.5 out of 10.


Disclosures: This game was obtained via download and reviewed on the Xbox 360. Approximately 6 hours of play was devoted to single-player modes and 1 hour of play in multiplayer modes. It was not completed (obviously).

Parents: According to the ESRB, this game contains fantasy violence. It's just as harmless as the film, with the only violence being robot-on-robot. Like in the film, the consequences of giant robot heads flying into the audience goes unexplored. There is no other questionable content, unless you consider children being taken in by a confidence game questionable. But hey, maybe learning how easily their money can be stolen will be a good lesson to learn. If I'd learned it years ago I wouldn't be out ten dollars now, for example.

Deaf & Hard of Hearing: The game features no notable audio cues. All of the game's information is expressed visually. Between energy bars and telegraphing punches, players should be able to keep track of things without any trouble.

The game isn’t actually *that* bad, but I too thought the game was rigged at first. There didn’t seem to be a way to level up your robot without paying real money, but after playing a little while longer I’ve found that is not the case. To be sure, the game IS challenging. It is NOT easy. I couldn’t get past the second guy for a long time and once my robot seemed to be maxed out, I (mistakenly) thought I had to pay real money to upgrade the bot to the point that he could challenge the 3rd guy.… Read more »