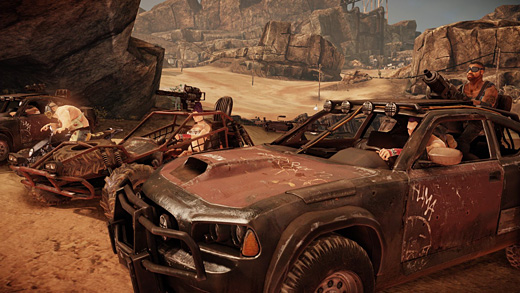 HIGH The impact of a perfectly-aimed tank round on a punk riding a trike.

LOW Getting stuck in the level geometry three times per game.

WTF No team deathmatch? In an FPS?!

As game development becomes broader-based and democratized, we're reaching a point where it's not unusual for a group of developers to simply get together and attempt to make a dream come true. Updates of franchises with fanbases of no more than a few thousand? Done. Bands commissioning entire video games to promote an album? Yup. At this moment there's an arms race in the game dev community to be the first to crack a "Romero Rules" zombie game.

Ravaged is a perfect example of this trend, since it seems to owe its existence solely to someone saying "hey, we could make a Mad Max game!" With today's tools it's actually not that difficult to accomplish— Ravaged's problem isn't with its ambitions, but rather that after that initial idea; apparently zero thought went into any element of the game's design.

A multiplayer-only first-person shooter (FPS), Ravaged drops players into a post-apocalyptic wasteland and assigns them to one of two teams—the civilized "Resistance" who are trying to preserve polite society, or the "Scavengers," monstrous thugs who want to pick the last meat from the bones of history before the end of everything.

Ravaged shoots itself in the foot almost immediately by making the two sides functionally identical. Each one has five "classes," each with their own player model, but those "classes" just boil down to weapon loadouts. There's no difference between the assault rifles that competing soldiers use, and the rocket launcher that the Resistance kept hidden in a bunker for decades works just like the one that the Scavengers found under a wrecked tank. The only advantage I could find is that the Resistance tends to have slightly better vehicles, which could have proved an unbalancing factor had the vehicle portion of the game (touted as its main focus!) not been such a disaster.

For a game that wants players to race around in modified V8s with grenade launchers welded to the roof, Ravaged's vehicles certainly are a mess. Even with the steering sensitivity turned all the way up they handle like bricks, and regularly get stuck in level geometry—although that happens when walking around, too, so it's probably a larger issue than vehicle design. 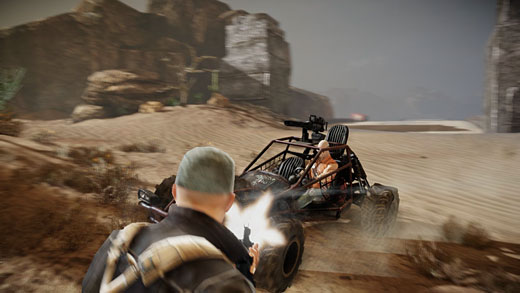 This is an action game—and in that context I want vehicles to handle like a dream. I want to speed towards an objective, my passengers blasting away at some foes, then pull a 180 and dash off, leaving some corpses in a cloud of dust. If I have to make a three-point turn in an atomic wasteland, then something has gone terribly wrong. Oh, and the less said about the helicopters, the better. There is a time and a place for realistic helicopter controls and physics, but that time and place is absolutely not in a game about shooting people around the wreck of the Statue of Liberty.

The developers' biggest mistake was spending most of their time worrying about vehicles without considering what kind of environment those vehicles would work best in. For a "vehicles-focused" game to have two levels without vehicles (and a third so small they aren't useable) is bad enough, but the map layout in levels where vehicles function is so atrocious that it keeps the game's core concept from ever coming close to working.

I don't know how they've managed it, but the developers have crafted levels that are unsatisfying no matter how they're played—the areas are so big that walking anywhere takes too long, but so small that driving only lasts a few seconds. It wouldn't be so bad if the game didn't require players to constantly get out of their vehicles, but there's another crucial mistake that put the final nail in Ravaged's coffin.

Vehicular combat is best suited to deathmatching. Fleets of deathcars rolling across open fields, blasting away and ramming one another, and then getting turned into bloody chunks as a semi slams into them at top speed… This is the dream of a Mad Max-themed game, and it's what Ravaged seems to aspire to. However, Ravaged apparently features no deathmatch modes—and offers no maps open enough to encourage that style of play. The only two types are capture the flag and hold the control point—and neither of those goals can be accomplished by people inside vehicles. As a result, the vehicles that are the game's purported focus serve only two practical purposes—either they ferry players quickly to an objective, or they act as stationary guns protecting an objective.

With a host of bugs, a fundamental lack of gameplay variety, and a key mechanic that doesn't serve the purpose it should, Ravaged is profoundly not the Mad Max game we've been waiting for. There's no reason to despair, however—this is the age when video game dreams come true. If nothing else, perhaps Ravaged can provide a cautionary example, letting the next group of people inspired by the Road Warrior see everything they shouldn't do. Rating: 3.5 out of 10.


Disclosures: This game was obtained via publisher and reviewed on the PC. Approximately five hours of play were spent on multiplayer modes. There are no single player modes.

Parents: According to the ESRB, this game contains blood, strong language, violence. It's a multiplayer shooting game with swearing in it. Of course your children shouldn't play it. There's no content other than constant violence. Relatively speaking, though, it isn't that severe. Bloody puffs when people are shot, the occasional exploding person. It's not like the Scavengers are wearing leatherface masks or anything like that.

Deaf & Hard of Hearing: There's no dialogue to miss and objectives are clearly marked onscreen, but you're going to have the standard FPS problem of not knowing you're being shot at until directional hit indicators start popping up onscreen.