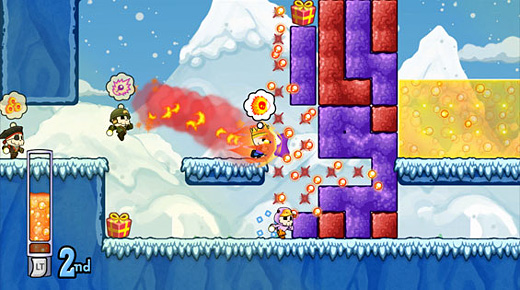 HIGH Having a whole mountain stop just short of crushing me because of a well-timed shot.

LOW The computer swooping in and stealing a win at the last moment, over and over again.

WTF The repeated cameos made by the developer—figuratively, anyhow.

If downloadable games have reminded me of one truism, it's that adorableness can effectively cover for a large number of flaws.

for example. As I first booted up the game, I had no idea what the underlying premise of was. So, when I was presented with a group of PiRats (whose name suggests their animal species and costume) desperate to get their crashed space-sloop running again, I had no idea whether they were the game's pro- or an-tagonists. It turns out they were the latter, and the plot of the game revolves around a series of costumed skeletons attempt to prevent those rats from stealing power crystals by engaging them in a series of racing contests—but the very fact that the villains were every bit as cute and engaging as the heroes let me know that, even if the gameplay didn't hold up its end, at least the story would provide a heart-warming diversion.

Fortunately the gameplay doesn't disappoint, although the developers' attempts to offer a new spin on the puzzle game offers wildly divergent results depending on how many players are onscreen at a given moment.

A puzzle-platformer in the truest sense of the term, Raskulls takes the gravity-based gameplay of Collapse (where all connected bricks of one colour are destroyed when clicked on) and twists the formula by putting the blocks inside a 2D maze that player has to navigate by plowing through through them, one coloured square at a time. Just placing the player physically inside a space that they'd traditionally interact with from a distant perspective feels innovative and fresh—and the constant threat of having a character physically crushed by falling blocks adds an immediacy to the threat that's hard to replicate in more remote puzzling experiences.

Raskulls also offers quite a bit of variety in the puzzle designs themselves. Most of the levels simply ask the player to proceed as quickly through a maze as possible, but when the developers begin to delve into the rules of their game, the levels get downright captivating. 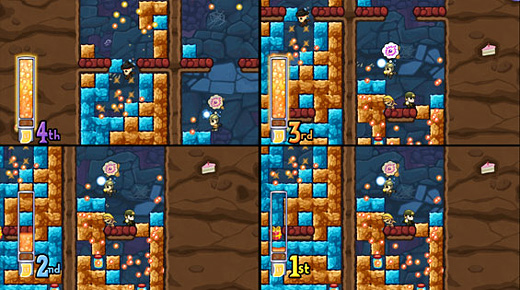 Whether players are asked to get through a tower of blocks while only destroying a limited number, carve specific shapes and colours to please a demanding dinosaur, or, most interestingly, to tunnel upwards to reach the top of a level being careful not to drop the whole mountain on their head, Raskulls constantly throws new and interesting twists at the player. My only disappointment here is the game's relatively small number of levels of each type—there are just 3-5 instances of each kind of puzzle, which is unsatisfyingly small, even for a downloadable game.

The other problem with the game is a serious one. There are racing levels in the game, and these are the single best-represented mode, as well as what makes up the multiplayer component in its entirety. These race levels pit the player against 1-3 opponents, all trying to get through a block-filled maze as quickly as possible. The problem comes with the pace of Raskulls's gameplay—players destroy blocks by touching them with a zap wand—the blocks disappear, and there's a slight delay before any supported blocks start to fall. It's a simple enough system, and effective for a puzzler, but when competing against other players, cracks in the premise start to appear.

No matter how much of a lead a player might get over their opposition, the act of simply destroying all those blocks is so time-consuming that there's always an opportunity for those left behind to catch up and do some blasting of their own. Even those left in the dust by a bad turn in the maze will be able to quickly catch up by simply running down empty pathways wiped clean by those who went before.

At first, the fact that all the players are constantly on top of one another seems thrillingly tense, but after a dozen online games (and all the single player levels) it began to feel like the winner of each individual race was based more on random chance than any real skill. No matter how well I had the levels down, there was always someone ready to swoop in at the last second through a hole I'd made—and a quarter of the time, I was the one doing it to them.

The racing issue aside, Raskulls

shines whenever the player is left alone to work through one of the ingeniously-designed puzzle levels. While the more action-packed sections of the game are something of a disappointment, I can't criticize the developers too harshly—after all, multiplayer puzzle games are notoriously hard to crack. It would have been nice if the developers had focused on giving single players a slightly broader experience, since that's obviously where their talents lie—but all in all, it's a wonderful experience that's perfect for anyone who likes their puzzling to be tinged with just a little danger. Rating: 8.0 out of 10.

Disclosures: This game was obtained via publisher and reviewed on the Xbox 360. Approximately 4 hours of play was devoted to single-player modes (completed 1 times) and 1 hours of play in multiplayer modes.

Parents: According to the ESRB, this game contains crude humour, mild cartoon violence. The game is rated 10+ for a reason. While most of it is harmless cuteness personified, there are a few jokes that step across the line into areas that might not be appropriate for your children. There's some implied nudity, a running gag involving people being smashed in the head with a brick, and, most questionably, a joke about a wizard attempting to 'woo' a female raskull with a drugged drink. Given how accessible and fun the gameplay is, the story could have stood to be slightly more harmless than it is.

Deaf & Hard of Hearing: You will be fine—the game features no audio cues, and full subtitling of the wacky story!