My Childhood On A Disc 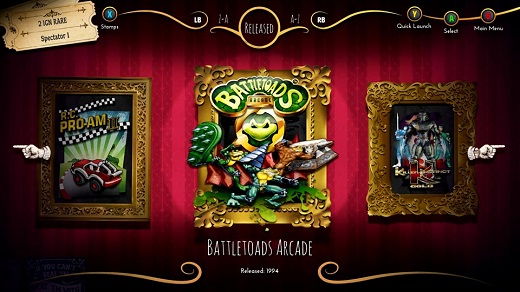 As a collection of games, Rare Replay is defined more by the missing games than the ones that made the cut. It's a fairly comprehensive slice of Rare's history, offering 30 of their titles in a single package, and the selections span three decades, starting at 8-color PC titles and going right up to the Xbox 360. There are adventure games, shooting games, groundbreaking titles and me-too cash-ins. As the attached bonus content makes clear, Rare has been an incredibly hardworking group of developers for the entirety of the company's history, and while their output has severely dropped off in the past decade, their legacy remains impressive.

The best thing about Rare Replay is the self-awareness on display. The people putting this collection together understand that the games from the 80s and 90s were made for audiences with entirely different expectations and ideas about what a video game consisted of. Modern gamers would find these early gems borderline unplayable if it wasn't for the ability to turn on 'infinite lives' in the options screen.

Even more impressive is the 'rewind' function, which gives players the option to take back the last 10 seconds of gameplay, erasing any missed shots or ill-timed jumps. Sadly, Rare didn't bother to include maps to some of their exploration-themed games, which renders them basically unplayable without graph paper or a trip to the internet.

As for the games themselves, the quality varies wildly, as one would expect from a collection this comprehensive.

The PC titles start out well enough with Jetpac, a limited but engaging single-screen platform shooter. Then, Replay stumbles with Atic Atac and the Sabrewulf trilogy, all of which feature huge maps that are easy to get lost in and no fun to explore. Then there's Gunfright, which demonstrates an interesting method of simulating 3D environments using an isometric POV, but is otherwise complete garbage.

The most interesting game in the bunch is Lunar Jetman, a sequel to Jetpac that adds enough complications to the first game's formula to make things interesting. Players can still hover and blast aliens, but they're also tasked with dive-bombing alien missile bases and repairing roads to drive an invulnerable moon buggy from one destination to the next. While not a great game, its clever use of the medium's limited resources is a harbinger of the kind of work Rare would go on to do in the future.

The NES collection represents itself much better. The headliner, Battletoads, is as great as it ever was, and remains an endlessly inventive brawler that leaves its competition in the dust. The RC Pro-AM series also impresses, as do Cobra Triangle (a thrilling boat chase game) and Digger T. Rock, a Spelunker-esque cave crawl.

Somewhat baffling are the inclusion of Snake, Rattle, and Roll (a confusing mess) and Slalom, which is just plain awful. Licensing issues likely restricted what was available from Rare's NES output, and it's a tragedy, since Nightmare on Elm Street's four-player mode would have been a great addition to the disc, and Battletoads & Double Dragon is nearly as good as the original.

The SNES and N64 era is where Rare Replay really falters. While it's perfectly obvious why Nintendo's Donkey Kong series couldn't appear on a Microsoft console, this means a huge amount of Rare's best work goes unrepresented here. Just as frustrating is the lack of Goldeneye 64, one of the most important console games of all time.

So what did make the cut? Jet Force Gemini is a fun, if slightly hard to control shooter, and Blast Corps offers plenty of anarchic thrills. Sadly, the inclusion of Perfect Dark and the Banjo series feels underwhelming since they've all been available on the Xbox 360 for years. Luckily, Conker's Bad Fur Day is just as funny and brilliantly constructed as it was the day it came out.

Rare only released one original game for the Xbox, Grabbed By The Ghoulies. Playing it again, I found myself just as enthralled and frustrated as I'd been over a decade ago when it was first released. It's a beautiful game with amazing character design, clever writing, and a fantastic world. Unfortunately it's extremely difficult to play, thanks to a non-standard control scheme.

The idea in Ghoulies was to let players attack in 360 degrees by tapping in a direction with the right thumbstick while using triggers to control the camera. It's weird, but not too difficult to grow accustomed to. The bigger problem is that instead of attacks being instantaneous, the player does a little wind-up before every strike, making attacks incredibly difficult to time correctly. It leads to no end of frustration. Ironically, the player will be handed a gun of some kind at several points during the campaign, and suddenly it becomes a responsive twin-stick shooter. These episodes only last for a few minutes, though, forcing players to imagine what a classic the game might have been if all of the combat was that good.

The rest of the Xbox 360 collection almost doesn't bear mentioning. Kameo is a fun but utterly forgettable adventure game, Perfect Dark Zero is stiff and uninteresting, and the Viva Pinata series is slow even by the standards of farming games, with only its cute characters and witty asides keeping it from being completely insufferable. Banjo-Kazooie: Nuts and Bolts isn't as bad as its reputation, but it really does lack the amazing level design of the first two titles.

The process of putting together Rare Replay must have had its developers pulling out their hair. What could be more torturous than being asked to put out the definitive retrospective of a company's output without being given access to the majority of its best work? Still, the developers have gone the extra mile to make even the most primitive games on display as playable as they could, and for a budget-priced game it offers a truly shocking amount of content. There was never any question that I was going to obtain and enjoy Rare Replay, but there's enough great content here to ensure that even those players who didn't grow up with these games will find a lot to love. Rating: 7.5 out of 10


Disclosures: This game was obtained via retail store and reviewed on the Xbox One. Approximately 25 hours of play was devoted to single-player modes, and some games were completed. 5 hours of play were spent in multiplayer modes.

Parents: According to the ESRB, this game contains: blood, language, mature humor, use of alcohol and tobacco, violence. That warning refers almost exclusively to Conker's Bad Fur Day. Beyond that and some headshots in the Perfect Dark games this is completely safe for children. Just make sure they avoid those three titles and you're golden.

Deaf & Hard of Hearing: This isn't going to be great. While the modern titles have subtitles and detailed menus, some of the older titles often use audio cues to let you know that something dangerous is on the way, or that your health is getting low. It's going to make some of the earlier titles much more difficult to play, but by the time you get to N64 you should be largely fine.