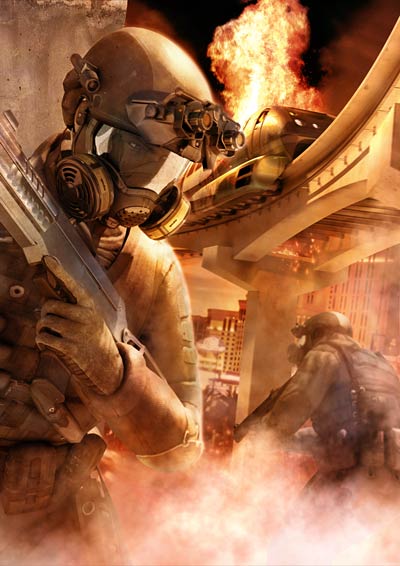 In producing Rainbow Six Vegas 2, Ubisoft Montreal had perhaps the easiest job in the history of videogame development. Their previous game, Rainbow Six Vegas, was the best first person shooter ever made, artfully blending traditional realistic first-person shooter (FPS) design with a kill.switch-inspired cover system, seamless team controls, and fantastic multiplayer. It raised the bar so high that all subsequent FPS titles have looked pathetic in comparison. The only thing they needed to do to ensure that the sequel was a success was design a few new levels, add a few new guns, and wait for the dollars to start rolling in. What makes Rainbow Six Vegas 2 such a special title is just how far above and beyond the developers went, turning in a game that improves on the first one in nearly every respect.

R6 Vegas 2 takes place at exactly the same time as the first game, telling the story of a second team of international commandos sent into Las Vegas to deal with an outbreak of rampant criminality. Many reviews have incorrectly dubbed the enemies 'Terrorists', but this is a misnomer, as the crimes are being committed for the promise of profit, with nary a social or political motivation in sight. Beyond the occasional message popping up to inform players where the next crime is taking place there's little plot to speak of, although the game is nice enough to wrap up the dangling threads left by R6V's cliffhanger ending.

Of course, it's rare that someone comes to a shooter for the plot, and in a genre where gameplay is king, R6V2 is king of gameplay. No changes have been made to any of the core dynamics—making one's way through the game is still a tale of careful progression, using cover intelligently, and employing tandem team tactics. With action that leans more towards 'puzzle' than 'arcade', Vegas 2 is sometimes restrictive in that there really is a 'correct' way of dealing with every enemy encounter. Clever, cover-using enemies combined with realistically damaging weapons ensure that the game cannot be played as an exercise in running and gunning. While this deliberate pace and lack of variety in the gameplay might turn off the twitch or sandbox gamer, anyone looking to use a little strategy will find themselves rewarded for the patience they devote to learning the game's rhythms. 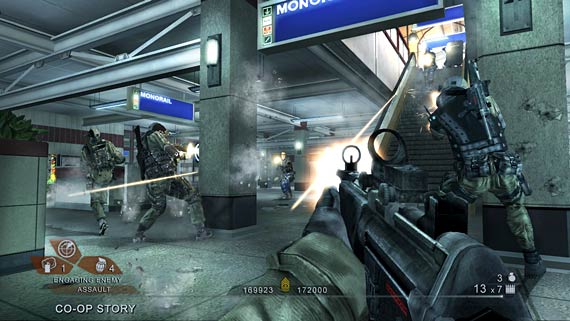 The level design is also on par with the previous title, but while the layouts and enemy placement are stellar, the environments suffer from the last game having already snapped up all of the definitively 'Vegas' locations, with its two casinos, stratospheric hotel, and visits to both Freemont street and the Hoover Dam. The levels this time around seem to have been chosen based around answering the panicked, last-minute question: "Um… is there actually anything else in Vegas?" Well, according to the game, there is, it's just not all that interesting.  An office park, a trainyard, and a refinery aren't the most original locations. It doesn't help matters that three of the most interesting levels are expanded versions of multiplayer maps from the first game, either, which will likely leave anyone who played Rainbow Six Vegas with a sense of déjà vu stronger than the one normally associated with sequels.

So if the gameplay is the same and the maps are a little blander, just how can I announce that the game has been improved in almost every way? The completely revamped rewards system and multiplayer modes, that's how. While the first game forced players to compete in online deathmatches and terrorist hunts to level up and gain access to a wide variety of weapons and armor, R6V2 uses a system of rewarding players for every kill they score or objective they achieve in any game mode. This ensures that even the most antisocial gamer can get a chance to see everything the game has to offer, given enough dedication. 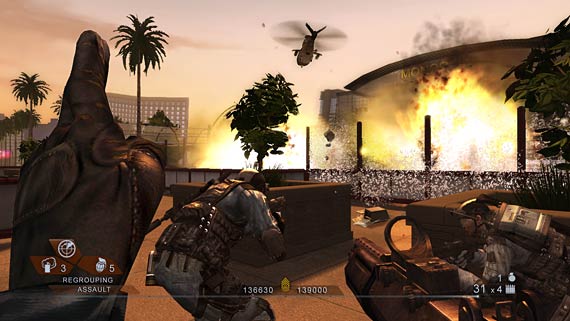 The improvements to the multiplayer mode are even more significant. In an 'ain't broke, don't fix it' move, the deathmatching and teamplay modes have been left unchanged, a move that's sure to satisfy the legion of fans that are still playing the first game. The real story, though, is that and the cooperative mode has been completely revamped. Last time around, the co-op mode was limited to replaying the game's levels as a shooting gallery. The enemies were in the same places, and the limited respawning made things a little easier, but there was no plot or specialized actions. No hostages to be rescued, bombs to be defused… anything the computer AI handled in the single player mode was removed for multiplayer. This time the entire story is playable: every line of dialogue, every plot twist, it's all there for people to enjoy, even the checkpoints that keep players from having to ever replay more than five minutes of the game, no matter how royally they've screwed up.

For a trip back to the well, R6: Vegas 2  proves an unusually excellent cash-in. I'd be lying, though, if I said that my two favorite levels weren't the prologue and epilogue, which both forgo the Vegas setting for a trip to an exotic locale. For two games now, Vegas has been very good to the Rainbow franchise, and given just how well the first one was received, I understand the impetus to recycle assets and crank out a sequel as quickly as possible. That being said, next time around Ubisoft Montreal should take another few months and come up with a wider variety of locations, like the series used to boast in the Red Storm days. We haven't seen any hijacked airplanes or cruise ships in a while, have we? And seriously, when was the last time someone took the staff of an embassy hostage? It's time to put the ‘international' back in ‘international antiterrorism force', Ubisoft, because no matter how rock solid the central gameplay is, people are eventually going to get sick of shooting the same mercenaries over and over again. Rating: 9 out of 10

Was this review a joke or did you actually mean the stuff you wrote and score you gave it?