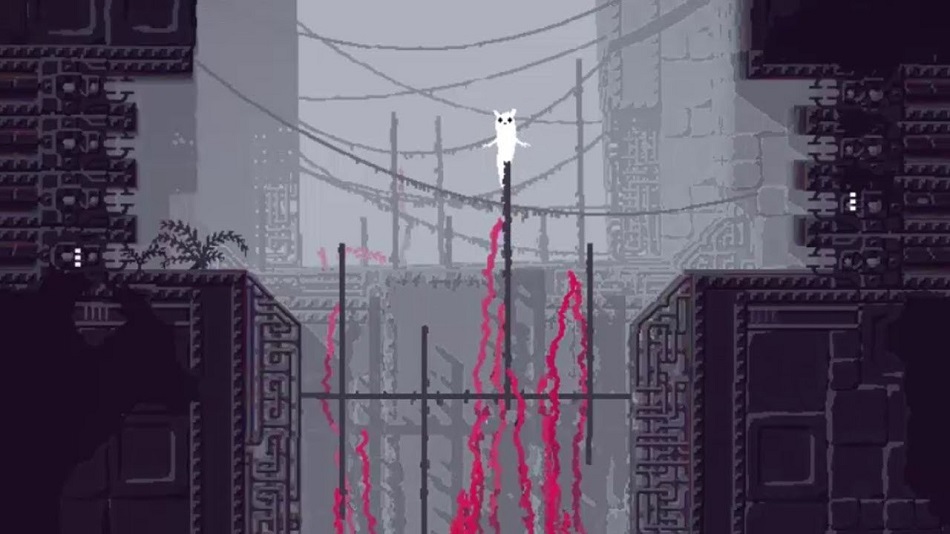 LOW Dying ten times in a row because it’s not clear how drowning works.

WTF I think my tutorial robot is fantasizing about killing me.

Perhaps it’s odd to ascribe emotions to a planet, but I feel it’s safe to say that the titular Rain World absolutely hates every creature unlucky enough to live on its surface. A harrowing land full of hunted, hunters, and hunters of hunters, the game is packed with innumerable threats designed to test the patience of even the hardiest adventure-platforming fan. And if the deadly flora and fauna weren’t enough, every few minutes the promised rain arrives in dagger-sharp waves crushing those caught out of cover and drowning everything in it.

Players control Slugcat, a painfully-adorable pixel-art mascot who begins the game separated from its family. Slugcat must find its way through this incredibly hostile environment on a journey towards… well, I won’t spoil any the surprises, except to say that Slugcat’s options can feel almost overwhelming at times.

Trying to lead Slugcat towards a goal is complicated by Rain World‘s almost total lack of instructions. As the game begins the player will run into a friendly eyeball on a stalk that uses holograms to teach the controls – but that’s it. Other than the occasional hologram warning about which creatures are especially hostile, players are essentially on their own as they struggle to determine in which direction they should travel. Rain World is an elaborately designed maze stretching out in every direction, and the only restriction it places on players is that it asks them to develop the traversal skills – pouncing, wall-jumping, using spears to create ledges – necessary to get to the trickier areas.

Rain World‘s first couple of hours can be a dispiriting slog. As players begin to explore, they’ll find themselves dying over and over again – chomped on by any of a dozen carnivorous beasts, or drowned because they didn’t find enough food to hibernate their way through the overnight downpours. All of that failure builds skills quickly, however, and once players make it through the first Outskirts area, they’ll discover an incredibly diverse set of environments for to employ their skills in. 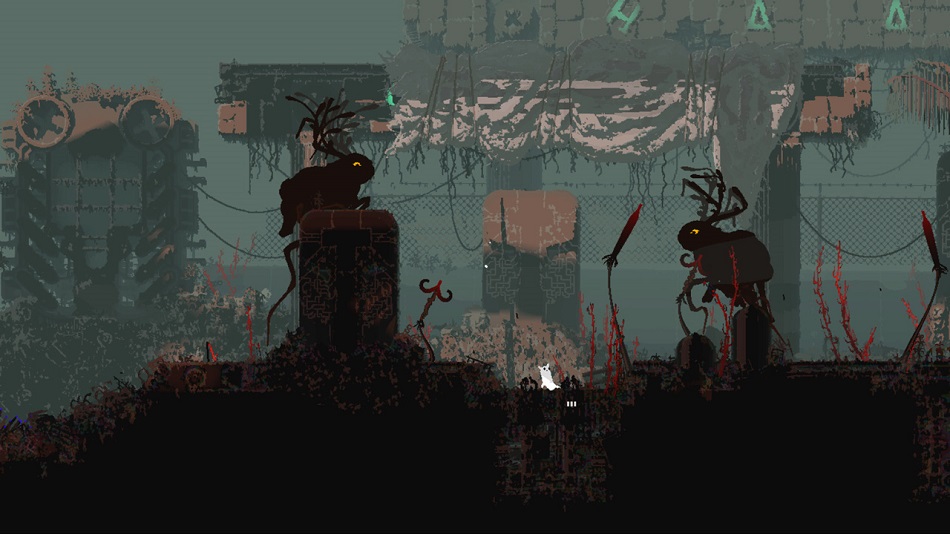 The artists and animators working on Rain World have done a brilliant job in creating a post-apocalyptic land that feels truly inhabited. In addition to the persistent threat of color-coded lizards that pop out of crannies and nightmarish vultures that swoop out of the sky, every area has distinctive creatures that fit perfectly within it. As I delved deep into lightless catacombs I found myself following bioluminescent kittens, while a crumbling archipelago was inhabited by dangerously playful squids. The creatures are drawn with exquisite care, featuring some of the most oddly attractive pixel art I’ve seen in ages.

If the game has a flaw, it’s the attempt to innovate with enemy design and placement. The developers have chosen to randomly shuffle creature numbers and locations after every one of the player’s deaths, as well as having the enemies learn and adapt to the player’s strategies. Like climbing up a pole and leaping over the head of approaching snakes? They may start rearing up and snapping Slugcat right out of the air.

This makes for a great level of challenge and encourages the player to continually update their techniques, but it also creates many frustrating situations in which the player will find that the only exit through an area is blocked by a deadly lizard because the AI has decided that’s the best way to catch them out. I understand that this kind of random occurrence is the price to be paid for an otherwise constantly-innovating game, but it still feels unfair.

Rain World asks players to get to know its world over dozens and dozens of lives, to figure out each area one at a time, learning to time jumps and hurl spears to earn their right to survive in a ceaselessly hostile environment. It’s a gorgeous jaunt through an alien world full of horrors, like Another World crossed with the open map of a Metroidvania title. With its incredible art design, tight controls, and extremely deep set of gameplay mechanics, this is a truly special platforming experience that anyone with a high tolerance for constant failure owes it to themselves to try out. Rating: 8.5 out of 10

Disclosures: This game is developed by Videocult and published by Adult Swim Games. It is currently available on PC and PS4. This copy of the game was obtained via publisher and reviewed on PS4. Approximately 8 hours of play were devoted to the single-player mode, and the game may have been completed. I’m really not sure. I got to what seemed like an ending and received a trophy for it, but the game kept going… so I can’t say for certain. In any event, there’s a lot more I haven’t seen. There are no multiplayer modes.

Parents: According to the ESRB, this game is rated E10+ and contains fantasy violence, and mild blood. It’s another example of the content descriptors missing context — yes, there’s almost no blood, but the violence in this game can be surprisingly scary and traumatic. Jumping onto a pipe and discovering that it’s a hungry carnivorous vine is frightening, even if it isn’t visually upsetting. Also, some fairly tragic things can happen in the story, so maybe keep the younger kids away from this.

Deaf & Hard of Hearing Gamers: While the game can largely be played without audio – there are generally matching visual cues to any sounds – music cues can offer hints about upcoming danger, and the game will be considerably more difficult without them.