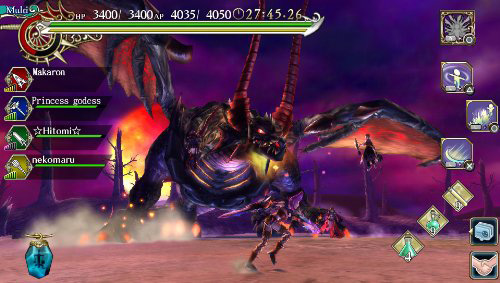 LOW Oh, good, another magically-sealed area where I have to kill 80 monsters to proceed.

WTF "These monsters are just too cute to kill! Here, player, you do it."

As Brad suggested in his main review, Monster Hunter casts a long shadow over Ragnarok Odyssey

. It can't be overstated how fundamentally important the popularity of Capcom's landmark series is to the existence of Ragnarok, nor how poorly this game fares in comparison.

Set in an unbearably generic fantasy world, Ragnarok puts players in the role of a mercenary helping defend a kingdom from orcs, huge ants, and the occasional giant. This is accomplished by killing hundreds of generic, respawning foes while trapped in tiny magically-restricted arenas. These arenas are the game's single largest problem, which drag it down from a potentially passable ripoff into an interminable slog.

It's rare to see game design as sloppy as Ragnarok's. After players have picked one of the character classes (standing in for MH's weapon classes) and met friends online or hired some NPC mercenaries, they're dropped into one of the game's multi-area levels.

While the basic idea of searching through interlinked areas to find monsters and items is sound, the missions are startlingly linear. I played halfway through the game, and with just one or two exceptions, every level was partitioned to make sure that I only ever traveled in a single direction, going to the proscribed areas in the pre-planned order. It's rare in this day and age to find a game that actively discourages players from exploring—not that there's much exploring to do.

If being forced to walk through tiny areas in a certain order weren't bad enough, the constant 'killboxes' take the game from merely frustrating to outright inexcusable.

Perhaps afraid that if players could just run from one side of the level to the next they'd realize how tiny everything is, the developers put in the most artificial roadblock imaginable— impassable magical walls that trap them until a certain number of foes have been killed. The game leans so heavily on this terrible gimmick that nearly every level other than the boss fights is entirely designed around it. Sent to find twenty orc claws? Look forward to being trapped in six successive force fields until those drop! They need a hundred slimes killed? That should take about seven force fields!

Even the aesthetics are sub-par. The foes are cartoonish and generic, more suited to a phoned-in JRPG where their limited moveset and dull design wouldn't draw so much attention. The levels are similarly uninteresting, with flat, repetitive terrain that doesn't offer a single memorable detail. I'd let the developers off with the excuse that Ragnarok was originally a portable game, but this isn't an issue of lacking technology—it's the complete absence of any artistic spark. There are big scorpions and bigger wolves. Absolutely no one was pushing themselves to bring something new to the table.

is such a mess that I have a hard time imagining anyone who would appreciate it. The only reason it could possibly have been released is the naive hope that PS3 owners distraught by Capcom and/or Sony's refusal to release a North American Monster Hunter title  will be so desperate for similar content that they'll take anything even slightly similar, and even for those people, I couldn't possibly recommend it.  Rating: 3 out of 10


Disclosures: This game was obtained via publisher and reviewed on the PS3. Approximately 15 hours of play was devoted to single-player modes, (game was not completed) and 2 hours of play in multiplayer modes.