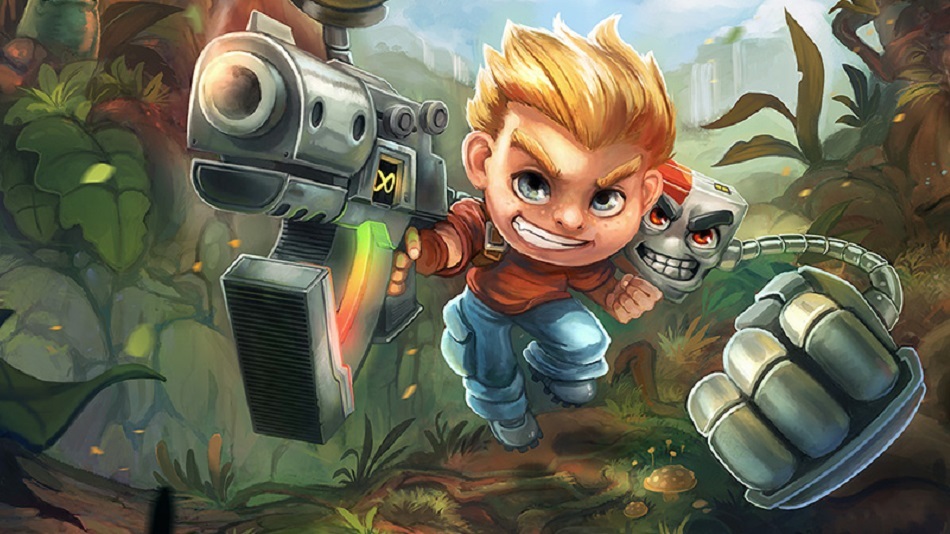 WTF There are spiky death floors that look almost exactly like safe floors.

As Rad Rodgers opened with a kid being dragged into his television screen along with his magical talking SNES-esque game console, I couldn’t help but wonder why Nintendo had never gotten around to putting out a Captain N video game. Unfortunately, nothing about the gameplay that followed was interesting enough to drive that idle thought out of my head.

As a visually lush 2D platformer, Rad Rodgers functions as both a tribute to classic jump-and-shoot games (specifically Earthworm Jim) and also as a slight parody of them. Rad is pulled into a magical forest full of bloodthirsty faeries, and it’s up to him, his sentient game system, and his trusty storm bolter to resolve the situation with a maximum of bloodshed.

Levels all have the same goal – find four pieces of an amulet and unlock the exit door. Beyond that, they’re broken into two general types. Linear levels ask the player to generally proceed left-to-right, making challenging jumps and killing hordes of enemies. Then there are open-concept adventure levels, where the player has to go looking for the amulet pieces, which could be hidden just about anywhere.

The linear type of level is much more successful than the second – so long as it sticks to running and gunning, it actually works well. There are a few problems with enemies that target too accurately and have super-fast projectiles (accuracy or speed, developers, but never both in the same enemy) but since the player can fire in any direction with the right thumbstick while moving with the left, most combat situations can be overcome without too much trouble. 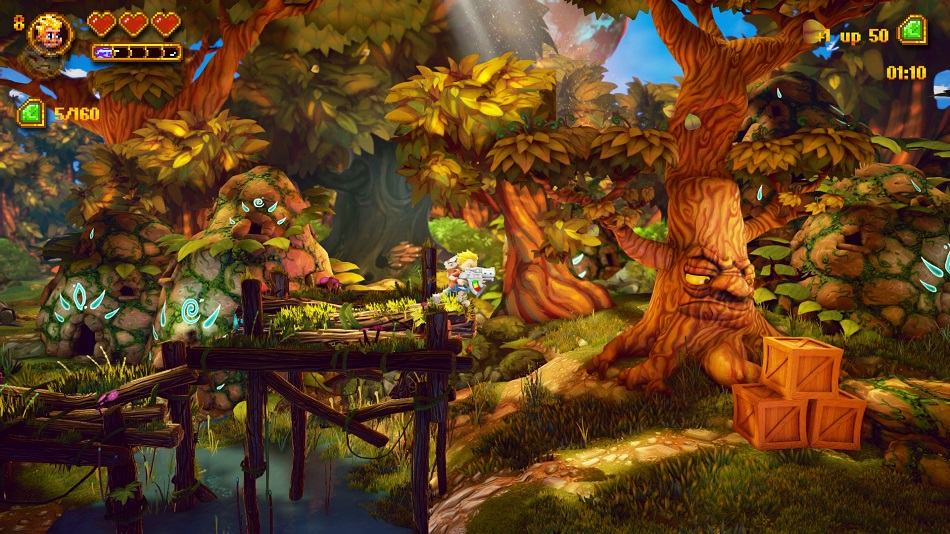 The open search-based levels tend to be more frustrating. The aesthetic of gnarled trees and rocky mines gets repetitive fast, and it’s easy to get lost and forget which part of a level has already been explored since there are few memorable landmarks. More than once I found myself running in circles, wasting time while desperately searching for the final piece of an amulet. A map or some kind of compass would have gone a long way towards making these sections more playable.

Apart from these two kinds of levels, Rad Rogers has one interesting idea to go with the ‘sucked into a videogame’ narrative. Occasionally levels will be ‘broken’ – missing platforms make travel impossible, boulders block necessary paths – and the player will have to send their console into a glitch to fix the game’s code. Sadly, this plays out in a minigame that’s much more frustrating than it should have been.

The console must fly through mazes, avoiding walls, obstacles, and constantly-respawning creatures that chase after it. However, the console slides around badly, rendering it almost uncontrollable. Also, instead of making this minigame a twin-stick shooter, the console only has punches, and they’re shockingly short-ranged and difficult to aim.

The worst, though, are puzzles where the console has to plot a path through electrical nodes without doubling back. They’re decent in theory, but broken in practice because the console has to use its life energy to power up each node, and the puzzles eventually become so complex that even if the player makes it to them with full health, the console still won’t be able to survive. So, the player is forced to complete puzzles by hunting down enemies and killing them for bonus health while also contending with ridiculously tight time limits and awkward combat.

I have no doubt that the developers of Rad Rodgers meant their work to be a loving tribute to 16-bit platformers, and as long as the game restricts itself to fast action, it’s a perfectly fine experience. The puzzles and item hunting just don’t work, though, and those designs shouldn’t have made it through testing. Rad Rogers never rises to the level of the games it’s aping, which renders it inessential, because what’s the point of an homage that’s not even as good as its inspiration? Rating: 4.5 out of 10

Disclosures: This game is developed by  Interceptor Entertainment  and published by 3D Realms/THQ Nordic. It is currently available on PC, XBO, and PS4. This copy of the game was obtained via publisher and reviewed on the PS4. Approximately 6 hours of play were devoted to the single-player mode, and the game was completed. There are no multiplayer modes.

Parents: According to the ESRB, this game is rated Mature and contains Blood, Mild Sexual Themes, Strong Language, and Violence . The game luxuriates in blood and gore, with exploding faeries being the main reward for successful gameplay. Rad’s console sidekick is ceaselessly foul-mouthed as well. In a nice touch, though, these mature elements can be turned off, transforming the game into more of a classic Commander Keen-style adventure!

Deaf & Hard of Hearing Gamers: I played the game with the sound off for more than half of my time with it, and had no trouble. Also, because there aren’t any subtitles, I managed to avoid most of my sidekick’s attempts at wit. While it was fine for me, this game is not fully accessible.