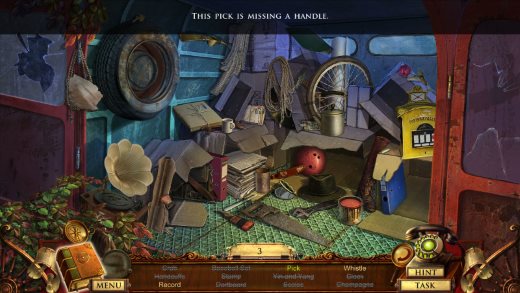 This one was a bit of a puzzle, because elements beyond its control had me going in with expectations far higher than the game could have possibly achieved. I'll explain.

There's a game called 'Infected: Twin Vaccine'. It's the second-best HOG ever made, right after Campfire Legends: The Babysitter. The story concerns the search for a missing child in a town that has befallen a tragedy. The players attempts to find the child are blocked at every turn by a sinister figure rendered in the best FMV that 2012 had to offer, as a man in a mask lumbers around in front of a greenscreen, looking entirely out of place in front of the drawn backgrounds. So when Questerium: Sinister Trinity opened in an incredibly similar fashion, right down to the costumed FMV man capering about in front of gorgeously painted tableaus, I was on board. But where would the ride take me? 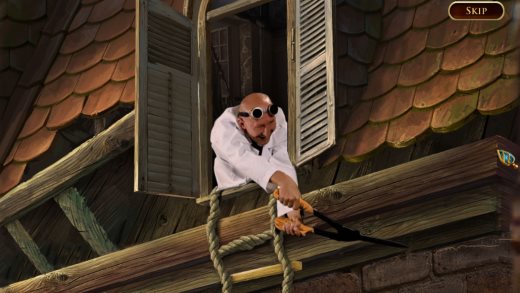 It's not too bad this time. Questerium plays the 'destroyed town' card pretty hard, assuming that will justify any combination of items turning up in any area. It's never completely believable – there are too many instances of completely arbitrary items dropped in random locations – but by and large, the screens err on the side of plausibility and attractiveness. While some of them may not make sense, they're all gorgeously drawn in their dilapidation.

Standard 12:1 gameplay all the way through this time. The player needs an item, so go find a whole lot of them, with not even a tiny figleaf of justification. These are some of the easiest HOSs I've seen in a while, though, with the clear and professional art style offering players a clear view of the items they're searching for. The game doesn't cheat in item size or colour, only occasionally offering unclear instructions on what players are supposed to find – such as this image, in which the player needs to find a single 'fan', where two are clearly visible onscreen. 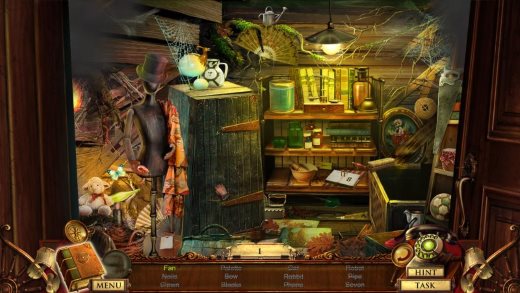 Yes, the solution is as simple as clicking on each in sequence, but it's still annoying. Can you guess which fan it was? The solution can be found in my video playthrough!

With the arbitrary searches doing the game's story no favours, the puzzles have a lot of slack to pick up, and they're not really up to the task. While many of them are entertaining and just a little challenging, a couple of the puzzles are so poorly-explained that they had me jamming on the 'skip' button until it filled up. Never a great sign. The game also leans a little too hard on the assumption that players will be comfortable hitting the 'hint' key letting them know where they're going to need to go next. The ruined town is filled with numerous obstacles to overcome, so many in fact that it's easy to lose track of which item is supposed to go where – and the game's journal does a terrible job of offering guidance. I came across this problem the hard way, when the bonus chapter's hint button steadfastly refused to point me anywhere other than a puzzle I'd solved right at the beginning of the game. This lack of help turned the chapter into a frustrating slog that had me ready to quit time and again – but, to the game's credit, when I finished the game, the plot's resolution was fairly satisfying.

Questerium: Sinister Trinity was never going to live up to Infected, which offered fully integrated HOSs to go along with its gorgeous art and compelling story. That failure to live up to a wholly unreasonable standard of excellence shouldn't be held against the game, however, which is perfectly fine in its own right. Even though things got a little uncomfortably confusing at times, I enjoyed nearly all of Questerium. Although I never really figured out what the title was supposed to mean.

Want to see the super-eventful playthrough that led to this review? Just check out this YouTube playlist!

Questerium: Sinister Trinity is available for purchase from Steam!