A measure of quality 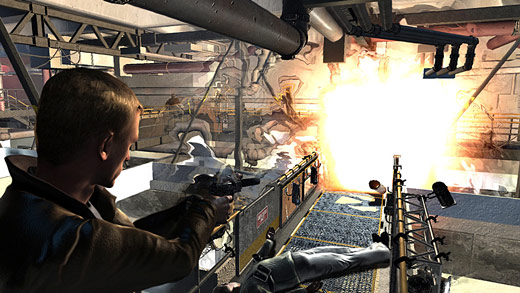 HIGH Getting to have a 16-player deathmatch on a faithfully updated version of "Facility" from GoldenEye.

LOW There are stealth sequences. In a first person shooter.

WTF Why is the Golden Gun a rapid-fire grenade launcher?

It's been well established elsewhere that Tom Clancy's Rainbow Six Vegas gave the world the ultimate shooting game design, effortlessly melding the immediacy and realism of first-person shooters with the strategy, situational awareness, and cover mechanics of the third person genre. There was only one thing standing in the way of Rainbow Six's recognition as the progenitor of a new generation of superior shooting games: Someone had to take the plunge and shamelessly rip off all of the gameplay mechanics in order to prove that they were just as sublime when handled by developers other than the ones responsible for their creation. Stepping up to prove this theorem is Quantum of Solace, whose wholesale appropriation of nearly everything that made Rainbow Six Vegas great is a pleasure to behold. The fact that this theft is employed in an attempt to recreate the magic of GoldenEye acts as icing on the cake.

From the first moments set at the end of the film Casino Royale, Quantum establishes itself as a more arcade-y variation on Rainbow Six, trading in the intellectual pleasures of careful movement and precise teamwork for hard-charging through varied locales, blasting away at swarms of enemies. The developers have made a few tweaks to the Rainbow Six design to help facilitate this, and they work like a charm. A sprint button keeps things moving quickly between gunfights, and a Quick-Time Event takedown feature solves the eternal "close combat" struggle that every FPS must deal with.

The most effective change is a Gears of War–style "rush to cover" feature. Whenever Bond is near a wall or column the player can press a button to automatically sprint towards it, and once there, the player can target other walls and columns and use the same button to automatically move from one area of safe cover to another. At first I worried that the game was doing a little too much of the work for me, but I quickly learned to appreciate having the guesswork taken out of finding cover. Too many games force players to spin around and flail on buttons as they try to determine which exact area the computer has determined can be hidden behind, so having an indicator onscreen flat out announcing the safe zone was a nice change of pace.

The level design is utterly competent, if a little on the repetitive side. Gameplay tends to proceed in an extremely linear fashion, full of narrow hallways that have to be rushed through in order to get to the more open-concept combat areas. There are a few well-made standouts, such as the chase through the Italian village at the opening, which honestly felt like I was moving naturally through a real area, as opposed to arbitrarily through a set course, as many later levels do.

The game falters a little when it moves into stealth sequences that don't quite jibe with the rest of the structure. A mini-map and the available third-person viewpoint keep these sequences from being too trying, but they still seem out of place, killing the flow dead whenever they appear. It's almost as if, in their naked determination to make the new GoldenEye, the developers thought they needed to put in sneaking levels just because their template featured them. 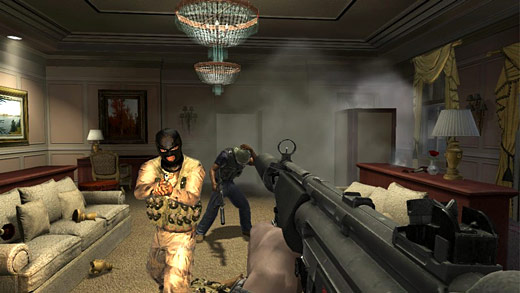 Quantum is much more successful when it comes to its multiplayer modes, which are some of the finest and most fun I've seen since GoldenEye. All of the standard kill, capture, and hold modes are present, but the really interesting variations are the two Bond based ones, both of which feature one player controlling Bond as he tries to escape a map or achieve an objective while the rest of the players control the opposition trying to stop him. It plays, depending on which side I was on, like either a co-op game of hide and seek, or a story level being played against the most devious and skilled AI ever devised.

From a story standpoint, though, the game is a complete mess, due mostly to the fact that, despite the title, it's not just a Quantum of Solace game, it's also a Casino Royale game. Apparently the developers felt there weren't enough action-friendly settings the Quantum film to fill out the game's length, so also included are a large number of levels based on the previous Daniel Craig Bond film.

This wouldn't be a problem if the levels were worked in logically as a prologue or a second, bonus, unlockable game after the first one is completed. No, the odd choice was made to have the player play their way through almost all of the Quantum storyline, then suddenly stop and play through the entire film Casino Royale before finally getting to the final level. Sure, this is a movie-based game, so it's not like the story is that vital, but the weird narrative detour so completely derails the flow of the game that by the time I actually arrived at the desert hotel I'd completely forgotten what was going on in the story.

While I doubt that Quantum of Solace is going to become a beloved classic the way GoldenEye did, it's a skilled first person shooter that easily takes the title of the best James Bond-themed FPS in a decade. More importantly, though, Quantum of Solace reinforces the idea that stealing game mechanics from Rainbow Six Vegas can lead to a great game. Hopefully Quantum will serve as an example to other developers, and soon we'll live in a cover mechanic-friendly world, where the days of awkwardly jinking back and forth from behind corners are little more than a distant memory.  Rating: 7.5 out of 10

Disclosures: This game was obtained via rental and reviewed on the Xbox 360. Approximately 6 hours of play was devoted to single-player modes (completed 1 times) and 10 hours of play to multiplayer modes.

Parents: According to the ESRB, this game contains Alcohol Reference, Mild Language, Violence. It's a pretty safe game for teens—there's no blood, so it's even less violent than the movie it's based on, with none of the sauciness.

Deaf & Hard of Hearing: You'll have the usual FPS problems with knowing when you're under fire until you're actually being shot. Luckily there's subtitles to give you mission information, and the stealth sequences offer a mini-map to help you out.