They're just not Great at this "Keeping Prisoners" Thing 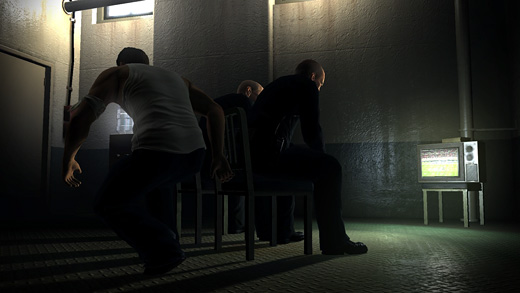 HIGH Desperately picking a lock while watching a guard creep closer on the split-screen.

LOW Missing a Y press because the game was asking me to jam on the B button.

WTF Couldn't they have figured some way of getting Fichtner in there?

In what has to be the tardiest television tie-in since Buffy the Vampire Slayer: Chaos Bleeds, Prison Break: The Conspiracy has just raced onto consoles, ready to answer questions about the first season of the show that absolutely no one asked. That may have come off a little glib and dismissive, but seriously, I can't imagine even the most die-hard fan of the series caring in the least about how C-Note got the PugnaC that he gave Michael Schofield, or where Peter Stormare got the shiv he used to stab that guy that one time, or how the worst-maintained prison in the continental united states had a rusted vent completely replaced within thirty-six hours of the damage being discovered. As a side-story to the series, The Conspiracy falls utterly flat—so it's lucky that it fares much better as a game than as a spin-off.

A hybrid stealth/boxing game, The Conspiracy tells the story of Tom Paxton, an Agent for "The Company" who was sent into prison along with Michael to make sure that Lincoln Burroughs's execution went off without a hitch. And then utterly failed at his job. Because, you know, the show had three more seasons. The story is such a complete disaster that even someone unfamiliar with the show's plot can see how poorly thought-out it is. Within ten minutes of the game starting the main character has found out about Michael's planned escape. At this point, literally all he would have to do to prevent it would be to mention this plan to nearly any guard. Michael would wind up in solitary, and then Lincoln would die on schedule. He doesn't, though—because the player's role in this drama is to do little more than preserve the show's timeline. An admirable goal, to be sure, but since it conflicts directly with what the character I'm controlling supposedly wants, it creates an internal conflict that the game's story never manages to overcome.

While the writing isn't anywhere near snuff, the developers actually did an excellent job of rounding up most of the original cast to reprise their roles—as well as crafting uncannily accurate depictions of those actors' faces. The vocal performances are largely excellent—Wentworth Miller seems to be phoning it in, although that may just be how he always sounds—and many recognizable locations from the show are recreated with enough accuracy to spark the nostalgia that I'm sure was the developers' goal. All of the familiarity in the world can't get the game over the hurdle it's presented with—that later seasons of the show would twist the plot in such a way that the first season absolutely could not have happened the way it did. The game tries gamely to fill all those plot holes, but alas, I don't know if even a great writer could have managed that.

The actual gameplay is far more successful at completing its goals. The central mechanic is a stealth system which asks us to believe that a 6+ foot man can creep noiselessly over concrete floors. Perhaps as a result of this game being intended for casual-gaming fans of the series, the sneaking is simplified to heretofore unseen levels of ease. Ducking behind cover makes Tom essentially invisible, and he has a dodge-from-cover-to-cover move that somehow prevents guards from seeing him lunge about. The action is strictly pass-fail, with any discovery by a guard resulting in instant fail. This isn't especially punitive to the player (there are checkpoints roughly every 90 seconds of gameplay), but the lack of escapes and tense hiding sequences robs the stealth sequences of any immediacy and a lot of their potential thrill. The one area the game really excels in is the artful use of split-screen to ratchet up the tension. Whenever Tom is presented with a lock that needs to be picked or a quick-hiding situation the action breaks into two sections: The one the player controls, and a third-person view of the guard closing in on his location. It's a basic device, but it works well to raise the blood pressure.

The fighting part of the game is also surprisingly fun in a bare-bones sort of way. At first it confused the hell out of me—the tutorial doesn't do a very good job of explaining things—but after a few fights I began to understand the rhythm of combat, and really started to enjoy the fighting sections. Especially because they were always brief and infrequent enough to keep from wearing out their welcomes. The one drawback is that the animation doesn't quite hold its end up and the camera placement isn't great, two problems which combine to make it appear as if punches are never really connecting—robbing the otherwise addictive timing-based combat of most of the visceral impact that it might have possessed. Still, there's definitely some fun to be had for fans of the show in the 2-player mode, which allows them to pit beloved characters against one another in any combination they like. While not the deepest multiplayer component, it was certainly a nice surprise from a game that could have gotten away without having one at all. And seeing T-Bag get beaten to a pulp never got old; for me, at least.

Prison Break: The Conspiracy had very clear goals: fill in some plot holes for fans of the series while providing gameplay accessible enough that anyone who watched the show could play the game. While I can't imagine there's anything about this story that needed to be told, I'll have to admit that, as one of those fans, it was fun to spend a little time around these characters, even if the plot didn't make a lick of sense (which, to be fair, was part of what I loved about the show). And if the gameplay does absolutely nothing new, or even slightly fresh, at least it managed to employ standard designs in a completely satisfactory fashion. I've got to say, after suffering through a few punishingly difficult titles as of late, spending a few hours relaxing in Fox River Penitentiary was definitely a pleasant experience. Rating: 5.0 out of 10.

Disclosures: This game was obtained via publisher and reviewed on the Xbox 360. Approximately 8 hours of play was devoted to single-player modes (completed 1 time) and 2 hours of play in multiplayer modes.

Parents: According to the ESRB, this game contains language, sexual themes, violence. The Teen rating is there for a reason, but don't think that the game is especially objectionable. It faithfully recreates Prison Break's vision of a prison environment almost completely lacking in profanity, and is considerably less violent than the show that spawned it. Hell, even T-Bag is far more oblique here about his threats of rape than he ever was on television.

Deaf & Hard of Hearing: The gameplay is extremely handicapped-friendly. In addition to universally subtitled dialogue the stealth sections offer a map to let you know where the guards are, even if you can't hear their mumbling or approaching footsteps. There's even an onscreen indicator to let you know when you're close to being spotted, making this one of the most Deaf & Hard of Hearing-accommodating titles I've seen in a while.