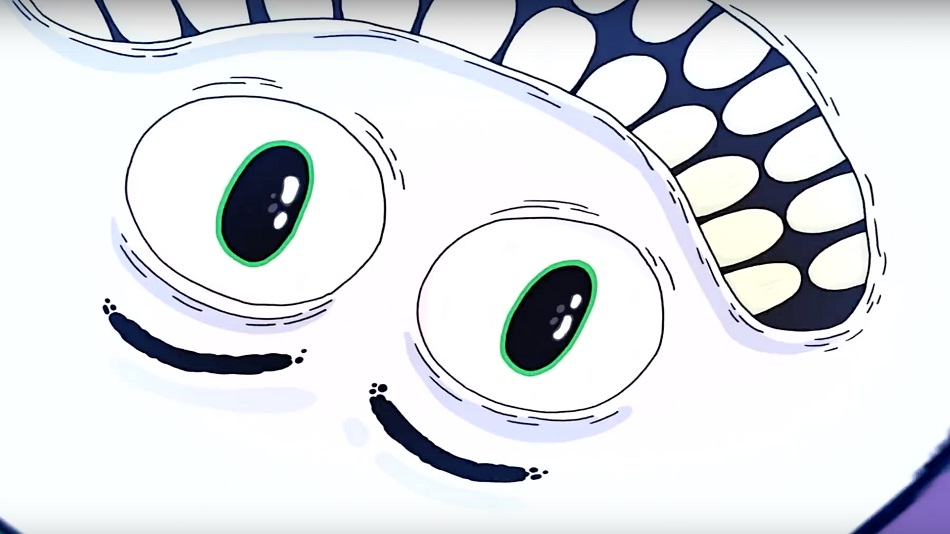 HIGH The Defender of the Crown tribute level.

LOW Trying to grasp how the climbing mechanics are meant to function.

WTF I failed to find any pool sharks.

Even when it’s not functional – which is more often than anyone would like – Pool Panic impresses with a seemingly endless well of creativity. This is a game with dozens of ideas on offer, and while some of them are outright terrible, the sheer volume of them is magical to behold.

As a puzzle adventure that takes players into a world of animated billiard balls, Pool Panic starts simply enough. It’s a billiards “simulation” with three big twists — two added to make things more casual, and one that baffles and infuriates. 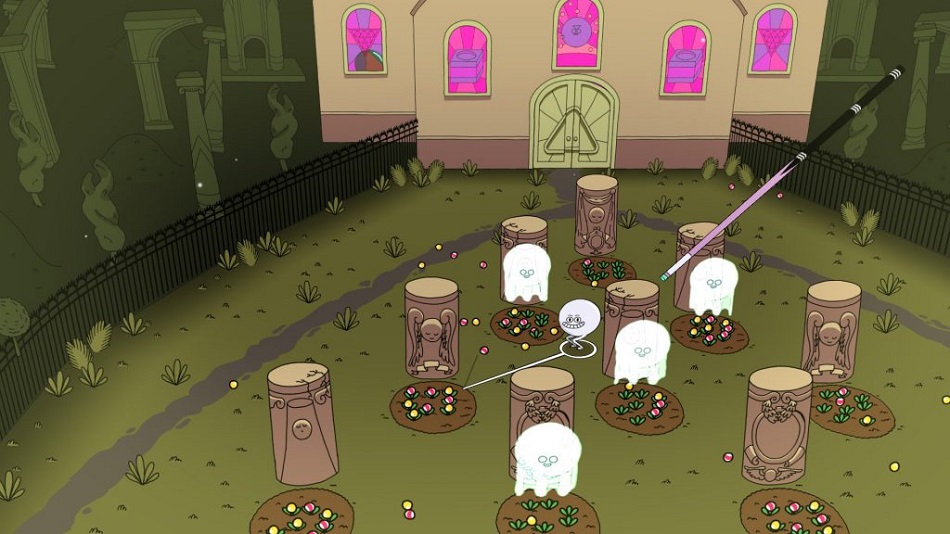 The casual innovations are the core of gameplay. First, instead of using a pool cue or cursor like more traditional tabletop sims, in Pool Panic the player’s cue ball can walk around the field to find the best angle for a perfect shot and then ‘shoots’ with either soft or hard power, rather than messing around with a power meter and ball spin. The second change is that the game doesn’t worry about physics or realism — as long as the player manages to shoot a ball into the same basic space as the target (usually a hole) it will sink in. Those concessions are necessary because of the third big alteration – the point of view.

Rather than the traditional top-down view found in billiards, Pool Panic wants to showcase its grotesque balls with faces on them, and it does so by keeping the camera to the side and looking slightly down in a kind of 2.5D angle normally reserved for beat-’em-up games. This perspective makes it surprisingly difficult to get a sense of how balls will interact when struck. While players can rely on visible aiming lines to make sure their shot will hit (and can even ‘lock on’ to their targeted ball), secondary strikes are extremely difficult to calculate and execute. This forces the player to rely on the aiming lines to tell them they’re going to sink a ball, rather than relying on skill or instinct.

If sinking balls can be a little rough, it’s more than made up for by the variety of puzzles that Pool Panic features, and I was shocked to see the insane amount of game types here. There are zombies to kill, ghosts to summon and banish, mini-golf to play, roller-coasters to ride, fish to feed, banks to rob… it just goes on and on. Every time I thought the formula couldn’t get any more insane, I would find myself in a jousting match atop a billiard horse or chasing down billiard cats in a field of wheat. Some of the modes don’t work (the rock-climbing levels are dire) but when this much pasta is thrown at a wall, some can be forgiven for falling off. 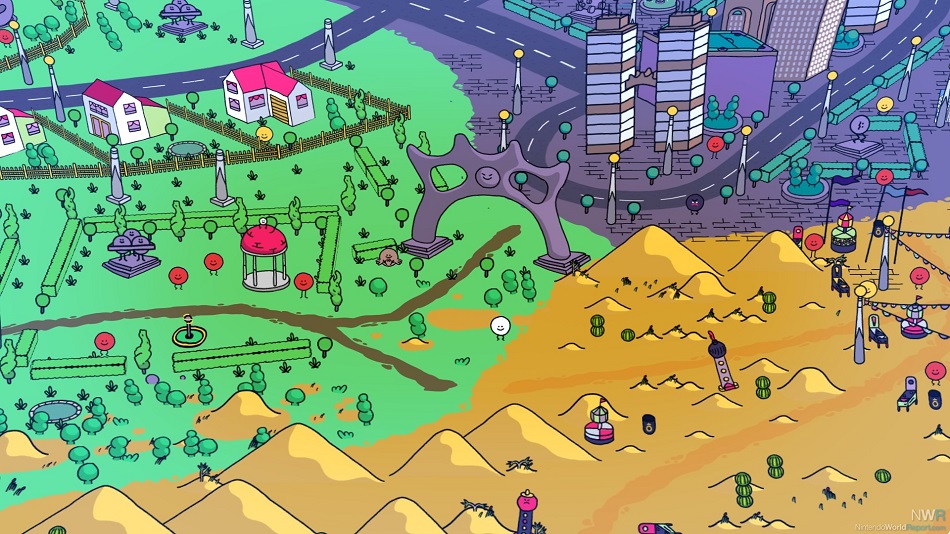 What’s less forgivable is the lack of a world map. Pool Panic takes place in a huge, interconnected world full of strange biomes that can gradually be unlocked by completing key puzzles. The problem is that the player can see only a tiny fraction of the overworld at a time, and it’s difficult to keep track of which directions need to be explored and which pathways need clearing. I completed something like 75% of the levels and then ran into a wall – there were locations I couldn’t unlock, and I had no idea how to do so. I’m sure I missed a puzzle or two that would have allowed me to access the last few areas, but when half an hour of wandering around and fruitlessly looking for things to do didn’t lead to any relief, I decided to pull the plug.

With puzzles that hit more often than they miss and an art style that had me eagerly anticipating how they’d render each new setting and creature, Pool Panic is a brilliantly strange experience that’s worth playing just to be able to say that one waded into its madness and came back whole. If only it offered a slightly clearer structure and a little bit of guidance, it would be more than just a fascinating experiment in seeing how far the concept of playing pool can be mangled while still retaining its basic appeal. Rating: 6.5 out of 10

Disclosures: This game is developed by Rekim and published by Adult Swim Games. It is currently available on PC and Switch. This copy of the game was obtained via publisher and reviewed on the PC. Approximately 6 hours of play were devoted to the single-player mode, and the game was not completed. 1 hour of play was spent in multiplayer modes.

Parents: At the time of review, no ratings information was available from the ESRB, but it contains Crude Humour and Cartoon Violence. I can’t imagine anyone being traumatized by this one. While the main character spends his time assaulting other billiard balls – ruining their day by knocking them into the holes that litter each area – it’s all so incredibly broad as to be completely harmless. There are a few scenes where the player has to knock portable toilets to complete objectives and trick-shot challenges occur inside bars full of drunken balls, but beyond that it’s fairly harmless.

Deaf & Hard of Hearing Gamers: I played the game without audio most of the time, and encountered zero difficulties. The text cannot be resized, and the only text in the entire game is pictured below. It is fully accessible. 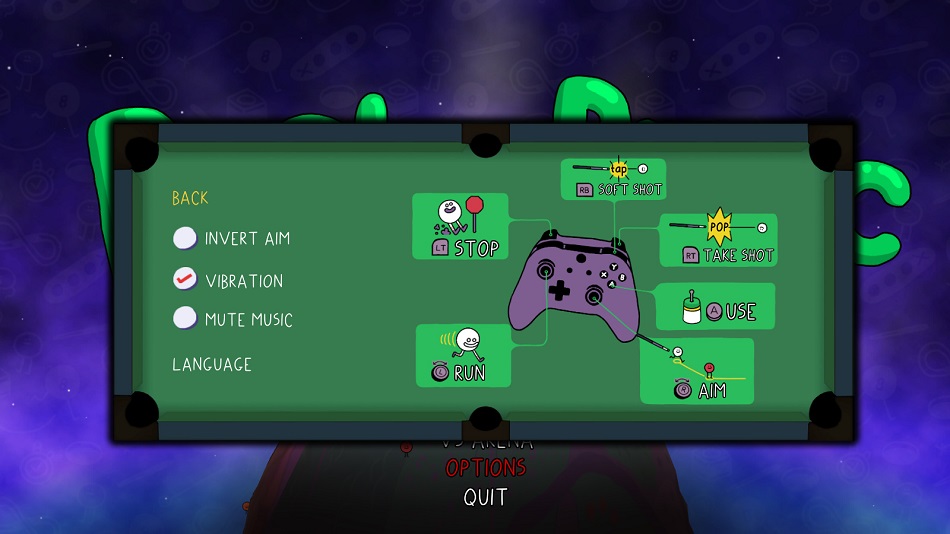