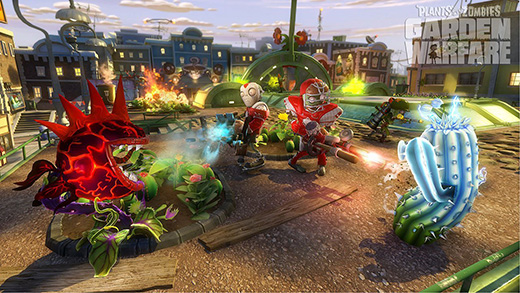 HIGH Planting my sunflower and wiping out three enemies in a single beam of light.

LOW Trying to stop any boss in the single-player mode.

WTF Oh, so Disco Zombie is back? I was kind of hoping that it's been long enough that… no, I get it.

seems like a Venn diagram in video game form, created only because EA suspected that there was an overlap between people who enjoyed cartoony iPad games and those who like team-based online shooters. While I can't speak to its market viability, in my dozen hours with PvZ:GW I discovered a game whose core mechanics couldn't overcome its complete inability to figure out what it wants to be.

PvZ takes its team-based nature to heart, pitting the titular forces against each other in three different gameplay modes—two adversarial, one co-operative. The first is a straight deathmatch, with various classes of plant and zombie fighting across a surprisingly small number of maps.

The second is control-point gameplay, which offers a breath of fresh air from a level design standpoint. As the mode begins, the Zombies are in a graveyard, tasked with corrupting a garden by holding it for a set amount of time. An interesting dynamic emerges when that garden is captured—it becomes the Zombies' new spawn point, and the plants have to retreat to their next garden until the fight is eventually taken right to the plants' home base. Sadly, this mode offers only three different environments, which is spare, even for a budget title.

The final mode, 'Garden Ops', is the game's one sop to the single player/co-op market, allowing a team of plants to choose and reinforce a garden before playing a ten-wave game of base defense around it. This mode is PvZ:GW's most obvious attempt to provide something analogous to classic Plants vs Zombies gameplay, but it's hamstrung by how it limits player engagement.

Basically, Garden Ops is unplayable for lone gamers, since the difficulty doesn't noticeably scale up or down based on the number of players. The real issue, however, is that the enemy and level design force players into taking on a specific role. Four players can defend the garden simultaneously, and the game would really prefer if each of them assumed one of the four classes of plants, thank you very much. Without a Peashooter for raw combat, a Sunflower to heal, a Chomper to kill enemy Heroes, and a Cactus to set up defenses, things have a habit of going south in a hurry. For being inspired by a game with a heavy element of player choice, it's disappointing to see things corralled so obviously.

With these flaws acknowledged, the greatest strength PvZ:GW has is the pleasantly asymmetrical nature of the competing teams. Rather than giving the four different zombie classes abilities that mirror their plant counterparts, the developers went the extra mile and created four distinct characters who provide distinct gameplay experiences.

The zombies still have a healer, for example, but where the Plants' Sunflower is designed to root in place and fight from long distances, the Zombies' Scientist teleports around the map and blasts enemies with a shotgun. Switching teams means learning an entirely different set of controls and strategies, which helps to add depth and replayability to the combat, and invites players to master all of the different styles of combat.

On the other hand, PvZ:GW's greatest weakness is the ill-conceived metagame through which character unlocking is handled.

While all eight characters are available at the outset, each of the four plants and zombies have a wide variety of alternate versions. The problem is that these alts aren't unlocked by gameplay or purchase through in-game currency. No, the coins players earn by playing levels are used to purchase packs of 'trading cards' which may contain pieces of a random extra character. This randomness robs players of choice in what they want to unlock—enjoy playing as a Zombie Footsoldier and want to try out some of the other versions? Too bad—even the card pack that's guaranteed to offer zombie character pieces only offers a 25% chance of having the desired piece. Worse, the most expensive pack doesn't even allow players to specify whether they want a plant or a zombie.

I have no idea why they went with this model rather than letting players unlock things through gameplay, or at least spending their coins in the ways they want—there's still customization items and consumables that could have been randomly drawn from packs without frustrating players as badly as this does. This is the kind of hostility to player time usually found in free-to-play games, but since there's an option to buy in-game currency, players are forced to grind if they want to see even a fraction of what the game has to offer.

With a variety of interesting characters and well-balanced gameplay, Plants vs Zombies: Garden Warfare

should have been a perfect entry-level team-based FPS, letting younger and more casual audiences learn about the fun of meeting others online and shooting them in the face. Sadly, the frustrating unlock system puts a damper on that, and it never manages to make players feel rewarded for playing. There are worse FPSs out there, but it's just too small and inaccessible to ever be the crossover success that EA is clearly hoping for. Rating: 7.5 out of 10


Disclosures: This game was obtained via publisher and reviewed on the XBONE. Approximately 15 hours of play were devoted to multiplayer modes, during which time 2 characters were unlocked. Neither was one I was interested in playing as.

Parents: According to the ESRB, this game contains animated blood, crude humor, fantasy violence. There's really nothing substantive to object to here. If you feel like your children are old enough to see zombies on a TV screen, they're certainly old enough for the kind of things they'll be seeing in the game.

Deaf & Hard of Hearing: As with most FPSs, you're going to have a little trouble with this one—there are onscreen indicators for angles of attack origination, but you'll be missing out on the key audio cues that will let you know if there's a zombie already blasting away just around the corner. Yes, there are a variety of ways that enemies can end up on your mini-map, but none of them are constant, nor are they reliably long-lasting.