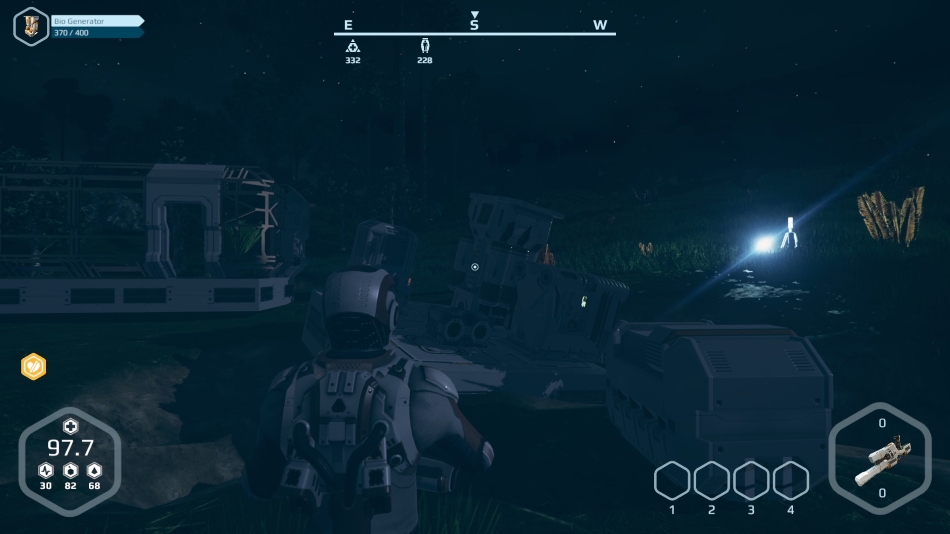 While I can’t say for sure what’s going on inside the developers’ heads, it’s impossible to look at Planet Nomads‘ aesthetic and not come away with the impression that – at least on some level, the game exists as a way to make good on No Man’s Sky‘s promises. It’s a game matching NMS‘ 70s sci-fi look but keeping the scope to a single planet. Will setting more modest goals lead to a better result?

Starting as a survivor of some unexplained space cataclysm, the player finds themselves in a survival pod dropped randomly onto an expansive world. From there things take the shape of a traditional crafting survival narrative. Use a multitool laser to gather resources, use the resources to build a base, patiently wait for the developer to add a narrative or objectives at some point in the future.

It’s certainly a good-looking world to explore, with striking modular architecture to build with, and pieces of technology defined by smooth lines and intricate detailing. The world’s flora is also nicely designed, with colourful plants that catch the eye even from a distance, letting players easily spot harvesting points without cluttering up the screen with extra HUD elements. The fauna are less impressive – the planet’s inhabitants have extremely limited animation, and seem to float across the terrain, which, to be fair, No Man’s Sky struggled with as well.

The game’s biggest hurdle at the moment is the lack of explanation of its crafting system. Players have to build power stations to activate 3D printers to construct the pieces that they’ll use to start building their base. The problem comes in with how random and counterintuitive the placement of resources are in the game’s world. I spent half an hour mining the rocky outcroppings and rolling hills that dotted my starting island, and came up with next to nothing. Then I spent an hour wandering around the wilderness and stumbled across a series of identical rounded stones which, when mined, offered a random selection of much-needed minerals. There’s no logic to the distribution of these stones, which makes building up a decent stock somewhat frustrating. 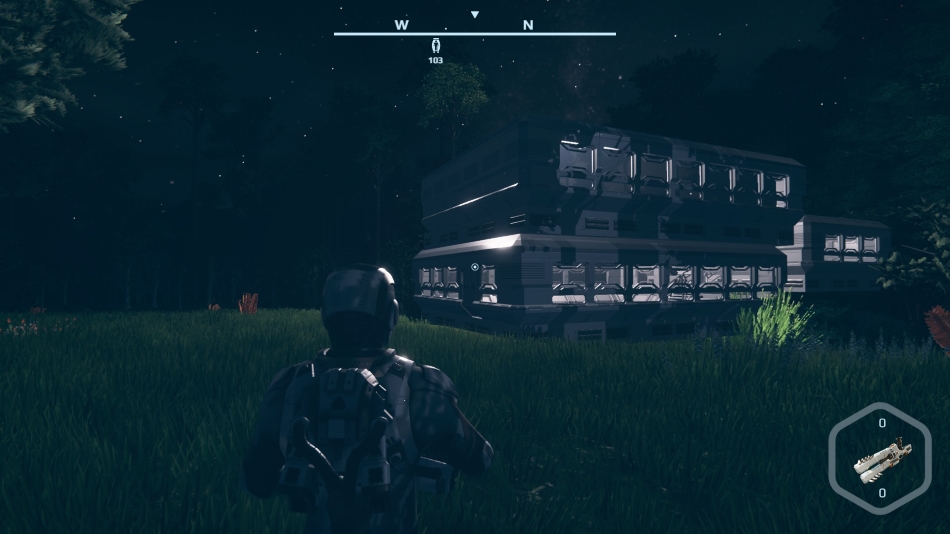 Also annoying is the lack of communication when it comes to tech trees. It’s clear that building certain items will unlock other items for development, but it’s completely unclear what the prerequisites are, making any kind of directed progression impossible. I found some satisfaction in just putting things together to fill up a checklist, but having no obvious way to unlock the upgrades that interested me got frustrating fast. Players start the game with a shockingly small inventory in their environment suit, which is covered in locked slots that must be opened using some method that the game doesn’t bother to explain. And god help anyone trying to put together a weapon to defend themselves against the rock-throwing beasts that wander the forests.

I’m sure that as the game continues its journey through early access the developers will make the crafting process much more user-friendly – there are seeds of good ideas here – for example, various devices can be hooked together to share inventories and minimize the amount of time players have to schlep back and forth between crafting stations just to build a simple suit upgrade.

Right now Planet Nomads is a visually attractive but otherwise bare-bones survival crafting title, recommended mostly to fans of the genre looking for something beautiful that focuses on the single-player experience, and are willing to put up with a lot of trial-and-error gameplay as they learn the undefined rules.