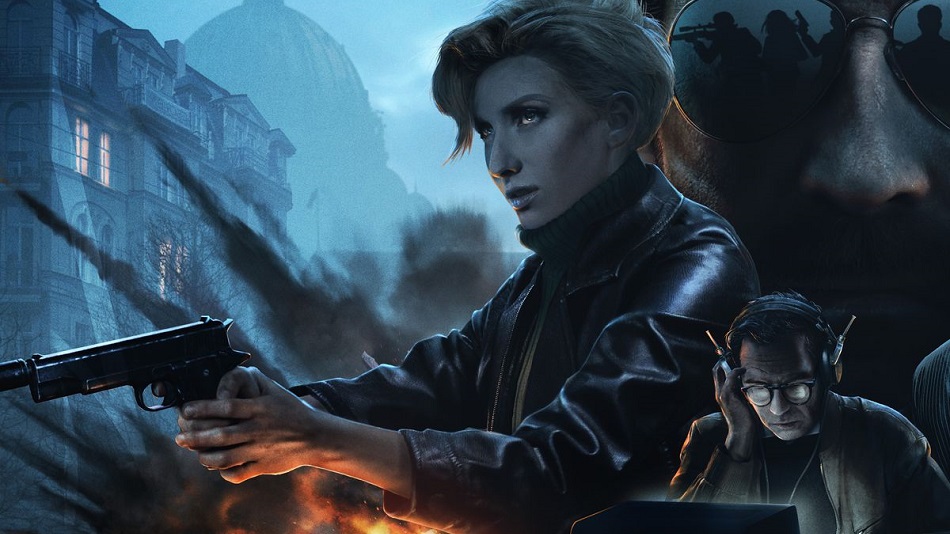 During the ’80s, America was hobbled by its failure in (and the backlash subsequent to) Vietnam, the USSR was nearly bankrupt and struggling to hold Afghanistan, an embassy in Beirut was bombed and Chernobyl melted down. Given these real-world circumstances and the climate at the time, it should have been obvious that this would be the perfect setting for an espionage videogame, so I felt a little foolish when I discovered that Phantom Doctrine was set in 1983, rather than the de rigeur ’60s milieu I’d come to expect from cold war narratives.

An XCOM clone set in the world of international espionage, Phantom Doctrine tells the story of a deep-cover cell of intelligence officers. The player can choose from the CIA, KGB, or Mossad at the outset, and they’ll uncover an international conspiracy with tendrils in the world’s governments. Quickly disavowed and branded as traitors, it’s up to this independent cabal to scour the globe for leads and take the fight to the enemy through a series of randomly-generated tactical missions which take place on grid-based 3D maps, using classic turn-based combat gameplay.

Like its inspiration, Phantom Doctrine asks the player to spend time observing flashpoints on a world map before moving troops around combat zones. They’ve done a fantastic job of making the base-building and map investigation feel spy-themed, as they watch pegs on a simple world map light up to represent crisis alerts, and loop string around thumbtacks to figure out connections between agents and organizations. Players start out just working in the middle east, but as the plot (and the team’s resources) expand, eventually they’ll be running ops around the entire northern hemisphere.

Alerts pop up on the world map, and the player has to dispatch agents to check them out – they can be enemy ops, informers looking to spill information, or even just false alarms, but there’s no way to find out without actually sending field operatives. At first, the possible responses are limited – the only real option is to start a tactical mission to catch or kill the enemy agent. As the game goes on and the player’s base is upgraded, they’ll have a wide variety of choices at their disposal — everything from following enemy agents back to their hideout, all the way up to brainwashing members of the conspiracy to manipulate them into destroying their own organization from the inside. 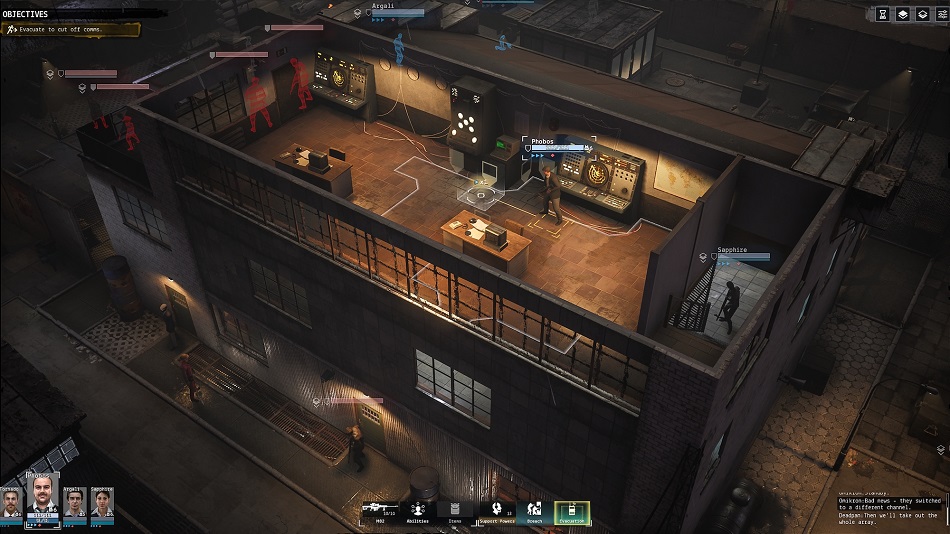 The tactical missions are beautifully designed, and broken up into two phases – the first is infiltration, in which team members sneak around the map, stealing information or kidnapping agents. The second is combat, when everything has gone terribly wrong, and the characters have to shoot their way out. Phantom Doctrine almost never treats combat as an inevitability – other than a few plot-mandated fights, all of the missions can be completed in infiltration mode, should the player plan carefully enough and use their team’s skills effectively.

Players considering going in with guns blazing should know that there’s no such thing as ‘winning’ a gunfight in PD – since the player is in enemy territory, there are a limitless number of bad guys available once an alert sounds. However, if a fight does break out, PD offers a fleshed-out system with no randomness — every shot will hit unless a character has enough ‘awareness’ to dodge the bullet.

Whether sneaking or shooting, these tactical engagements are brilliantly constructed. The only problem is a slight dearth of maps. Other than the specialized areas that exist for plot-based missions, every random tactical battle will take place on one of a dozen maps, with the locations ranging from office buildings and factories to train yards and restaurants. The developers do their best to mix things up – blueprints stay the same, but room contents and enemy placements are frequently randomized — but it’s not enough to defeat the overfamiliarity players will feel during their fourth trip back to the same motel.

The intelligence-gathering mechanic has a similar problem. It starts out as a compelling minigame in which the player has a virtual corkboard with a codename at the center. They have to read various files and draw connections between locations and people until they can link the codename to a person, place, or organization. It’s quite enthralling for the first few hours, but gradually two big problems pop up. The first is, again, a shortage of unique files. In the second half of my playthrough, I found myself seeing a lot of repeats. They’re well-written, but it undercuts the verisimilitude to see the same events referenced over and over again with new codenames swapped in. 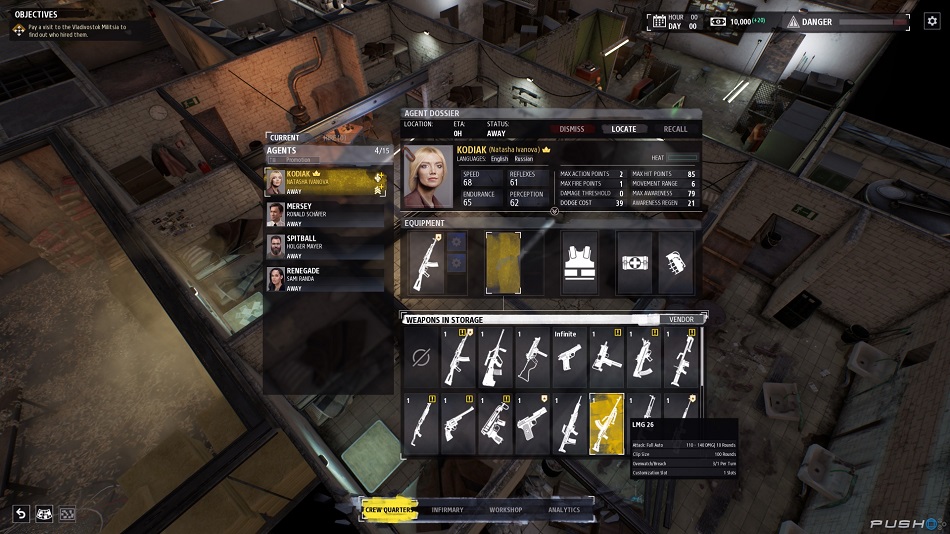 The second, much more serious problem is that the player never builds up a database of information. Once I’d established that – for example – “sulfur springs” is a codename used to refer to Vienna, shouldn’t that connection automatically be made on all subsequent boards? Sadly it isn’t, which forces the player to start from scratch with each new file. If the developers had let the player benefit from the work they’d already done and made filecracking easier as the story went on, it would have felt like the player was gradually developing their own powerful intelligence network instead of doing busywork to unlock the next mission.

Getting back to the setting, Phantom Doctrine squeezes absolutely all of the juice it can out of 1983. From the arrest of Klaus Barbie to the invasion of Grenada, the developers have built a conspiracy board peppered with real-world events where everything is connected to a sinister group perched in the middle. The decision to so closely adhere to real-world events is a bold choice — working in historical facts adds weight to the otherwise fantastical plot. Although it’s outlandish for the time period in which the game is set, the villains’ grand design ends up feeling incredibly timely for 2018 in ways the developers couldn’t have imagined when they started out.

Anyone looking for high-quality turn-based strategy that eschews the aliens, giant robots, and dragons that generally populate the genre will find Phantom Doctrine to be just the thing they’ve been looking for. Rating: 8.5 out of 10

Disclosures: This game is developed by Creative Forge Games and published by Good Shepherd Entertainment. It is currently available on PC, PS4, and XBO. This copy of the game was obtained via publisher and reviewed on the PS4 Pro. Approximately 40 hours of play were devoted to the single-player mode, and the game was completed. 2 hours of play were spent in multiplayer modes.

Parents: According to the ESRB, this game is rated M and contains Violence, Blood, Drug Reference, Strong Language, and Use of Tobacco. It’s a cold-eyed look at the world of international espionage. While there are non-lethal options in some situations, the player is going to be shooting a lot of people in the head, and they won’t all be bad guys. An early mission found my team betrayed by their own government, and suddenly my CIA agents were engaged in a battle to the death with Navy SEALs. The drug references aren’t just about the various addicts who turn up in the game, either – the player will have to use various brainwashing techniques to mold the minds of opposing agents, and there’s never a moment’s pause given to the morality of all of it. This is a bleak world, people, take the M seriously.

Deaf & Hard of Hearing Gamers: I played most of the game with no audio, and encountered no issues. There are subtitles for all dialogue, but the text sizes cannot be increased. It’s fully accessible. 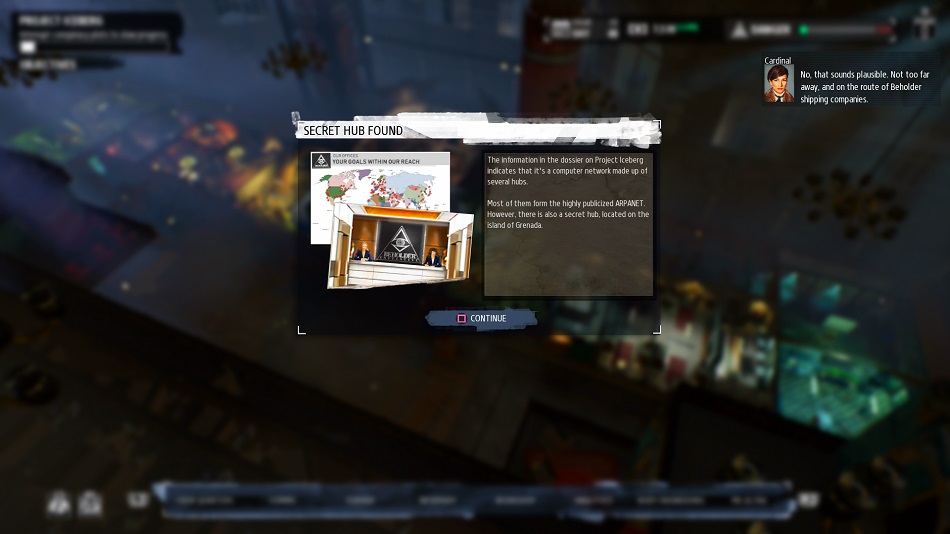 Remappable Controls: No, this game’s controls are not remappable. There is no control diagram. The player uses controller thumbsticks to select portions of the screen, and face buttons to select or cancel actions, with triggers and the D-pad assigned to quick-select items, abilities, and targets. I can only imagine that this is all considerably more convenient in the PC version, where people can just use the mouse and keyboard that the game was clearly designed around.

Definitely sounds like my jam (I’ll also be keeping an eye on Jagged Alliance: Rage later this year). The only thing though, is the unlimited enemies once a facility is on alert… Don’t like the sound of that in all honesty.