A Game That Will Live in Infamy 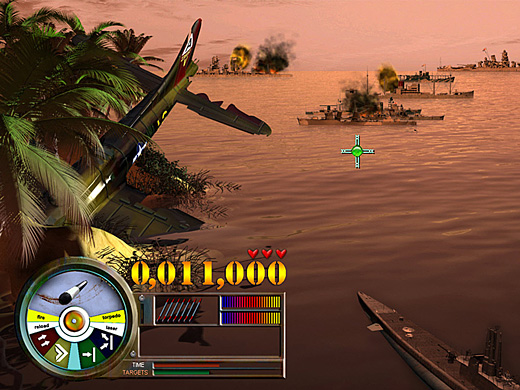 HIGH When the game didn't prevent me from quitting it.

LOW My crippling finger pain after an hour of playing.

There was a venetian blind simulator for the Atari 2600. A demo created as part of a war of wills between Atari and Activision, it allowed players to raise and lower a set of blinds, revealing a sunset through the window behind them. When Microsoft released its "game room" front end which allowed modern gamers to try out classic arcade and console titles, someone decided that opening and closing venetian blinds over and over again was worth three American dollars, meaning that someone decided to try to charge real money for something that no sane person would accept as a gift.

Another example of this phenomenon is Pearl Harbor: Fire on the Water, an inexcusably poor shooting gallery game. Taking on the role of an American submarine commander, the player is tasked with blowing up an endless procession of Japanese ships in the aftermath of the famous sneak attack. The player is aided in their attempt to avenge the attack by a series of fantastical powerups and the fact that the various battleships and cruisers never shoot back.

A shooting gallery in the most basic sense, the game consists of a series of levels in which enemy ships move horizontally along flat planes, while the player fires slow-moving torpedoes from the bottom of the screen, attempting to intercept the targets. The setup follows the most basic rules of game construction —the further away targets are the more points their destruction is worth—with the only notable development being that ships lose a little speed each time they're struck, which makes hitting point goals slightly easier than it otherwise would have been.

Easier is a relative term, of course, as the game has just two modes—ridiculously simple and far too difficult. Out of the 30-odd levels I played, I was able to conquer the majority of them by simply picking an angle and clicking over and over again, letting the destroyers and cargo ships wander blindly into the path of my weaponry. A few levels require the player to hit a floating buoy that activates a power-up, but other than that, it's a one-button game, and not in a brilliantly minimalist Canabalt kind of way. The only time I felt challenged were the absurdly difficult "limited ammo" levels, in which I was asked to make sure that every single shot hit its target. The penalty for a single miss? Mission failed.

Adding insult to injury, this supposedly "casual" game has the gall to assign the player a set number of "lives"—after failing three times, I was kicked back to the last checkpoint, nine levels earlier. It was at this point—motivated largely by the stabbing index finger pain that comes from an hour of continuous clicking—that I decided I'd seen all of Pearl Harbor that I'd ever need to.

My recent fascination with Hidden Object Games had me wondering if I'd been too quick to judge other "casual" titles—is it possible that there were other games being aimed at the mass market that had similar unfathomed depths? In a single felled swoop, Pearl Harbor cured me of these idle musings. No, I didn't finish the game, so this can't be considered a definitive Pearl Harbor: Fire on the Water review.  Perhaps the game gets far better somewhere between levels 41 and 100. Maybe aliens show up, explaining the laser-equipped sub. I'll never know—but considering that those levels were presumably crafted by the people responsible for the first half of the game, I profoundly don't want to. Rating: 1.0 out of 10.


Disclosures: This game was obtained via publisher and reviewed on the PC. Approximately 2 hours of play was devoted to single-player modes (and not completed).

Parents: Although not rated by the ESRB, this game contains sci-fi violence. While the game may be themed around a particularly traumatizing moment in American history, it's so bloodless and removed from reality that it's hard to be offended. Boats float along, there are bloodless explosions, and then they sink—at most, this would be rated E10+

Deaf & Hard of Hearing: There are no vital audio cues or dialogue. So you can play it to your heart's content. Although I can't think of any reason you would.