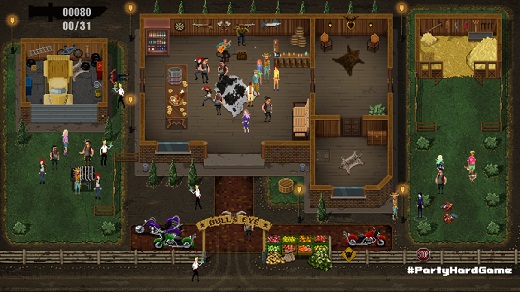 HIGH Seeing a panda maul someone brought me to the verge of laughter.

LOW Everything. It's all terrible.

Party Hard is little more than a combination of tropes, and it seems as though it was produced quickly for some kind of game jam and then fleshed out and released on Steam because why not do that? Well, I'll tell you why not—because asking people to pay money for this kind of half-baked garbage is absurd.

Party Hard tells the story of a deranged psycho who travels America killing people because they won't turn the music down at their parties. The narrative unfolds via the most overused of all framing devices: the police interrogation. In this case, the man being interviewed is an officer who's become obsessed with the case after his daughter is murdered at one of the parties. I'm sure there's more to the story, like the cop is secretly the killer or something, but finding that out would require either finishing the game myself or researching it online, neither of which I was willing to do.

Just to be clear, Party Hard's premise isn't terrible—after all, even the miserable Naughty Bear proved that there was entertainment to be had in role-playing as a Jason or Michael Myers, but Party Hard is so poorly designed and contains such frustration that it absolutely stomps out its potential.

Each of the game's levels is set on a single screen that the psycho is free to navigate, although there are frequently locked doors with unclear methods for opening them, and omnipresent bouncers who will beat up the psycho and arrest him before any murdering has gone on.

The goal of the game is to kill every person on screen. Not every person they can manage before the police arrive, or as many as possible before the partygoers flee, but everybody, because nobody ever runs away no matter how many people get stabbed to death in front of them. This demand for 100% completion is just one of the things that makes Party Hard such an incredibly tedious experience.

There are basically two ways to play. The first involves using items and traps scattered around to kill large groups of people, waiting until the police clear the corpses, and then moving on to the next group. Being forced to spend time waiting between murders is incredibly dull, but taking even slight risks will result in the psycho being noticed. There are a few ways to defeat cops or temporarily escape them, but if the player is seen twice, it's game over. The safer way to play is to wait until 1 to 3 people wander off from the crowd, stab them, and walk away. Then, repeat this same action for 15 to 20 minutes until everybody's dead. Neither style offers any possibility for enjoyment, but the second is less painful because it doesn't force numerous replays the way failed experimentation does.

Party Hard is not a game that rewards players who take chances or attempt to learn the layout of levels, since the developers randomize the stages after each failure. Trap elements, items, and victim gathering points change every time. There's no value in practicing techniques when there's no guarantee players will have a chance to use them.

Putting the questionable choice to randomize aside, the strange 2.5D point of view ensures that it's never clear what any character's sightline is, making it nearly impossible to know when it's safe to stab someone. This is the most important element the developers needed to get right for a workable stealth experience, and their inability to manage even that says volumes about how much care was put into this game.

After I'd installed Party Hard I checked the patch notes for its latest revision. In the notes, the developers make jokes about how shoddy their game is, and express a lack of interest in rebalancing the difficulty spike in the terrible beach party level. Apparently they're amused by the fact that they have a level so bad that it causes people to quit their game permanently.

I suppose I shouldn't have begrudged the developers this little joke as I uninstalled their game from my computer. If they got a tiny bit of schadenfreude from my misery, it's surely the only kind of enjoyment this game has ever provided. Rating: 2 out of 10


Disclosures: This game was obtained via publisher and reviewed on the PC. Approximately 4 hours of play was devoted to single-player modes, and the game was not completed.

Parents: This game was not rated by the ESRB, but contains blood and gore, alcohol use, drug use, intense violence. Don't let your children play this under any circumstances beyond being terrible. It's about a psychopath stabbing people to death and those people are often smoking, drinking and doing drugs when it happens. There is no excuse for letting your children near this game.

Deaf & Hard of Hearing: There are no audio cues, so you won't have any trouble playing this game, although for the life of me I can't imagine why you ever would.

Sounds like I was right to pass on this game. Just from the promos it looked like it was trying too hard to be “quirky” without having any real substance or enjoyable gameplay.