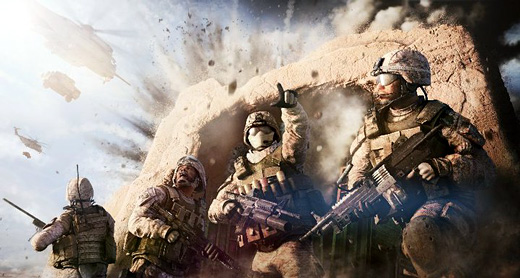 HIGH Calling in an airstrike on a wave of rushing PLA and watching them scatter.

LOW Watching my team standing around, unable to respond to a rocket attack.

WTF The 50-cal doesn't work on helicopters? That's what it's for!

Okay, I've got to ask—is this a satire? As I worked my way through the Tajikistan Mountains, battling first rebels with AK-47s and later the People's Liberation Army, I bore witness to a depiction of modern warfare and geopolitical gamesmanship that is either utterly myopic American propaganda or a brilliant exposé of the tortured logic and nonsensical rationales the United States government uses to justify its strategic interests in Asia. Did I just play a game about how people are asked to do horrible things by teaching them to value nothing but the life of the person standing next of them, or is it a game about how badass it is to be a US Marine? I suspect that there might be something more going on in this game than meets the eye, but except for a squad leader who's unusually fond of referencing Charlie and the Chocolate Factory, there are no real clues as to what it might be.

Set, like its predecessor Dragon Rising, during a multi-day border conflict with the Chinese government, Operation Flashpoint: Red River

replaces that game's relatively clear stakes—an oil-rich island that two nations were fighting over—with a miasma of uncertainty and rationalization. At the outset the player is informed that their Marine unit is being deployed to Tajikistan because the insurgents that had so bedeviled them in Afghanistan and Pakistan had fled there for safety. It seems like a reasonable enough justification for US involvement—unless you're overly concerned about the Tajik's sovereign borders—but things get muddled almost immediately. The Marines in the players company will often gloat gleefully about blowing away "Tajis" when we're supposedly fighting extranational insurgents. It's possible that this is just intended as an indictment of the casual racism of American servicemen, and the fact that they're not overly concerned about who they're actually shooting. Even if that's the intent of the developers, the impression created is that America is less mopping up the last remnants of the Taliban and Al Qaeda, and more invading a country that it had its eyes on for other reasons.

That the game's ten single player missions do such a good job of putting players in the shoes of an average soldier on the ground only increases my suspicion that there's some kind of a satirical point being made. At the beginning of each mission the player is given an overview of the company's goals and then asked to focus, with laser-like intensity, on the incredibly small things they can do to help facilitate them. The tone of those missions changes to a vast degree halfway through the game. In the first section a massively overpowered US war machine is coming down on some robed and bearded rural people like the hand of God—and in the second the Marines have been transformed into the underdog as they're swamped by the awesome numerical superiority of the Chinese army.

It's certainly an interesting dramatic reversal, having the player going from kicking the plucky underdog to being the plucky underdog, and definitely makes for an interestingly broad variety of mission objectives. Yet the game is a maddeningly disinterested at considering the implications of this mid-plot twist in power dynamic. In the first half of the game players are asked to be vigilant in protecting their all-important convoys from ambushes in transit. In the second half, players are asked to set up those same ambushes, and make sure every member of a supply convoy dies. Maddeningly, no one in the game ever pauses to consider the implications of these actions. 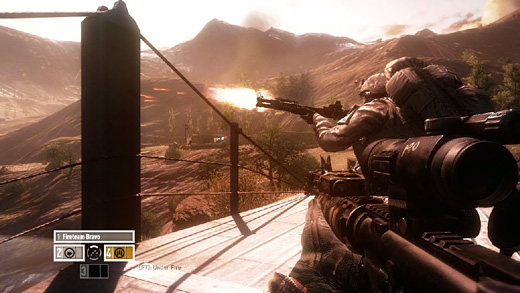 While I think the game's sociocultural implications are far more interesting to consider, it's also important to consider how Red River works, or doesn't, as a game. All of the first person shooter content is exceptionally good. Players looking for realistic gunplay and sniping will enjoy using their iron sights and having to compensate for bullet drop. The modified one hit kill rule is largely in effect, with enemies dropping when they're hit, while the player commences bleeding to death after being shot and has just a few moments to find cover and patch themselves up so that they can continue playing. There's actually an interesting gameplay device built around these injuries, because the PLA enemies can be non-fatally wounded as well, which leads to their screams drawing Chinese medics out of cover to give aid to their fallen comrades. At which point they can be picked off by a rifleman with a telescopic scope. In a game already full of questionable ethical content, is it going too far that it gives gamers the option of role-playing as the sniper from Full Metal Jacket?

While the mission design and player controls are quite good, the game stumbles a little when it comes to partner AI. Perhaps the developers were assuming that everyone would take advantage of the game's co-op friendly structure—every mission is played with a four-man fire team and it's easy to invite friends to fill the slots that would normally played by the computer. This is an important feature to utilize, since the AI teammates are flat-out terrible at following orders. They often get hung up on the landscape, they won't shoot when ordered to, and if I simply let them follow me around their reaction time to incoming threats is terrible. The less said about the game's vehicles, the better—magically bulletproof helicopters, vehicle AI that doesn't react at all to the truck or a PC in front of it being blown to smithereens, a nearly game breaking glitch that required me to walk for four minutes to find a weapon capable of destroying the only remaining enemy vehicle that was keeping me from completing a mission. Every vehicle in the game is a flat-out disaster.

The game's icky politics are set aside in the multiplayer modes, which are a surprisingly fun if oddly sparse addition to the game. A series of co-op engagements with a variety of objectives, groups of players are asked to clear areas of Tajik insurgents, rescue crashed helicopter pilots, escort a convoy, or protect a fixed location from wave after wave of Chinese troops. These bite sized action sequences are always entertaining and randomized enough to be frequently replayable but, inexplicably, only two maps are offered for each mode. This is especially troubling because while the game does have a few visually striking locales: a ruined fortress, a town constructed from repurposed shipping containers, and an abandoned Soviet Observatory, none of them make an appearance in any of the multiplayer modes. Perhaps the good stuff is being held back for DLC, but as of right now these "fire team engagements" are only a qualified success.

I have to wonder, how do Americans react to this game? Is there an assumption going in that because it's about Americans, they must be playing as the good guys? I find it little hard to believe that anyone could read the game that way since, even behind the veneer of jingoism and doublespeak, the actual plot of the game paints the Chinese in a surprisingly sympathetic light. According to the storyline the insurgents throughout Tajikistan have been crossing the border into China and blowing up pieces of infrastructure—giving them one hell of the justification for rolling tanks into the country—yet they're supposed to be the bad guys. Try to imagine a situation where Mexican criminals started sneaking across the border and blowing up power stations and water treatment plants throughout Texas and California. Then after America invaded to stop the attacks, they found Chinese troops already occupying Mexico, who announce that the Mexican situation had threatened their assets in Guatemala. Who would the bad guy in that situation be?

I've played this game for tens of hours, thought about it another few, and now written a review, and I still don't know exactly what the developers intended. Is this a monstrous caricature of American military adventurism? Or does a realistic portrayal of the American military in action just look monstrous to outside eyes? Rating: 6.5 out of 10.

Parents: According to the ESRB, this game contains blood and gore, strong language, violence. You should take a long look at the game before considering it for their children. In addition to the plumes of blood that explode from the hundreds of people who get shot over the course of the game, there's  also the casual racism, omnipresent swearing, and unrepentant shilling being done for the Marine Corps. This game couldn't be more pro-US military if it was a paid advertising product like America's Army.

Deaf & Hard of Hearing: You'll find the game unplayable on the hardcore mode—without an onscreen compass that marks off enemy locations, you would have to be almost entirely relying on audio cues. Playing the game normally will be entirely possible, though, because the game is very good about giving objectives via text, and putting waypoints clearly onscreen.

I have to say I had similar thoughts in a couple of modern shooters. Ever since manshoots left the confined space of WW2 it has been getting difficult to figure out who the ‘bad guys’ were. Also, I find a lot of US-propaganda in modern shooty-games hard to swallow. One of the worst offenders in recent times being Homefront.