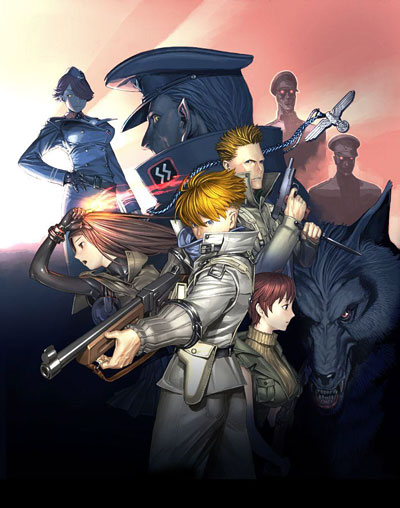 The truth is that all reviews are subjective. Critics, reviewers, and gamers all bring the weight of their experiences and tastes with them to every game they play. I point this out because Operation Darkness nearly overwhelmed my critical reasoning skills. It's a game that hews so closely to my tastes that it might well have sprung wholly-formed from my own mind. Had I been asked, one year ago, what the absolute best premise I could imagine for a game would be, there's an 80% chance my answer would have been "A gothic-horror themed League of Extaordinary Gentlemen battle Hitler's undead army." So how can I possibly look at a game fairly when it seems to have been created for a market of me?

Operation Darkness belongs to that most Japanese of genres, the Strategy Role Playing Game (or SRPG). SRPGs are generally set in fantastical or futuristic settings, and replace the simplified combat 'two lines attacking each other' of JRPGs with methodical turn-based gameplay that focuses as much on strategic movement as it does on powering up characters. It's a niche genre even in Japan, and its fanbase is so small outside of Japan that a new, sub-'niche' word needs to be coined to describe their size and fanatacism. Operation Darkness takes this slow, static gameplay and uses it to create a game with a fantastic premise: What if Hitler had teamed up with vampires and the only hope of defeating them lies in the hands of a team of SAS werewolves?

The genius of the game's presentation, and this is something that characterizes Japanese games far more than their North American counterparts, is that every situation, no matter how ludicrous, is offered with a completely straight face. This is a game where a main character says, and I'm paraphrasing here, "Oh no, the Nazis are summoning zombies! It looks like we're going to need Jack the Ripper's help!" No plot development is too ludicrous, no twist comes too far out of left field for inclusion. Of course, the idea of a game where multiple unrelated strange things co-exist is completely alien to North American gamers. The fact that the game is willing to throw in so many different bizarre ideas is a breath of fresh air. That all of these different characters and stories fit so well together is just a wonderful bonus. As I said in my preview last month, this is a game that allows werewolves to fire rockets at dragons. How much more interesting does a game need to be? 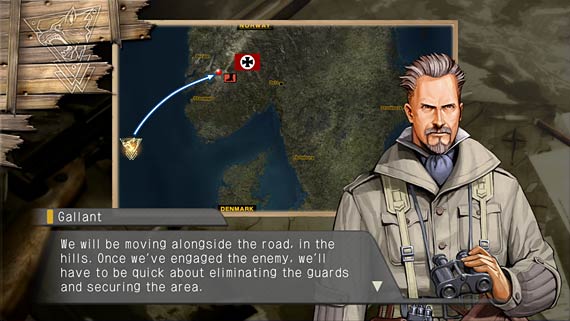 Luckily the game doesn't have to coast on its premise because the strategy combat is extremely solid, with only a few minor mistakes and quibbles keeping it out of the realm of greatness. The battles are handled in the classic SRPG manner, with each character having two possible options in every turn: they can move then attack, or attack then move. Where the game differs from the normal setup is in how turns are handled. Instead of each side getting a clearly-defined 'turn' in which they move and attack with all of their characters before letting the other side do the same, every character moves in a constantly-updating sequence based on players' speed rating. This is a good idea in theory, as it allows spry werewolves and melee fighters a chance to get an advantage on the hordes of foes they're always facing, while enemy tanks, which have a nasty tendency to show up unexpectedly, barely get to move at all.

The other great idea is the new 'cover system', which, despite the suggestion of its name, has nothing to do with the trees and broken walls that litter the battlefields. Instead, it allows characters to forgo their turn in exchange for the opportunity to attack any enemy that enters into their field of fire, no matter how many enemies that may be—so a character with a sniper rifle and a keen eye can deal out far more damage than they could just firing once per turn. Like the speed-based turns, this cover system is an interesting innovation, and for the vast majority of the game, it provides a great new wrinkle on strategy that allows the player to battle overwhelming odds effectively.

While the setting remains captivatingly mad for the entire length of the game, and the strategic combat works well, the game is not without its problems. One of the most notable is that the inventory system is about four times more unwieldy than it needs to be. I understand why individual characters have a weight and inventory limit, but I can't imagine why the items sitting in a warehouse back at base should have one. It's 2008—I shouldn't be spending five minutes between every mission throwing out old items so I can buy new better ones. What's far worse than this is the game's refusal to let players salavage German weapons and items from corpses at the end of missions. Sure, for plot reasons a few of the missions end with the players fleeing, but the rest of the time there's absolutely no reason I should be forced to run from body to body looking for guns while enemies are still shooting at me. 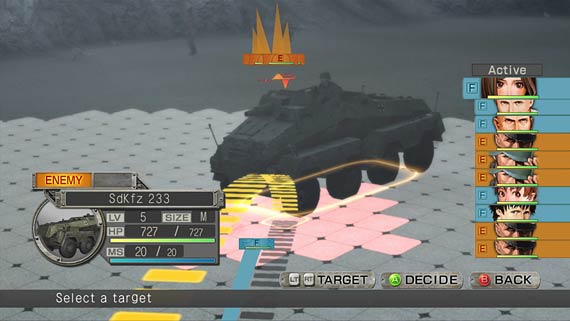 The game's biggest problem, by far, is the way its difficulty curve kind of hits a wall right at the end, and it's entirely because of a bad design decision. For the entire game, the enemies' difficulty level is very well scaled. As player characers pass levels, getting more hit points and more powerful attacks, so do the enemies. It moves at a matched pace, ensuring a constant level of challenge. While everything else is moving at a steady rate, though, the enemies' speed increases far faster than the main characters'. Towards the end of the game, the enemies move so quickly that an average soldier gets two moves for each one of the players', while bosses get between three and five! It's so bad that by the end even tanks move faster than the player.

In theory the players should have enough special abilities to deal with these handicaps, but because the two most important weapons in the player's arsenal, the cover system and their magic powers, take up an entire turn to use, the player has to waste an entire turn at the beginning of each fight just getting into position to use their abilities, while all twentysomething enemies have between two and five opportunities to hit the players as hard as they like. Add the fact that in the last few missions the player can't re-arm between missions (or salvage from corpses), and is asked to fight multiple ultra-fast bosses at once, the game reaches a point of near-impossibility. Every flaw is heightened by the lack of in-mission saving, meaning the slightest mistake can result in nearly an hour of wasted effort.

Operation Darkness succeeds for the vast majority of its 40-hour length. The audacious premise is incredibly fun all the way through, and right up until the last few missions the gameplay more than holds up its end. It's just too bad the game gets so frustratingly difficult right at the end. Beyond my insane, utterly irrational love for everything about the premise, I really enjoyed the vast majority of the game's levels, and the craftsmanship that went into building them. I was all set to recommend this game without reservations, only to have second thoughts when it so utterly dropped the ball. I experienced about 35 hours of good gameplay here, followed by five of hair-pulling, controller-throwing frustration, before I finally gave up, one mission before endgame. That's a ratio I can live with, but anyone who likes consistency, and, you know, actually finishing games, should think long and hard before diving into the most wonderfully ludicrously insane title to come along in years.Rating: 7.5 out of 10

I just bought this game a few days ago and I enjoy it a lot. One of my major issues that you already mentioned above is how fast the enemies move. I’m on mission 11 where Camilia, the big breasted vampire sets up a trap in France near the church. The damn tanks appear out of no where and start blasting my people away before they even get to move. Then the vampires use those stupid stun and fire spells… utterly cheap and annoying. But it does keep the game challenging. One thing I don’t like to much about the… Read more »