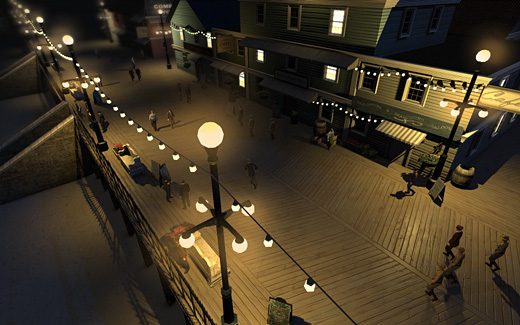 LOW Watching grass grow (figuratively) as I waited for a glitch-slowed clock to advance.

WTF How is this the first time I've had a chance to shoot the KKK in a game?

is a game about building a booze-fueled empire in Prohibition-era Atlantic City, and while it's largely a sim, the developers make sure that the player is personally responsible for every headshot and slit throat that's required to make that dream a reality. Is this because the game wants players to take the time to meditate on just how much blood must be shed to "make it" in America, or is because turn-based combat is neat? Honestly, it's probably the latter, which is a good thing, because Omerta's combat stands out as the best feature in a game badly needing positives.

Taking the form of a small-scale crime sim, Omerta puts players in the shoes of a Sicilian mobster fresh off the boat, desperate to make his fortune in Atlantic City, one conquered neighborhood at a time. To accomplish this task he puts together a gang, sets up a few distilleries and warehouses, then sits back and waits for the cash to roll in. The game is broken up into three chapters, with each one offering a variety of missions. At first the game seems like it's going to have a wide variety of scenarios to offer, but they prove more than a little repetitive in the playing.

In each mission the player starts with an overview of a 20-block section of the city, with absolutely no information about how that area works, and an assigned goal that will wrap up the mission—generally something like "gather x amount of money" or "have x number of businesses operating." The first chore is to find informants that can be bribed, cajoled, or threatened into revealing information about the illicit businesses that the player will use to generate the income required to achieve the game's goals.

Walking players slowly through the rules until they get a handle on the mechanics isn't a bad way to start the game. The problem is that every single mission requires players to go through the same "get the lay of the land, start from scratch" rigmarole every time.

While the occasional level will mix things up by giving players a lot of money or liquor to jumpstart things, by and large the game forces players into repetition beyond all tolerance. The most frustrating aspect is that the rules of business operation don't change from area to area—the player is always free to build whichever businesses they like. Consistency is all well and good, but since the same few combinations of business are unusually profitable, players will wind up building the exact same six businesses over and over again, only worrying about the plot of that mission once they've got plenty of money.

If the sim aspect is a little dull, things pick up when the player gets a chance to delve into the turn-based combat. While it may not be the biggest section of the game (combat is only required to advance the plot at certain points, although optional combat is always available for easy cash) Omerta's turn-based combat is surprisingly deep and enjoyable.

The player has access to a huge number of possible gang members, each with a variety of special abilities and weapons. The combat is handled by moving players around well-designed and believably cluttered maps, looking for cover and good shooting angles on their foes. This process is made more interesting and complex because unlike XCOM, which divides the map into a checkerboard layout, Omerta manages to give the impression that characters can be moved literally anywhere on the field. This causes a few problems from time-to-time as figuring out exactly where to click can be a little fidgety at times, but overall, Omerta's combat is extremely satisfying, and the best part of the game.

The other thing working in Omerta's favor is how accessible it is. I've criticized the repetitiveness of the mission design, but the fact that there are simple rules to follow and a complete lack of confusing stats to micromanage means that Omerta could easily serve as a solid jumping-off point for anyone curious about the Sim-lite genre. The levels themselves are extremely low-stress, with ample resources in every mission other than the last one. Also, since each mission can be completed in around an hour, it should appeal to anyone who doesn't mind chopping their empire-building up into easily digestible chunks.

With all that said, it can't be a good sign for Omerta: City of Gangsters

that I'm recommending it primarily to people who are unfamiliar with its genre. There isn't enough depth to the main game to attract anyone with a yen for crime management games, and while I did enjoy the combat, there's not enough of it to justify the game's purchase as a turn-based-strategy title. With an interesting and underused setting and good production values, it's certainly worth a look, but the hardcore need not apply. In the world of Omerta crime pays plenty, but its virtues aren't substantial enough to sink teeth into. Rating: 6.5 out of 10.


Disclosures:This game was obtained via publisher and reviewed on the Xbox 360. Approximately 20 hours of play were devoted to single-player modes, and the game was completed.

Parents: According to the ESRB, this game contains alcohol references, blood, language, violence! You'll probably want to shoulder your younguns away from this one. Criminals building empires aren't great role models—and even though they seem like square Gs who hate racists, the game has plenty of combat situations where cops have to be gunned down, which could lead to some uncomfortable chats. Also, it's a game about making and selling booze. So there's that.

Deaf and Hard of Hearing: You'll be fine with this one. Real-time and turn-based strategy with plenty of onscreen indicators. No trouble at all.