But There’s A Talking Bear! 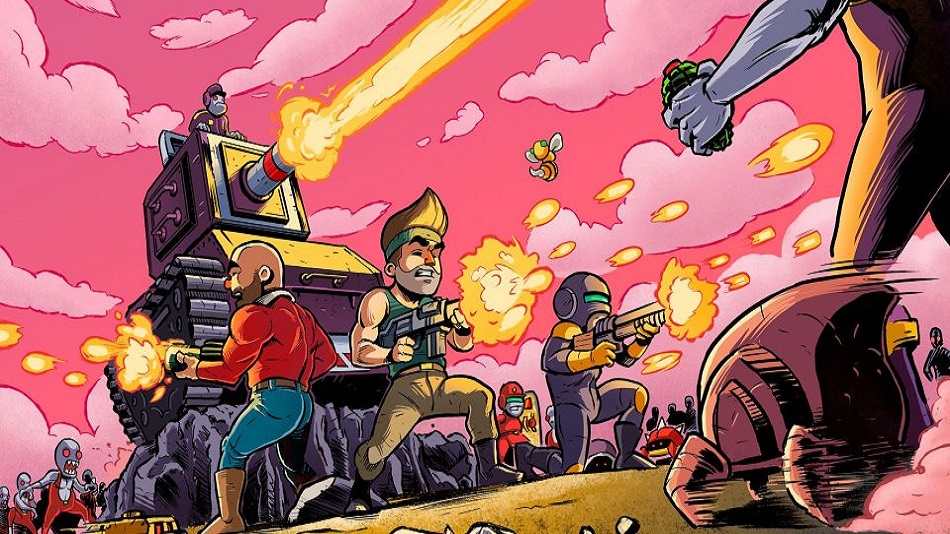 LOW Trying to remember where I was supposed to use the ‘dash’ ability.

WTF Who thought that junkyard robot was a good idea for a boss?

The tragedy of Omega Strike is not that it does anything hugely wrong – it has a terrible map and one bad boss, but those are the only notable missteps. No, the tragedy is that it doesn’t do anything to set itself apart from the crowd of 2D pixel-art platformers. This once-dormant genre is not hot again, and a game needs to do something spectacular in order to stand out. Unfortunately, Omega Strike can’t manage it.

A military-themed metroidvania, Omega Strike casts players as a team of commandos who must battle a mad scientist and his army of cloned robot zombies. Also, at the absolute pinnacle of the game’s weirdness, they have to rescue a talking bear. If the rest of the adventure had been as wild or weird, I would have been left with a more positive impression, but other than that instance, Omega Strike is a by-the-numbers outing.

Starting with a commando, players will run and jump their way through mountains, forests, and industrial facilities, blasting enemies and killing bosses to unlock new powers that will allow them to access previously blocked-off areas. 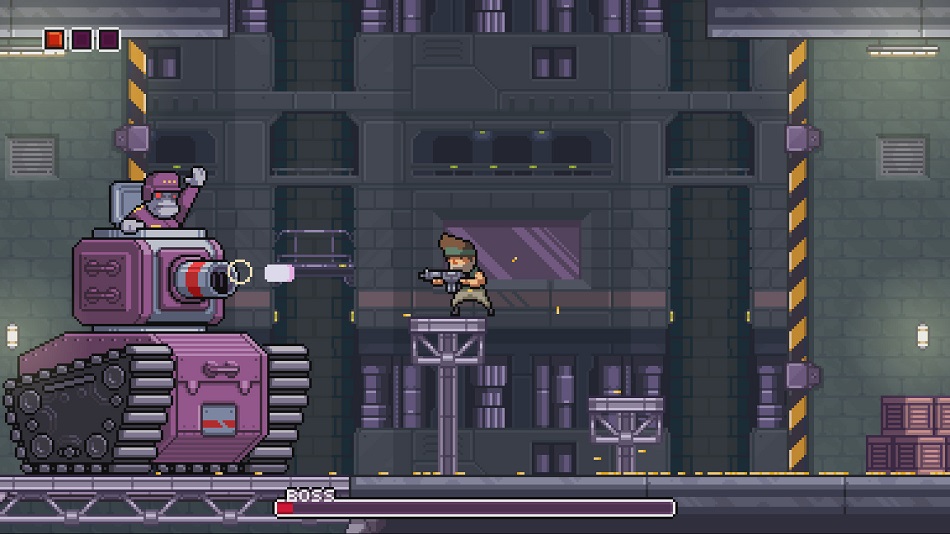 The closest thing to inspiration Strike offers is a character-switching mechanic, where players instantly swap between a machine gun-wielding commando, a shotgun ninja, and a grenade-launching goon. Besides each one having a different weapon, they all have unique special abilities – the commando can do a dive roll, the ninja can double-jump, and the goon can fire at enemies on lower level. Switching between them is a decent feature, but the player doesn’t get to decide how they want to use the characters — all of the platforming is designed with the double-jump in mind, so the only sane way to play the game is to stick with the ninja unless something needs to be shot far away or a little below a platform.

The enemies make little impression. The zombie soldiers and robot animals are all quite familiar, but aren’t rendered or animated interestingly enough to stand out. Anyone who’s played Mercenary Kings or literally any Metal Slug entry has seen the same concepts executed to far greater effect.

The biggest problem, however, is the awful, awful map. Far too small for its own good, Omega Strike‘s map is so tiny and difficult to read that I found myself stuck with no idea what to do because walls with exits look almost exactly like dead ends on the maps. Do the devs expect me to remember a suspicious spot I passed by once with no way to mark it? I spent nearly two hours running through previous areas looking for traversable obstacles to keep the game going. Would it be so hard to have included a marker to remind players about a wall they couldn’t destroy, or a floor that needed to be blasted?

There’s nothing here that rises above ‘serviceable’. Omega Strike offers tight controls, satisfying platforming and combat, and one of the most forgettable metroidvania worlds I’ve ever encountered. It’s cute and I’ve played worse, but it never manages to rise above the crowd. Rating: 5.5 out of 10

Disclosures: This game is developed by Woblyware and published by Digerati. It is currently available on PS4, XBO, and PC. This copy of the game was obtained via publisher and reviewed on the PS4 Pro. Approximately 8 hours of play were devoted to the single-player mode, and the game was completed. There are no multiplayer modes.

Parents: According to the ESRB, this game is rated T and contains Violence, Blood and Gore, and Mild Language. The mild language is anything but scandalous – it’s just ‘hell’, ‘damn’, and the like. There’s blood when enemies are hit and gore when they explode, but it’s fairly tame by pixel-art standards — no gruesomely exploding heads or anything like that. Even young kids most likely won’t be scarred by this.

Deaf & Hard of Hearing Gamers: I played most of the game with the sound off and encountered no issues. All instructions are given in text, and there are no audio cues that lack a clear visual component. 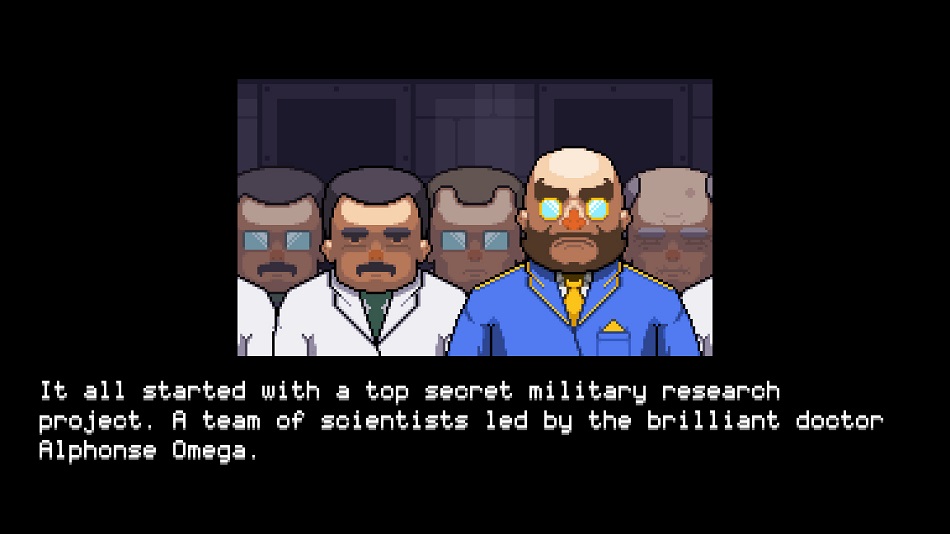 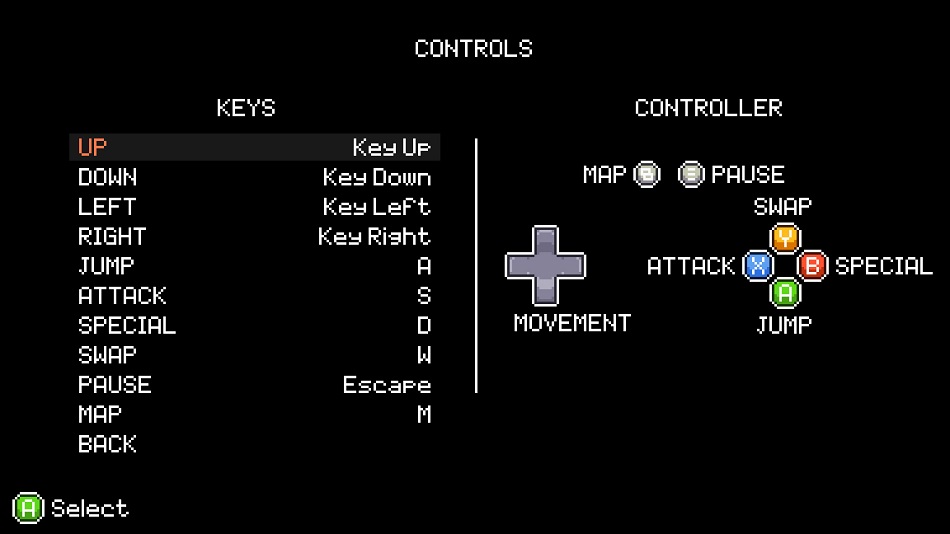 What game did you play? This game is pretty great. Dude, it is a cheap indie game, and a good one at that. I agree, the map sucks, but do you really even need it? Super Metroid’s map sucked too. Does that mean Super Metroid sucks? Why is it so impossible for people to make decent reviews? There is no pleasing people, especially when they are looking at a game the completely wrong way. I find myself rolling my eyes at GameCritics reviews all the time.