I didn't think about H.E.R.O. in general or my record specifically for a full month after that long night. Then, due to happenstance, I found myself cleaning out some boxes from my mother's home over Christmas, ruthlessly disposing of anything I'd ever been graded on. Near the bottom of a box of sundry tossables, I came across this: 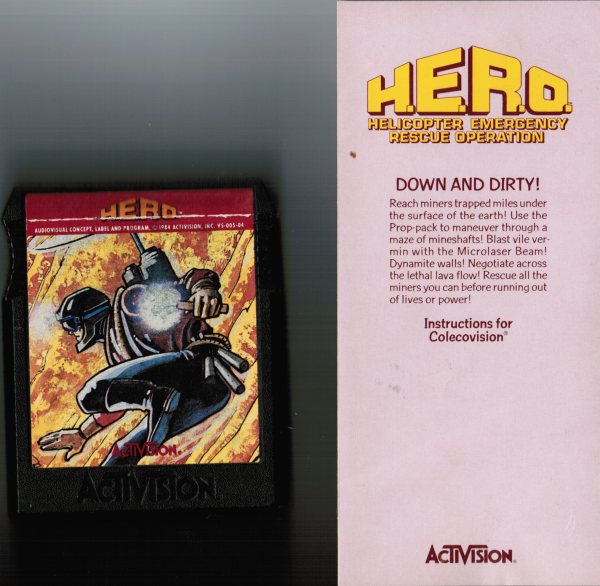 My actual H.E.R.O. cartridge and manual. The box is long gone, but everything else was in as good condition you could expect after spending two decades at the bottom of a box of videotapes. Flipping through the manual (unfolding, really—these were not complex manuals—although they are more detailed than Electronic Arts' current attempts at instruction), I realized why the game had stuck with me to such an unusual degree. 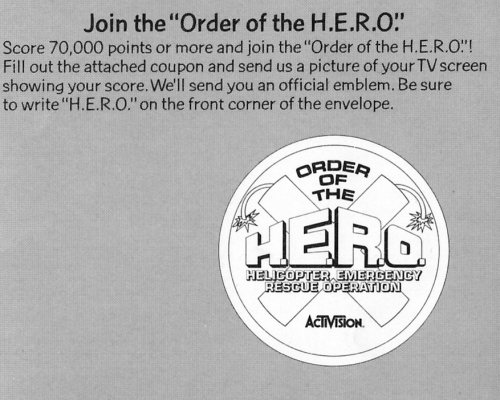 I'd always wanted that damn badge. The badge they gave you if you proved your skill at the game and sent them a dollar. Who wouldn't want that badge? The crazy part—thinking back, the game seemed so difficult that I'd conflated earning the badge with beating the game. The discovery that all I'd ever been required to do is pass 70K points was something of a shock. You'll clear that by level ten. There's no way I hadn't qualified for this as a child, playing on the Coleco… so why didn't I have this badge? Was this too frivolous an item to waste money and a photo on? Had I sent off an application, only to discover they wouldn't send the badge to Canada? I can't say what went before, but here's what's going to happen now.

I'm getting that badge.

I've just printed out a screenshot of my final score and a copy of the coupon—which has no expiration date on it. Tomorrow I'm going to attach a money order and mail this off.