Here are the rules of H.E.R.O., as explained by the manual.

On some level, those point values seem absurd. A million points to beat the game? That's flat-out ridiculous. No one could ever actually expect to do that, right? It feels more like Y2K situation than anything else. They realized they didn't want to have to go back and code in a seventh digit to the score, so they simply called the lockup that occurred when you roll past 999990 a "victory".

Daunting thought it might have been, the score didn't seem entirely out of reach. After all, I knew that if I could memorize the layout of the monstrous level 20 and get the timing down, I'd be somewhere close to two hundred thousand points. Presumably I'd then have to start the game over, and since I was able to make it through the first 15 levels without dying, once I had that last level licked I was sure I'd be able to do it 4 additional times without too much trouble.

I quickly ran into two key problems. The first: level 20 is obscenely difficult. In addition to the fast-moving versions of the enemies that plague earlier levels, there are copious dead ends (the kind that steal a life, rather than just waste time), and navigation tricks that require almost superhuman timing and dexterity. The, when I finally managed to learn its tricks and beat level 20, I ran into the second problem—I wasn't going to get to play the whole game over, racking up easy points. I was reset back to level 13, and would only get eight levels to build extra lives up—six lives sounds like a lot, but when the the last three levels are hard on their own, and level 20 is guaranteed to steal 2-4 every time, it can get pretty tense.

After a few false starts over the course of a week, getting my score into the 3-4 hundred thousand range, then getting controller-throwingly furious at abruptly losing half an hour's work when I got myself killed, I was almost ready to give up. After a particularly dispiriting series of losses I had the classic "1 more game" moment at Midnight on a Wednesday. This would, naturally, prove to be an unbelievably stressful decision.

Blasting through the first 19 levels with a shocking degree of ease, I had what might have been my best-ever level 20, beating it in a flash. The second playthrough went equally well, until overconfidence got the better of me, and I found myself down to my last life at around 300K, and then again at 450. Still, as badly as it was going, I always seemed to be just a few thousand points away from a free life, which had me clinging to the notion that if I could lift my game just a few degrees, I'd be exactly where I wanted.

Then it happened—without any dramatic revelation or sudden insight into the game's mechanics, I just seemed to have a handle on the flow. As tense and nervously sweaty that I'd gotten mid-way through the game, by the time 700K rolled around I was certain that I was going to beat H.E.R.O.—it was just a matter of keeping my head down and grinding my way through the last few levels. I was no longer stressed about playing, and my mind was freed, nearly an hour into the proceedings, to consider why I was so determined to set this record.

Obviously it's something a young me would have appreciated twenty-five years ago. Bragging rights alone would have made the effort worthwhile. These days my gaming "accomplishments" don't seem like anything worth broadcasting. Of course I'd put out a tweet when the record was done, but beyond that—who cares? It's just H.E.R.O. So what did H.E.R.O. mean to me? Had it really meant that much to me as a child? I wasn't killing myself to set a high score on Time Pilot, a game that I'd spent just as much time on over the years. If someone told me that I could boot up Gateway to Apshai on Xbox Live and finally beat it I don`t think it would be worth the three dollars it would cost to try.

Was I using beating this game to stand in for all the projects I'd left unfinished? To remind myself of a less complicated time in my life? For the meagre ego boost that would come from being the best at something completely insignificant?

As I beat the game I didn't know exactly how to feel. The tensest moment of the whole ordeal was watching the replay upload, knowing that an internet outage (a frequent occurrence 'round these parts) would wipe out all evidence of my victory. That was the strangest part of my reaction, I think—having the score didn't bring me any real joy, but having it disappear would have been wrenching. The kicker of it all was the discovery of just why the top H.E.R.O. players—now the second and third best, according to the leaderboards—had such bizarre scores. 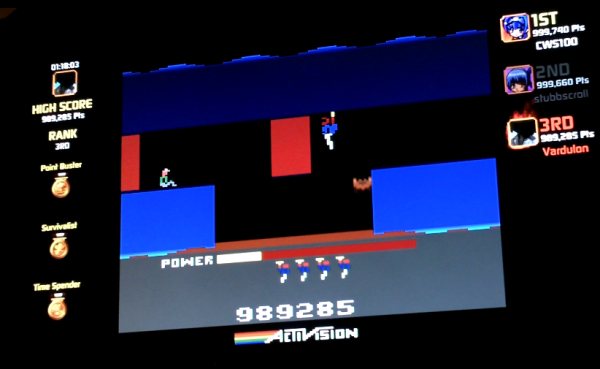 660? 740? I thought we were playing to a million here, people! Then, as I rescued that final miner, it all made perfect sense. This deep in the game, every segment of power left in the life bar was worth 600 points, and the game ends when the score ticks over a million—my two contemporaries had beaten their games with a rescue, and their scores remain frozen just before that last six hundred was tacked onto it. After beating level 19 for the umpteenth time, my score stopped at 999,885—forcing me to blow up a lava wall and kill a moth to finish off the mil. Only a bizarre fluke pushed my score to the top of the heap. I wasn't the best player of H.E.R.O. at all—just the third person on XBLA to finish it.

So what was it all for?

Next Time: What it was for.

It’s such a thrill to hear about this game again. I first saw the game running on a Commodore 64 as a young boy, but it was a few years before I found it again on the Atari 2600. I’m disappointed to hear that it’s the 2600 version which has survived the mists of time – I always remembered the C64 version as looking gorgeous, but of course a quick search on youtube reveals it’s anything but. Still, what lies at the heart of every good game is the game mechanic; and playing through Gears of War 3 last year… Read more »

Nice article man. I recognize those feelings all too well.