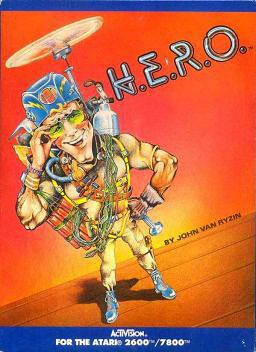 So, some background to start. H.E.R.O. was an especially beloved game from my childhood, largely because it was my game. I'm sure anyone with siblings will recognize the phenomenon of shared game consoles and playing time, and the special joy that comes from having a game that is not only one's own property, but that holds no interest for siblings, so playing it offered a safe haven free from fights over controllers. I couldn't say exactly why I had selected H.E.R.O., or what occasion led to it being gifted to me, but I treasured that title above all the other games on my Colecovision. Even Evolution and Mr. Do's Castle.

A surprisingly complex game for its time and platform, H.E.R.O. asked players to take on the role of Rod Hero in his quest to rescue miners after a collapse, using a helicopter backpack, laser helmet, and supply of dynamite to clear the way of any dangers or obstructions. H.E.R.O. offered such clever ideas as dynamite with a blast radius that had to be taken into account, simulated momentum when flying, and, in a charming note, lanterns that could be destroyed, plunging the screen into darkness—the only way to get a look around afterwards? Ignite a stick of dynamite—its fuse would bathe the whole level in faint gray light in the seconds before it exploded.

Naturally, when the game became available on the XBL Game Room, I snapped up a copy. Sadly, it turned out to be the Atari version of the game, so rather than the lush Coleco graphics of my childhood:

Not a huge difference, by any rational standard, but when I was five that tiny margin gave me a bizarre feeling of pride. Until Nintendo came out and ran the table, of course.

I played the game on and off for a few weeks, and accomplished little more than I had as a child. On a good day I was able to make it to level 18 (out of 20), which was about as far as I'd ever gotten—and the novelty quickly wore off when my high score capped at around 10th on the leaderboards.

Fast-forward a year. I received a message through Xbox Live—a stranger complimenting me on my high score, and expressing frustration that I wasn't rated higher on the leaderboards. The second part of the letter confused me a little, so I investigated said high-scores. It turns out that a glitch during updating had screwed up most of the replays, so the replays all of the actual best players were, instead of histories of the hour+ they spent toiling against bats and cave squid, messes of bizarre reboot loops and level select glitching.

For some reason, though, seeing no evidence of just how the game was beaten left me wondering whether it was actually possible to do so, or if the absurdly high scores themselves had been—like those  on Jackal—the result of rampant glitch exploitation.

I resolved to beat H.E.R.O., simply to see if it could be done.

Next Time: It could be done.

Holy Krokus, I had Hero and a ColecoVision, albeit my copy was an Atari version that I played through the adapter. I remember it as blocks of solid color–I had no idea the Coleco had that much better graphics.

It’s funny how the notion of beating a game has changed over time, from the ad infinitum of increasing difficulty in these old school games to today’s games that hold your hand for 5-10 hours until you reach the finish line.

I had Hero on the C64. Loved it. I remember in particular the joy of getting the ‘drop and turn’ moves down. Good stuff. BUT HOW IN GODS NAME DID YOU PLAY IT WITH A COLECOVISON CONTROLLER?! You hands must have been palsied afterwards!