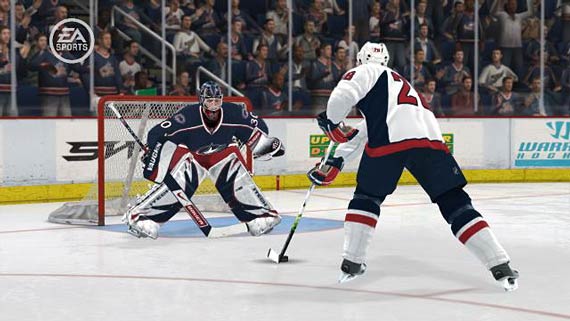 I think it would do most developers well to remember that every videogame is someone's first videogame. It's an understandable mistake to make. The people who make videogames also play videogames, so there's always a danger of them assuming that their audience is every bit as familiar with genre shorthands as they are. NHL 08 is the most egregious example I've seen of this problem in a long while. It's a wonderful hockey simulator that, through its total unwillingness to instruct me on how to play, proved far more frustrating than I'm sure the developers had hoped.

A full-service hockey simulator, NHL 08 lets players do everything from jump straight into a quick game to simulate an entire season. In addition to licensing the NHL's roster of players, EA acquired the rights to the AHL junior league, various European teams, and many countries' national teams. Yes, NHL 08 is the game that finally let me live the dream of staging a game between Canada and Belarus (spoiler alert: Belarus lost). There are also a host of multiplayer options, allowing players to either gather around a single television with up to three friends, or go online with up to five—it's not the twelve player experience that hockey fans have long dreamed of, but it's still pretty satisfying.

As is to be expected in an EA Sports game, NHL 08 has fantastic production values. Ice is marked as skates cut across it, there are bone-crushing THUMPS as players are checked into the boards, and every goal is replayed in the kind of satisfying slo-mo that fans have come to expect. Everything is tuned to the kind of perfection that only huge development budgets and experience working on many other titles in the same series can create. It's a pleasure to look at, the controls are tight; technically speaking, there's nothing wrong with this game.

No, NHL 08's problems lie in the fact that it was being developed solely for people who played NHL 07. Unfortunately, I hadn't. In fact, despite the fact that I'm Canadian, I haven't played a hockey game since console processors got a second digit. I was at something of a loss when trying to figure out just how to play the game, and the game didn't do much to help me out. Beyond two practice modes that allow the player to skate around cones and aim slapshots (although, for some reason, not at the same time), there's no training of any kind. Just a short video demonstrating that there are new complicated movement options, without a clear explanation of how to do them. 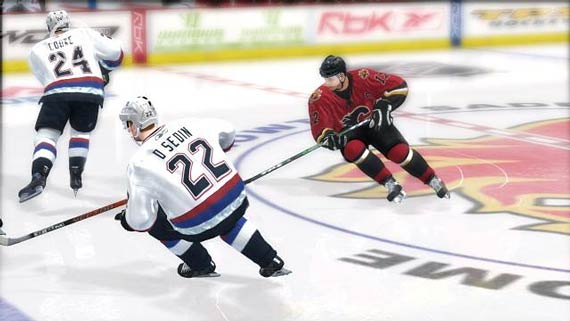 I know most of the people who play this game are going to be people who traded in 07 to help pay for it, but speaking as a newcomer to the series, a little handholding might have been nice. The lapses in the game's instruction manual and lack of a training mode border on negligence in certain respects. For example, nowhere in the game's documentation does it tell me how to win a faceoff. Do I press a button? Wiggle a stick? The developers seem to assume that I'd just know. Would it really have been that hard for them to add a training mode? Walk the player slowly through puck handling, shooting, checking, even brawling?

Even more egregious is the fact that nowhere in the manual or game are the actual rules of hockey laid out. Unlike football or baseball, with easy-to-follow stop/start gameplay, hockey is a continuous, chaotic mess, with five men constantly fighting over a barely-visible rubber disc. Its rules are similarly confusing, governing who's allowed to carry the puck where and when. I've never been so happy to be Canadian—without that bone-bred knowledge of the game I would have been very confused about why people kept calling me offsides and yelling about icing. These problems are only compounded by the fact that players' positions aren't listed onscreen. When I pass the puck and take over a new player, only his name is listed. Am I expected to memorize which position everyone plays? Because far too often I found myself passing the puck to a defenseman without realizing it and skating myself into an offsides.

Between getting all the aesthetics right and offering stellar gameplay, NHL 08 has an awful lot going for it, and I'm sure it will please longtime fans of the series. I was legitimately shocked, however, by the callous, alienating disregard it shows to anyone who isn't a longtime fan of the series. Once I got the hang of the controls, I had a great time playing it. I just wished the game's developers had been willing to meet all the newcomers to the franchise halfway. Every videogame is somebody's first, and if NHL 08 was someone's first hockey game, there's a good chance they'd be so frustrated they wouldn't stick around for 09. Rating: 8 out of 10

The only glitch in this game is that Sydney Crosby is made to be god of hockey. He is untouchable. Try and hit or out skate him. Try and out score him in a season. Wont happen.

why are you complaining about them not explaining the rules of hockey to you? does any other sports game do this? does madden 2008 tell you that you have to go 4 downs to get 10 yards? that you can kick a field goal on 4th down? that you can go for an extra point or a field goal? why do you think nhl 08 should provide you with a hockey manual? go look up “rules of hockey” on the web…. christ.

if you don’t know the rules of the game and you don’t understand hockey, why would you want to go out and pay 60 dollars to play a game that you don’t enjoy watching? no other sports video game lays out all the rules for you. Saying that nhl 08 should explain what offsides is, is just like saying madden needs to tell you that your guy can’t cross the line of scrimmage till somebody says hut, or fifa, i have love the game and have friends that hate soccer that will play it and don’t have a clue about… Read more »

I totally agree with you. I just got the game, and can’t figure things out like checking, line changes, etc. Any suggestions. Maybe shooting me an email back with some pointers.

I do agree with the other responses that it is incredible tough for a manual to explain all the rules of the hockey. Good thing you were born in God’s country.