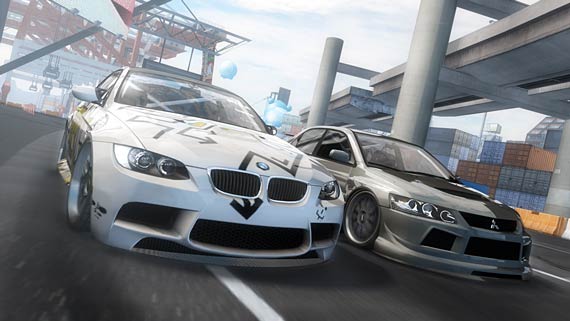 Where are the police chases?

I’ll admit that I’m not especially familiar with the history of the Need for Speed franchise. My first experience with the series was with 2006’s NFS Most Wanted, an average arcade-inspired racing game with a single standout feature: Amazing police chases. The follow-up, NFS Carbon, added a couple of new modes: the mildly diverting "drift" and the frustrating "canyon chase". The police chases were back, but hamstrung by the fact that the city map was so labyrinthine in its construction that it was nearly impossible to get a good chase going. Naturally, as I unwrapped ProStreet, I was looking forward to hours and hours of fun fleeing from the fuzz. The police, however, were nowhere to be found.

NFS ProStreet takes an entirely different angle on the world of illegal street racing that the series had so entirely ensconced itself within. This time, it’s about entirely legal, corporate-sponsored street racing. NFS, once the home of huge, free-driving worlds, is now reduced to an entirely menu-driven system of race selection. Likewise, the entertaining, if cheesy, stories of betrayal and revenge in the racing underworld featuring oddly filtered and processed live-action footage have been removed, replaced with the thinnest skeleton of a scenario, in which the main character must become the world’s greatest racer because, well, because he has the opportunity to do so. And what more reason does he need, really? 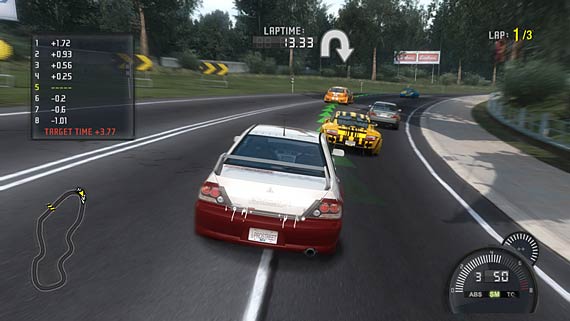 While I’m not calling these changes a fatal flaw, ProStreet can’t help but suffer in comparison with its predecessors. With nothing more to offer than car customization and a list of available races, it almost seems like half a game at times. The watchword here is realism. ProStreet is attempting move its arcade-style racing into the world of real tracks and real sponsors. The setup is easy enough to navigate: The player selects a ‘race day’, an event made up of events drawn from four different styles of racing (and each requiring its own car). Their score is determined both by their finishing position in the events (places 1-3 earn points, 5-8 do not) and their performance against pre-set benchmarks based on which type of car is being driven. A race day can only be ‘won’ if a certain score threshold is passed, and ‘conquered’ once a second, higher score is reached. The points structure ensures that each day is winnable even if each race isn’t. Conversely, it’s possible for a player to win every event and still not conquer the race day if they’re not able to challenge records.

The game is certainly helped by the variety and modular nature of the available tracks. Each one of the race days is set at a single course that has a huge number of possible configurations. While one race might circle lazily around a wide oval, the next, technically on the same course, might feature a drift-friendly series of hairpin turns. These changes go a long way to keeping things fresh over the hundred-odd races it will take to complete the game, but some track fatigue is inevitable, especially since a couple of the courses are based on famous real-life tracks that have been featured prominently in other racing games.

There’s also an impressive number of race types, although in implementation they tend to be a little hit and miss. When the game sticks to well-tread ground, like simple lap races, time trials, and drift competitions, it’s all relatively competent, but a few of the new race types just don’t seem to fit. The worst offender is the Drag Race, a two stage contest where the player has to first spin their wheels at a certain speed (to heat them for traction!) and then accelerate as fast as they can while shifting at precise moments. For the entire (10-second) race the player can keep their finger on the gas, never touch the wheel, and all they have to worry about is shifting when a little line hits the green zone. It’s more of a timing game than an actual competition, and its incredible simplicity stands in stark contrast with the rest of the race modes. The other new addition, High Speed Races, also poses a problem, if only for those of use who play racing games without wheels. Like NASCAR before it, this race type asks the player to maintain an incredibly high speed while making gentle turns along exact arcs, a level of precision that the Xbox controller just can’t offer. 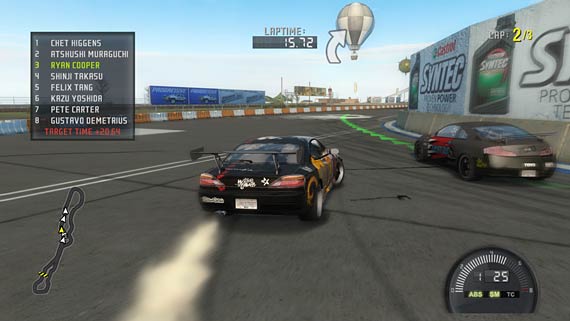 Far more impressive, however, is the opponent AI. This has long been a specialty of the NFS franchise, with aggressive drivers willing to bump the player—or each other—off the road at a moment’s notice. When I saw that the game was a more formal track-based racer, I worried that I’d be racing against Gran Turismo-style Time Trial ghosts, always making the same turns at the same speed. Those worries were completely unfounded, and the game’s new damage engine gets a great workout as cars grind against one another at each turn. This speed and aggression, combined with often uneven offroad terrain ensures that every now and then the player will even be treated to the sight of an opponent barrel-rolling into last place.

Need For Speed ProStreet is one of the strangest hybrids I’ve seen in a while: the structure and restrictions of a formal ‘realistic’ racing game, with the speed and roughness of an arcade street racer. It was nice to see some truly aggressive driving on a real track, and I can’t say it wasn’t a blast, after years of racing it straight, to finally be able to nitro my way down Infineon’s straightaway, but the game still doesn’t feel whole. I go to arcade style racing games for preposterous speed adventures, not circular courses and ticking clocks. ProStreet may not be a comfortable mix of two racing genres, but it certainly is an interesting curiosity.
Rating: 6.5 out of 10

Disclaimer: This review is based on the Xbox 360 version of the game, played without the Microsoft Wireless Wheel.