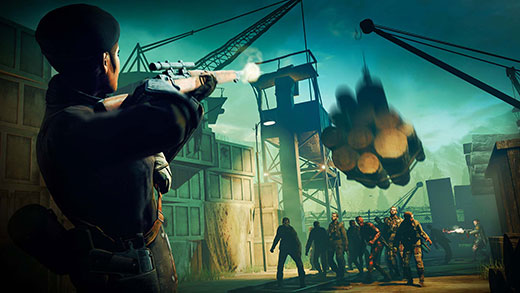 LOW The fact that some levels basically can't be played solo.

WTF It's the zombpocalypse. Why are zombies hiding inside suits of armor?

Nazi Zombie Army was a fun departure for the Sniper Elite series, repurposing V2's assets to build a charming little zombie massacre simulator. The war-torn cityscapes looked great with viscera and pentagrams splattered on every surface, and shooting hordes of zombies with well-placed sniper rounds was a nice change of pace. Yes, the levels were a little on the short side, and yes, some areas were obvious pulls from sections of V2, but both NZA and its sequel were easy to like since they were made as a lark by the devs as a side project, and sold at discount prices.

Now? They're being released as a full package along with a wholly new third chapter, and the entire franchise has gone from a 'minor investment/meager reward' affair to a genuinely fantastic package.

Players who enjoyed the first two games in the series will find little new in their presentation here. They've been faithfully recreated on consoles, with players of V2 still able to enjoy taking a tour of numerous familiar locations now overrun by the hungry dead and their annoying skeleton sidekicks.

The gameplay design is relatively simple—players run through some narrow alleys to a defensible location, then some pretext is given to begin a zombie siege. Repeat 18 times, and the first two episodes are basically covered. It's all well-built, but there's nothing in it to impress players looking for something more than a slower-paced Left 4 Dead.

On the other hand, the third episode surpasses all the expectations that the first two create.

Obviously built as new from the ground up, NZA3 features a wide variety of interesting locations that move the soldiers out of the city, through a haunted forest, to a mad scientist's castle, and finally the mountainside headquarters of the undead Reich. The level design is stellar, the new enemies are challenging and scary in equal measure, and it finally offers the series a boss fight worthy of the name. If Nazi Zombie Army was an experiment, the third chapter proves it was a successful one.

That's not to say the NZA Trilogy is without problems, though. The biggest issue is that the lack of AI helpers makes the game exceptionally frustrating for solo players. Even when the enemy spawning rate is set to a level meant to be appropriate for a single person, many of the siege setpieces are designed so that multiple angles absolutely must be covered at all times, making them basically impossible for anyone not in co-op. A few AI characters throwing down some additional covering fire would have gone a long way towards improving the solo experience.

On the upside, playing with co-op partners works fantastically. The levels were clearly designed with this in mind—areas are big enough so that there's always room for each player to set up their own angle against the onrushing hordes, but streamlined enough so that players will never get lost and trapped without backup. There are even a few new survival levels that challenge teams to survive wave after wave of Nazi zombies in a series of large forts. These are also essentially unplayable by solo players, but a complete blast for teams working in sync to set traps and explode skulls.

The Nazi Zombie Army Trilogy is one of the better co-op shooter experiences available on current generation consoles, and the slower pacing and shambling foes give it a character unlike anything else out there. Taken as a complete package it's a great shooter, but given that it's such an impossibly uphill battle for single players, only those with Xbox Live Gold and PlayStation Plus need apply. Rating: 7 out of 10

Parents: According to the ESRB, this game contains blood and gore, intense violence, use of alcohol. Parents should keep their children very far away from this game. There's no booze, smoking, or sex, but almost every surface in the game is decorated with either internal organs or a screaming corpse. Games don't get much gorier than this, and it's absolutely not for kids.

Deaf & Hard of Hearing: You will be mostly fine with the game. For the most part you'll have visual warnings about approaching zombies, and all instructions are presented as text. Unfortunately the 'suicide zombie', who runs up and pulls the pin on a grenade, usually killing with one hit, announces himself primarily by screaming at the top of his lungs(does he still have those?). He's much more brightly lit than other zombies, and easy to pick out of a crowd, but if you happen to be covering another angle, not being able to hear his wailing can lead to a nasty, game-ending surprise.