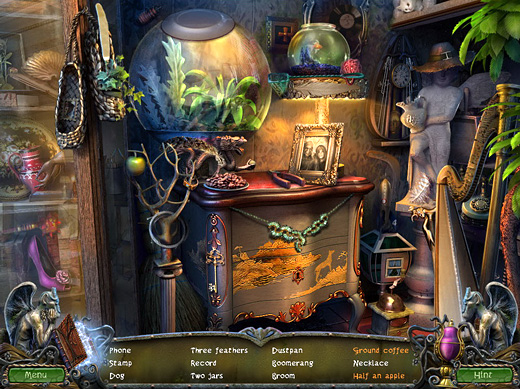 HIGH Finally raising the last piece of that bridge!

LOW Good, you found the key—now run to the other side of the once island again!

For the first half-hour, Natural Threat: Ominous Shores feels like it might be building towards something special. The game opens with the player taking on the role of a recently-hired assistant to a mad scientist determined to crossbreed animals with plants. As the player carefully removes insects from experimental plant beds and searches out the ingredients for a mutagenic cocktail, gamers will be hunting for objects in believably cluttered locations, giving the whole thing a natural feel. Then the scientist's experiments prove successful to a tragic degree, and the plot jumps forwards a few decades, where a more generic story and less impressive gameplay are waiting.

As I wrote above, the game's opening is impressive in this respect, with a single object-hunt screen managing to look like storage area of a man with more important things to worry about than the orderly arrangement of his tchotkes. Once the time-jump is complete, and the player is now controlling a generic youth whose party-boat sank near the island, the screens get needlessly messy. If the mere appearance of incongruous items like suits of armor and cuckoo clocks on this isolated Caribbean research outpost wasn't bad enough, the game commits the cardinal sin of HOGs—arbitrarily changing the scale of items to better hide them in stages. It's all well and good to tell me I'm looking for a "dog" and then trick me but putting a small drawing off in the corner, but making a hex nut the size of a human head in order to conceal it is just unfair.

It's pretty much a fifty-fifty split in this game. While there are plenty of screens that ask the player to collect over a dozen random objects, there are also a few progressive item hunt areas, where every item in the list has a specific purpose and relevance to the puzzle being solved. These puzzles are well-enough designed that it winds up throwing the standard screens into sharp relief, making them seem more perfunctory than anything else.

It's in this area that the game really falls apart. While HOG fans have come to accept the "find a key to open the chest—and fourteen other nonsense items for no reason!" puzzle framework as a necessary evil of the genre, Natural Threat feels perfunctory even by those lax expectations. It isn't just how many times players will be asked to go back and hunt for objects on the same screen—although that does get tiresome—it's how little effort the developers put into integrating the searches into the story. There are many occasions in the game where I came across a glowing field letting me know that a HOG screen is available—but the plot hadn't presented me with an impassable obstacle or a mystery to be solved. Not only was I faced with the prospect of picking twelve objects out of a pile of refuse, I didn't even know which of the dozen was the plot-related item that I was supposed to be looking for. That's just sloppy design.

Natural Threat's visuals are attractive enough, and nearly half of the puzzles are well-designed for the genre, but it never gives the player a good reason to keep playing. The central mystery of the island is kind of a dud, and the main character and their friends are such ciphers that it's not really possible to care if they get off the island, except in an objective, "getting-eaten-by-carnivorous-plants-is-a-bad-outcome" sort of way. Without technical accomplishment or a compelling narrative, Natural Threat never rises above the crowd to distinguish itself in any meaningful way. There are better ways to spend time hunting pixels. Rating: 6.0 out of 10.


Disclosures: This game was obtained via publisher and reviewed on the PC. Approximately four hours of play was devoted to single-player modes, and the game was completed.

Parents: According to the ESRB, this game contains mild violence, mild blood, tobacco reference. You shouldn't worry too much about your children playing this one. There are a few scary moments, and a fairly European attitude towards smoking, but beyond that it's completely youth-appropriate.

Deaf & Hard of Hearing: You should be fine. None of the puzzles have important audio cues, and the game's plot is told through text and subtitles!