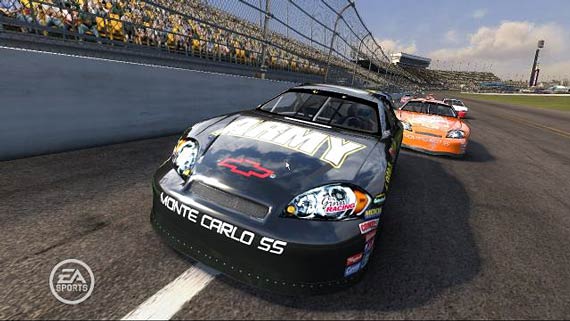 I am not properly equipped to play this game. I literally do not have the equipment necessary to play the game: namely, the Microsoft Wireless Force Feedback Wheel. It's so key to playing the game that I considered just turfing this review and letting someone else handle it. Then I noticed something. Nowhere on the game's packaging or in its documentation does it say that the game should be played with the wheel. Which is why I decided to go ahead with the review. Just in case someone else was considering playing this game without the wheel, I wanted them to know just what they were in for.

NASCAR 08 allows players to live the experience of driving around in a circle over and over again for up to three hours at a time. I hope it doesn't sound like I'm being glib, because that's a literal description of the sport being simulated. In an attempt to be as true to life as possible, the game offers a wealth of licensed cars, drivers, and tracks, all bathed in the most omnipresent product placement I've ever seen in a videogame. And that includes the time the Burger King was my boxing trainer. NASCAR's greatest asset is the painstaking amount of realism and customizability that it offers the player. Seemingly every aspect of cars can be tuned, from grill height to the braking strength of the different wheels. The driving, too, is satisfyingly, if not punishingly, realistic.

NASCAR racing is a game of inches, getting close to a car to draft in its slipstream, then weaving between two other cars to take the lead. Even touching another car or wall can have catastrophic consequences. The simulation doesn't end with the racing itself, either. After completing the game's lengthy and informative training mode, which gives newcomers a nice shallow learning curve while they get up to speed, they can embark on a full season of racing, going up against existing drivers and teams in actual sponsored races. There's no reason to be afraid, though; race lengths are fully scalable, lasting anywhere from ten to 500 laps. This allows players to experiment with pack racing in a safe environment before they try the more complex and challenging aspects of endurance racing—such as pitting five times in a four hour race. 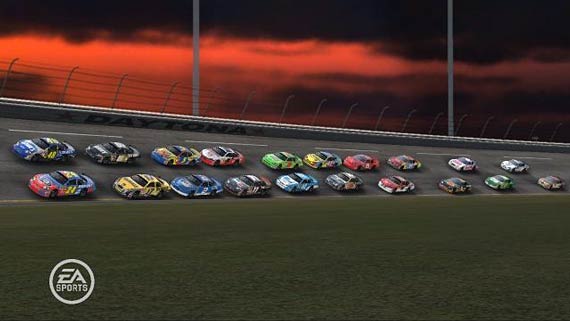 Most of the game works so well that it's all the more tragic just how unable the game's control scheme is to hold up its end of things. One of the key features of real-life NASCAR tracks is the banked turns, which allow cars to safely navigate them without slowing down. In order to take these turns at high speed the driver must enter at the exact right angle, and keep the wheels turned at a precise degree. Drivers are used to twisting a wheel just a little to make a turn, but it's nearly impossible to judge which degree of pressure on a thumbstick represents that degree of turning. Even if I were to manage to find the correct angle, trying to recreate that exact thumb position a hundred times over the course of a race, with even the slightest over- or under-steer leading to disaster is just far too difficult.

My biggest complaint about the game, however, is just how closed off it is to anyone but the hardest of the hardcore. How many people are really willing to play a race for hours at a time? Yes, the longer races can be cut down, but some of the challenge and story-based races pass the 20-lap mark, which is just too long to expect anyone to play without saving. Is mid-race saving massively unrealistic? Sure, but most games these days allow players to decide just what level of realism they want to experience. I can turn off car damage and tire wear, but if another car taps me the wrong way on the final lap of a race, I'm expected to replay up to 45-minutes of gameplay? That's the most severe punishment I've seen a game mete out in years. I'm not suggesting the entire game be simplified to this level; obviously purists and masochists could elect to play the game as realistically as possible, but a small change like this would open the game up to a much wider audience.

Coming from the world of arcade racing games, NASCAR 08 proved as something of a shock to my system. Forced to do without drifts, nitro, or my beloved autocannons, at first I didn't understand the appeal of carefully working my way through a crowd when I would normally just badger my way to the front at any cost. Gradually the game grew on me though, and I found myself intrigued by the precise reflexes and careful planning that success required. It's too bad that an awkward control scheme kept me from being able to enjoy it. Maybe with access to a steering wheel this game actually is the wonderful racing simulator it aspires to be. But for those of us who play games with the controllers that came with the system, NASCAR 08 is just too flawed to be worth playing. Rating: 5.5 out of 10

Disclaimer: This review is based on the Xbox 360 version of the game, played without a steering wheel.

First Halo 3, then NASCAR then this garbage review. I thought you were just trying to hype traffic with your horrible Halo # review. Now I know the truth. you are the worst reviewer ever. Your review of NASCAR is qualified by the fact you don’t have the wheel? Lame. Fail. NHL is too confusing for poor, icky, wicky, Danny boy, awwwwww poor little guy… Lame. Fail. And as usual AIDS. Hey, I have an idea, maybe they can let you review GTA 4 and you can slag it because you have not played one since it was in 2-d… Read more »