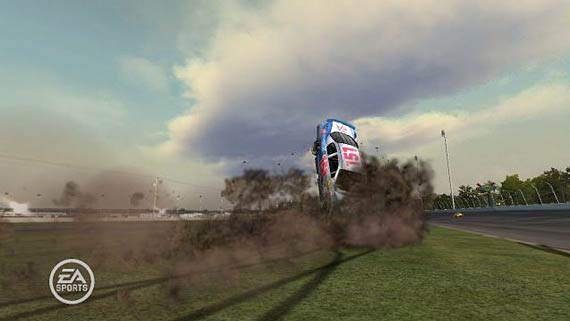 Parents should have no trouble with this game, unless they're anticorporate activists who have some kind of objection to overpowering sponsorship. Be warned, though, although the game has no content advisories, the situation allows for some pretty horrific crashes. There's no blood or anything, but seeing the twisted heaps of metal that cars are reduced to after a barrel roll, it's impossible to not imagine the severe injuries that were visited upon the driver within.

Racing fans who bought the Microsoft Wheel should definitely pick up the game. There aren't too many titles out there to help justify your investment, so take any chance you can get.

Racing fans who didn't buy the wheel: maybe it's time to consider getting one.

Deaf and hard of hearing gamers should be okay. In addition to the presence of clear, informative menus and detailed HUDs, there is next to no dialogue. The only thing you'll be missing is your crew warning you that your driving is too reckless—sure, it's helpful, but then again, chances are you'll know when you've started smashing into other cars.