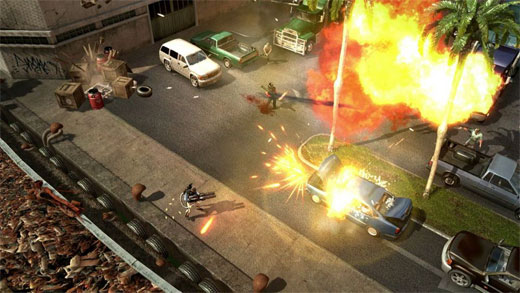 HIGH If you blow up a truck full of soldiers, the soldiers will die.

LOW That is the only way in which an explosion can kill an enemy.

WTF Are bullets just flying through me? What's wrong with this game?

The twin-stick shooter hasn't made a comfortable transition into the world of 3D graphics, and it's easy to understand why. When developers have gone to all the trouble of building a full world with width, height, and depth, they're presented with the temptation to show off as much of that world as possible. This comes into conflict with the cardinal rule of twin-stick shooters—that the camera must always (or at least mostly) be pointed straight down at the action so that it's always crystal clear how to target an enemy. Start shifting the camera around and putting it down at ground level, suddenly the player has no idea how to aim their fire. Add in enemies placed at varied elevations, and the whole thing degenerates into a Narco Terror-level disaster.

Narco Terror filters a modern tale of American colonial adventurism through a lens of late-80s arcade action. It seems that the DEA has begun sending drone strikes to South America in order to blow up drug plantations. The drug lords, understandably upset with this development, kidnap the daughter of the DEA chief in order to force him to stop the program. Instead of complying, the chief decides to head south and personally kill every member of the cartel. The cartel, rather than simply killing the daughter as they'd threatened, hang out and wait for the chief to arrive in groups of five or six.

As I suggested, the core gameplay of Narco Terror is a complete wash thanks to difficulty targeting enemies, a camera that does a terrible job of displaying the action, nonsensical vehicle sequences that feature some of the worst collision detection I've ever seen, and more… there's nothing this game attempts that it can't manage to badly mess up.

In fact, certain elements are so terrible that they defy logic. Cash (used to power up guns) can only be obtained by blowing up cars and fuel canisters. Sure, that doesn't track logically, but it's an acceptable reach—what's less bearable is the fact that those explosions only serve the purpose of giving the player money. In a move that flies in the face of all the rules of video game design, those explosions don't hurt the enemies standing nearby. Further, there are suicide bombers that rush the player and detonate vests full of dynamite. If they're prematurely detonated by a bullet while standing in a crowd of foes, they won't take anyone with them. This is just jaw-droppingly bizarre.

Along with all its other problems, Narco Terror is just outright dull. There are just a handful of enemy types, none of whom even bother to vary their costumes as the game progresses. In addition to four main weapons, the player can come across some bonus pickups, but they're strangely scarce and only appear twice each in the entire game.

The one attempt at mixing up the gameplay strategy: four types of special bullets that the player can collect and use at will. However, even this goes wrong. In what borders on a game-breaking error, the bullets can all be activated simultaneously, allowing the player to fire a wall of homing, flaming, shock-inducing, armor-piercing lead that will destroy anything, including the game's few bosses, in mere seconds.

The best twin-stick shooters made up for their lack of 3D by adding personality, gameplay variety, and over-the-top ludicrousness. Narco Terror decided to add the third dimension, but then left out anything that might make someone want to play. An interesting choice, but not a worthwhile one. Rating: 2 out of 10


Disclosures: This game was obtained via publisher and reviewed on the Xbox 360. Approximately 5 hours of play was devoted to single-player modes, and the game was completed. Multiplayer modes were not sampled, as I was unable to convince anyone to play this terrible game with me.

Parents: According to the ESRB, this game contains violence, blood, drug reference, strong language. I can't imagine your children will want to play this game, but don't let them anyhow. It's endless repetitious violence that offers zero intellectual challenge or involvement. There are more interesting fireworks shows you could sit them in front of.

Deaf & Hard of Hearing: You won't have any real trouble, as the game has no audio cues! Also, it doesn't matter if you miss out on the plot, because there really isn't one.