Dirtbikes Have Never Been Safer! 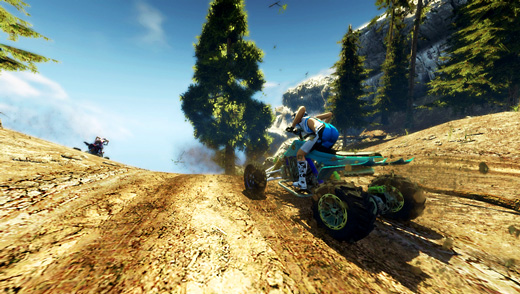 HIGH Soaring preposterously high off a jump then landing perfectly on the roof of a moving train.

LOW Snowblindness losing me yet another race.

WTF I'm the one speeding through the mud at the front of the pack—why is dirt splatting on MY face?

There are plenty of gameplay innovations in Halo that combined to make it okay to play FPS titles on consoles—progressive health, two-weapon switching, a grenade button… for my money, though, the most vital change towards accessibility was the glut of checkpoints strewn about each level. Gamers don't mind replaying a fight until they've succeeded—the gunplay is the good stuff. The thing that irks is being forced to replay the long, uneventful walks back to the places where one has just been gunned down.

? Like Halo, Nail'd's greatest achievement is that it has stripped most of the frustrating repetition out of the racing genre. Where other titles punish a slip of the thumb in the last lap by having all the computer characters rush past (and forcing a replay of three to five minutes of racing) Nail'd is far more forgiving. Crash into a wall? The game pauses and resets the player to the middle of the track. Miss a jump and go crashing to the bottom of a chasm? No problem—the game sends you to the far side, no questions asked. The only penalty ever levied is that the player is reset at a dead stop, and must spend two whole seconds getting back up to speed.

As helpful as this innovation is, it feels like a necessity more often than it should. Nail'd's dozen-plus tracks offer a wide variety of jumps, slaloms, and other stunt opportunities, but many of them are too densely packed with obstacles and sharp turns. No matter how many times I played certain tracks, I'd find myself constantly discovering new ways of wrecking my bike over the course of a race. It's almost as if, knowing that the fair-reset system would jack the difficulty level down a few notches, the developers didn't spend enough time tuning the tracks for playability.

Likewise, there are two glaring flaws that I can't believe made it into the finished title.

First is the vehicle modification system. Beating tracks unlocks new parts for the player's bike or ATV, but none of them are actual improvements. These parts just allow for a different distribution of a finite number of points between categories like air and ground handling or boost acceleration. They all boil down to minor tuning tweaks that affect playing style more than actual ability—and all of the options really should have been available out of the gate.

The second problem is just flat-out bizarre: when the player uses a boost, the colour drains out of the world and the contrast turns way up, washing out the screen as they rocket forward. It's a captivating visual effect… with a huge drawback. There are four maps set on a snow-covered mountain range, and the lack of colour and detail when boosting basically renders the white ground identical to the light-grey walls and boulders. Let's just say that I leaned on the reset feature a little more than usual on these tracks.

the perfect point-of-entry for anyone interested in racing games in general, and the off-road subgenre specifically. I just wish the game had been polished enough that this innovation wouldn't have been such a major part of the experience. Hopefully other developers will pick up the torch and endeavor to make their own racing games a little less sadistic. Rating: 7.0 out of 10.

Parents: According to the ESRB, this game contains lyrics, mild violence. You should find this a relatively safe title. Even if your teens actually enjoy off-road racing the actions featured in the game are so over-the-top and outlandish that they defy classification as imitable behavior. While it features nothing that could be called "partial nudity", a surprising number of the female racers wear bikini tops while speeding through snow fields.

Deaf & Hard of Hearing: You won't find themselves hampered by any audio cues—this is racing at its most basic and accessible, and that includes operating solely on the basis of visual information.