Moe of the Same 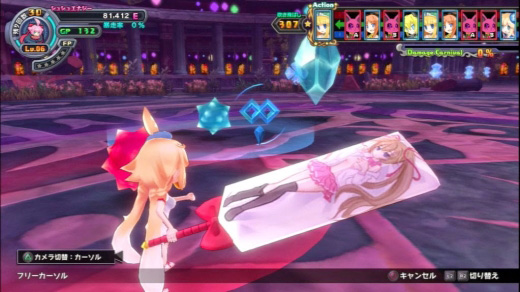 HIGH Overleveling to the point that I could win fights that the plot required me to lose.

LOW A terrible ending, and glitches that kept me from getting a better one!

WTF Attack of the tentacle coffin!

After the rampant plot insanity of the first Mugen Souls, I thought nothing could surprise me in the second game. I was so naïve. The sequel, Mugen Souls Z

, begins with series hero Chou-Chou (God of all creation!) having her powers drained in a grope-happy tentacle coffin, and being reduced to the size of an adorable rabbit monster. Clearly, the writers had every intention of taking everything bizarre from the first game and cranking it up to eleven. Maybe twelve.

Following the basic structure of the previous entry, Mugen Souls Z puts players in the role of a new goddess on a mission to save her solar system from destruction. If anything, this follows the structure of the first title a little too closely, as all of Chou-Chou's hard-won peons are scattered across a dozen planets at the game's outset, forcing returning players (like me!) to re-recruit them and build the party back up to its normal, ridiculously overstuffed state.

The gameplay is largely unchanged since last time, with the various planets in Z being completely empty except for monsters to punch and scripted events to search out. The one interesting development is the addition of skills that can be absorbed from some of the bosses. Earning these abilities lets players go back to previous areas and collect formerly-unattainable loot. It's not a big deal, but it's something.

That said, the developers must realize how dull these field sections still are because the game gives the player a slider in the options menu letting them decide how fast the party moves around the map. When a developer says 'we know you're sick of this, so just blast through as fast as you can', then it's time to start rethinking a game's systems.

Luckily the game's combat allows for billiard-like enemy manipulation around a 3D arena, and gives players a chance to strike enemies in the traditional way, or to send them bouncing around the screen. This is basically identical to the last game's system except that the ‘Captivate' system is now far easier to use.

This mechanic still involves transforming into a personality type that enemies will like and then using a series of 'fetish poses' to win their love, but in this revamped system, it's much clearer what the effect of poses will be. Also improved is the airship-to-airship combat. The comments that characters make before each round now reflect what move the enemy is going to make, which gives the player a chance at using actual strategy, as opposed to random guesswork.

Mechanics aside, the story remains largely comedic. The characters flit from one planet to the next while getting into wacky conversations with the inhabitants, and finish by fighting a boss and moving on to the next planet. The light humor is well-written, and fans of the first game will find its fetish-heavy sensibilities recreated here. Unfortunately I can't speak to the overall storyline due to a glitch in the game.

As in the first Mugen Souls, the key element to the best ending is not found on any of the planets, but in the Mugen Field; a 100-level challenge dungeon accessible from the party's spaceship. By exploring the Field, players will quickly level their characters to the point that no enemy in the main storyline can even slow them down, and if players want an ending other than everybody dying, they're going to have to have to get to the absolute depths of it… Or so I assume.

Unfortunately, I was unable to complete Mugen Souls Z in a satisfying way due to a fairly major glitch. I tried playing the game on two different PS3s (one a launch model, one from nine months after launch) and on both there was a severe bug that caused the game to randomly lock up between levels in the Field, making it impossible to get farther than level 20. I've been assured that the developers are working on the problem, but as of right now, the game is simply not able to be ended happily for those with launch-adjacent PS3s, and possibly others.

's charm and the solid writing kept me motivated to zip through the storyline, and the fights are still a thrill… It's just too bad that the deadly-dull non-combat sections and the ending-ruining bug keep me from recommending the game wholeheartedly. Rating: 7 out of 10


Disclosures: This game was obtained via publisher and reviewed on the PS3. Approximately 40 hours of play were devoted to single-player modes (completed 2 times).

Parents: According to the ESRB, this game contains fantasy violence, language, partial nudity, sexual themes. I can just restate my concerns about the previous title here. Yes, it's still a game primarily about about dressing in costumes to appeal to people's fetishes. Which is still… yikes. There's some mild swearing as well, the now-traditional young women (not that ages are ever given…) in scandalous costumes, and plenty of people threatening one another in cut-scenes—the combat, as is de rigeur for JRPGS, is bloodless and harmless. Hey, remember last time, how one character seemed to have an exposed nipple in certain poses? That's still the case. Oy.

Deaf & Hard of Hearing: You will be fine. All of the game's voluminous text is subtitled, and all you'll be missing are the voice actors' performances.